The Gold of Kagan tests the contestants for the limit.

The Gold of Kagan Rally is already hardly thinkable without the two large sand areas: “Africa” and “the Big Brother” barсhans. There are enough sands in the Astrakhan region, but these two nature features are gradually becoming a kind of nature brands of the Astrakhan region for extreme lovers. The fact that a lot of fans gathered on “the Big Brother” well before passage of this point by the sports crews showed how much spectators had missed the competitions after the forced downtime due to the pandemics. The burning September sun, mercilessly beating down the area, didn’t trouble rally-raid fans, waiting the racers in the heat. A hard route of the third day of the race made spectators wait some of the race contestants especially long. Today the vehicles broke down, apart from that accumulating fatigue of the sportsmen began to affect the result. 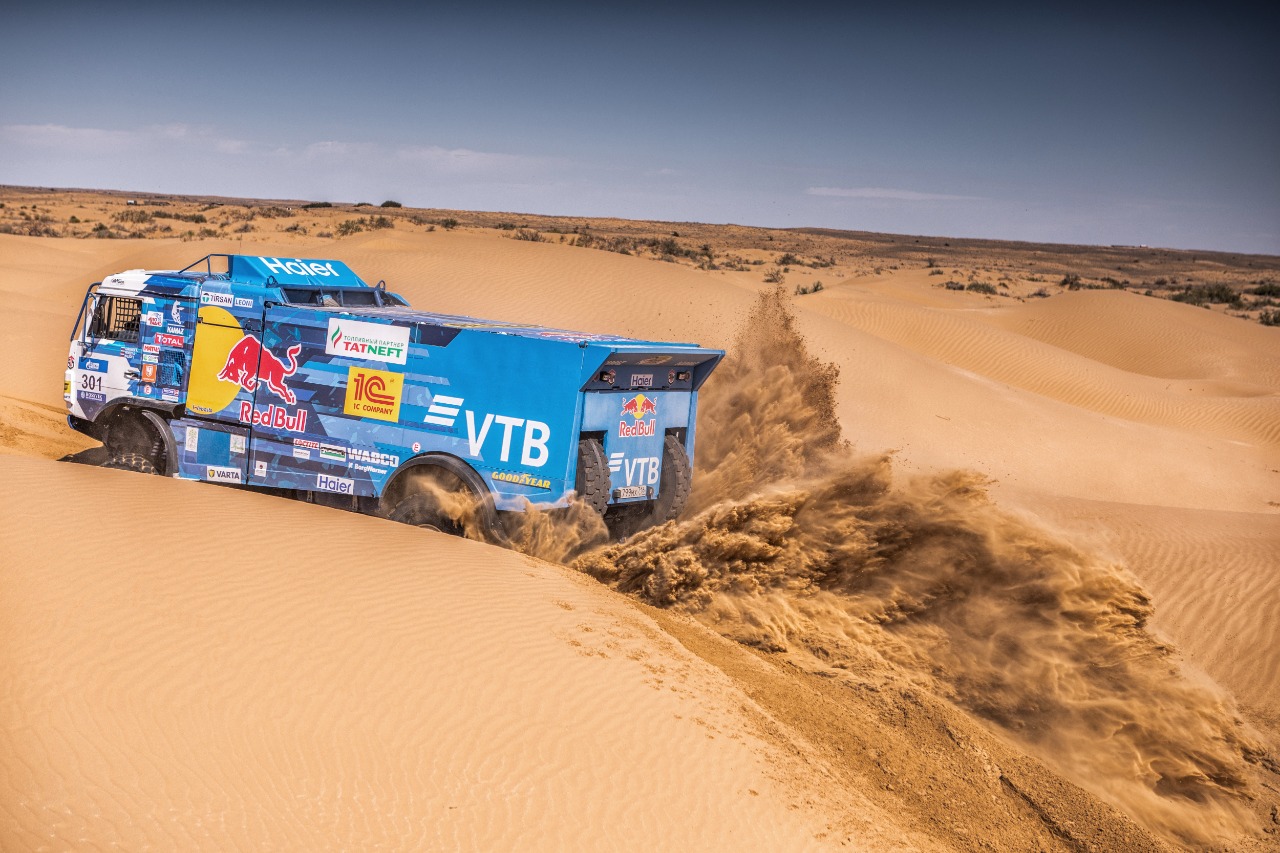 Dmitry Sotnikov’s KAMAZ was first to toe the starting line on the SS-3. The third day of the race showed that his crew was prepared better than others to Astrakhan sands. A good pace and drive without stops allowed him to keep the lead in the race. Almost all other KAMAZ-master crews had stops on the track due to various reasons. 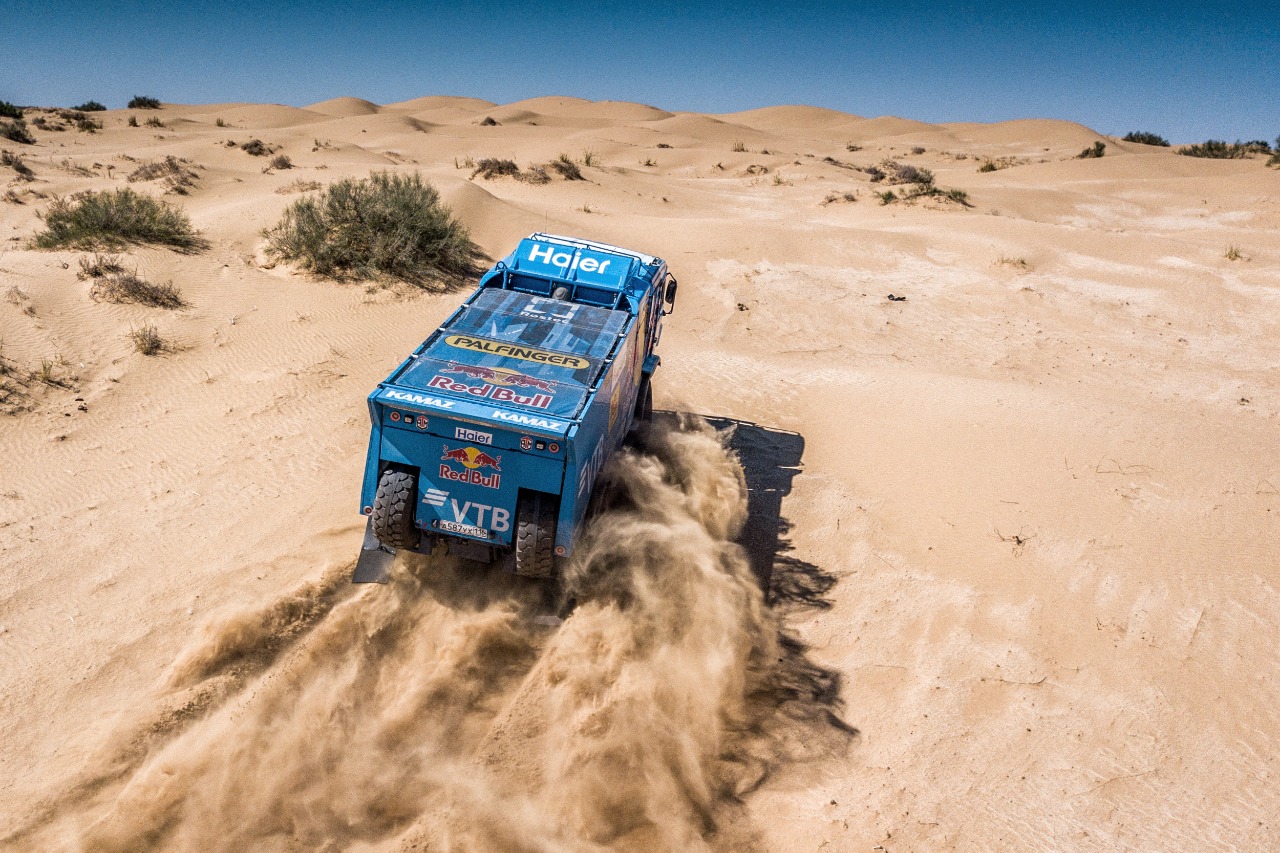 Airat Mardeev, No 303, driver: “The day started very well from the start. We immediately took a high pace. It was easy to go. We overran a few cars, came to Eduard Nikolaev, he let us ahead and we started to forge ahead. We caught up a few more cars, overran one MAZ, then Sergei Kuprianov. We didn’t have any problems by the service point. After 8 km from the service we faced the same problem as yesterday – a sudden loss of power. There also was a strong pop. We stopped, saw a thick white smoke and even fire. We ran quickly, took fire-extinguishers, doused it. We realized that something was wrong with the turbine. Apparently oil got into the exhaust and all flamed out. There were almost no failures. We doused, cleaned, changed the turbine. We lost plenty of time because we had to clean pipes from the shatters. We stood about an hour and twenty minutes. When started, I paid attention that the turbine speed is a bit higher. We started to analyze and decided that we needed to go to the service point. Luckily there were two service areas today. 60 km were before it. I was more careful with the engine. On the service point we started to investigate. We realized that lost a lot of time, but for us the main aim was to understand the reason of the breakdown. We lost 40 minutes, but solved the problem and the rest 80 km drove without paying attention to anything. The pace was good. Hope that tomorrow we will go without adventures and show a good result”.

Eduard Nikolaev, No 300, driver: “One more interesting day. I think that it is the most challenging among the three. Real Astrakhan! A day for suspension. In this competition we don’t only compete but carry out tests. experiential springs and shock-absorbers are installed in our truck. Today the stage showed that the shock absorbers are a bit not prepared to such SS. We had to slow down because it was impossible to keep the pace. There were problems - the truck started to swing. Airat caught us up, and ran ahead. Suspension didn’t allow us to keep after him. We were looking forward to the service area in order to screw up the shock absorbers, change adjustments and continue the second part with the improvements. When we came to the bivouac, we saw Sergei Kuprianov’s gas-and-diesel KAMAZ standing with technical problems with the gear box. We adjusted the shock-absorbers and drove further. We passed three kilometers, saw that Airat Mardeev was at a standstill. The second day he faces problems with the turbine. After the finish we met all our guys. Anton also had technical problems with the fuel system. Andrey Karginov stopped on the service area to change a wheel. We also saw MAZ, facing problems. The bonnet truck entered the service point. His new driver was also driving slowly. Today was a challenging day and the temperature was high, that was very useful for the tests”.

Anton Shibalov, No 304, driver: “The day was quite hard. A lot of hard impassibility. Such a typical Astrakahan, all 300 km. The same type of impassibility without change of a landscape, therefore we had to be especially attentive all 4 hours. There were problems with the fuel system, about 10 minutes we were at a standstill. We will investigate the matter. Generally, all was ok, going further”.

Sergei Kuprianov, No 305, driver: “Our trucks are becoming faster and more and more complicated. Therefore, such situations appear when a crew can’t even understand what is going on. A sign lighted “A valve fault RCS2”. We had to go with it. We didn’t manage to solve the problem on the service area. Therefore, we were driving very slowly the whole special section. But we did two good things. We pulled A.Rudskoy to the finish, who ran out of petrol 10 kilometers before the finish line. And righted an overturned MAZ of our brothers from MAZ. So, the day didn’t go in vain”. 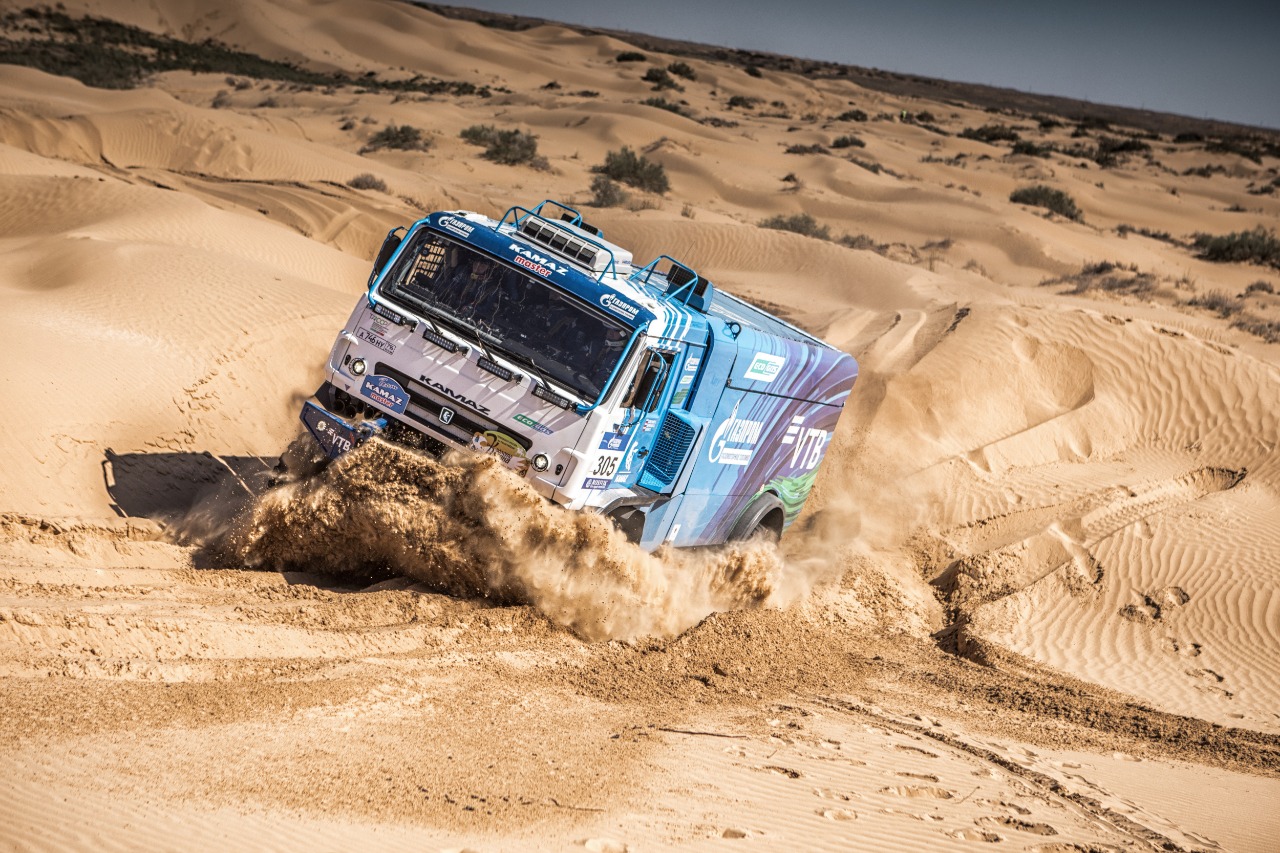 Dmitry Sotnikov, No 302, driver: “As the organizers promised, the section was a bit more complicated and turned out more challenging. I would like to thank the organizers. Vladimir Korolev made a very unusual and various route. The first 150 km before the service area were very-very slow, we were driving for a long time. The whole SS was not fast, the leaders were going at the average speed of 67 kmh. All others apparently were even slower. We chose a “careful” tactics, it was hard to open the stage first. Navigation today was very complicated. And we counted on a steady ride and navigation. And we tried to work out at the maximum all roads with Ruslan Akhmadeev. I think that the tactics proved itself”.

Results of the 3rd stage. Trucks