On April 24, the 2nd stage of the Russian Rally-Raid Championship "Gold of Kagan 2021" started in Astrakhan. This year the off-road race brought together 70 crews in the car classification and 30 contestants in the moto classification.

The competition will take four days: on the first day – ceremonial start and the prologue, on the next three days contestants will have to overcome long high-speed sections. The route of the upcoming race will be a mix of classic tracks of the Gold of Kagan rally from different years with new insertions. The total distance will be 1237 km, 853 km of which will become high-speed SS. 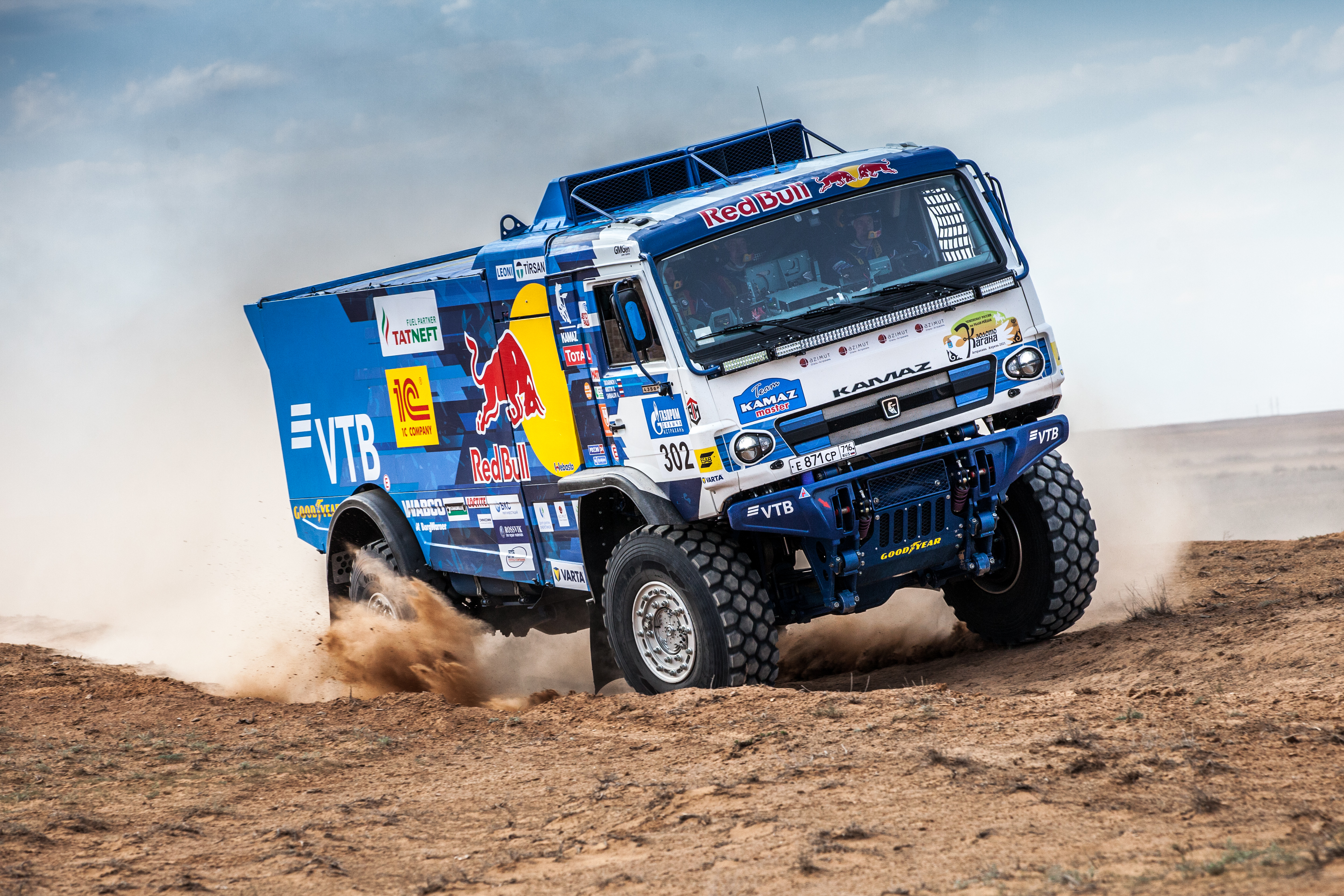 According to the route commissar Vladimir Korolev, the race is developing and the organizers are trying to keep up with the times: “This year we have introduced a number of innovations. Road books will be issued in the morning 15 minutes before leaving the Service Park. Located in the dunes control points WPS will have a radius of 50 meters (it was 90 meters) and differ in color in the road book. "

For trucks, the Gold of Kagan is the first competition in the national motorsport season. KAMAZ-master team traditionally uses these spring starts to test technical novelties after the Dakar in January. But these are not just trainings and tests: the interest to the Gold of Kagan is added by the fact that sportsmen from MAZ-SPORTauto and GazRaidSport teams also come to Astrakhan to compete for the prizes.

KAMAZ-master team will take part in the race with 7 sports crews. 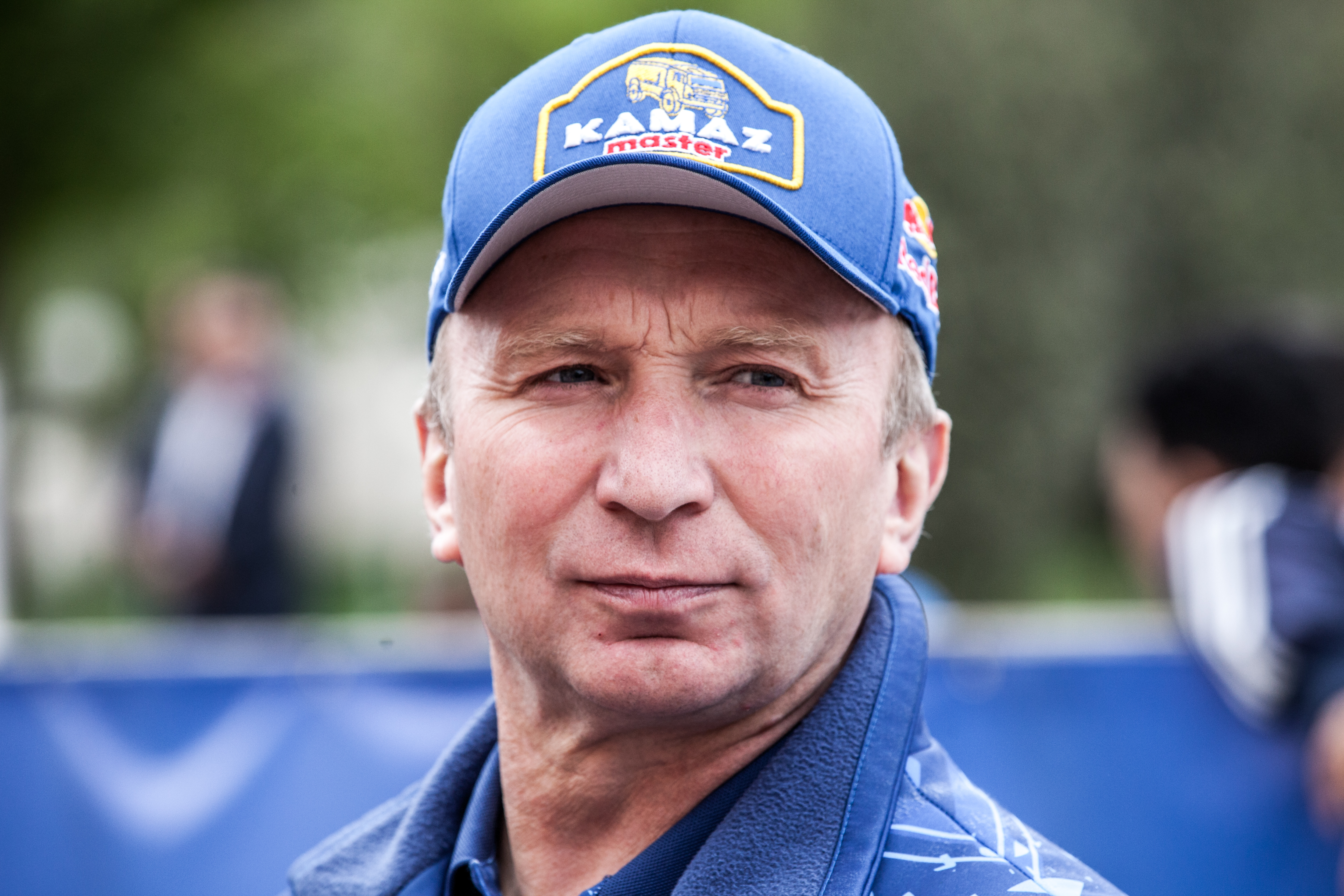 The head of KAMAZ-master team, Vladimir Chagin, said that the number of vehicles is due to necessity to train young team members who have become new crew members: “Several years ago, our team began to develop children's and youth programs aimed at finding talented pilots, mechanics and navigators. And little by little it is becoming to yield fruit. Last year our juniors took part at the Russian championship stages as mechanics and showed themselves well. From the look in their eyes you could see a big desire to be in the team, grow and develop. And the main dream of the guys is still a pilot seat in the sports crew. 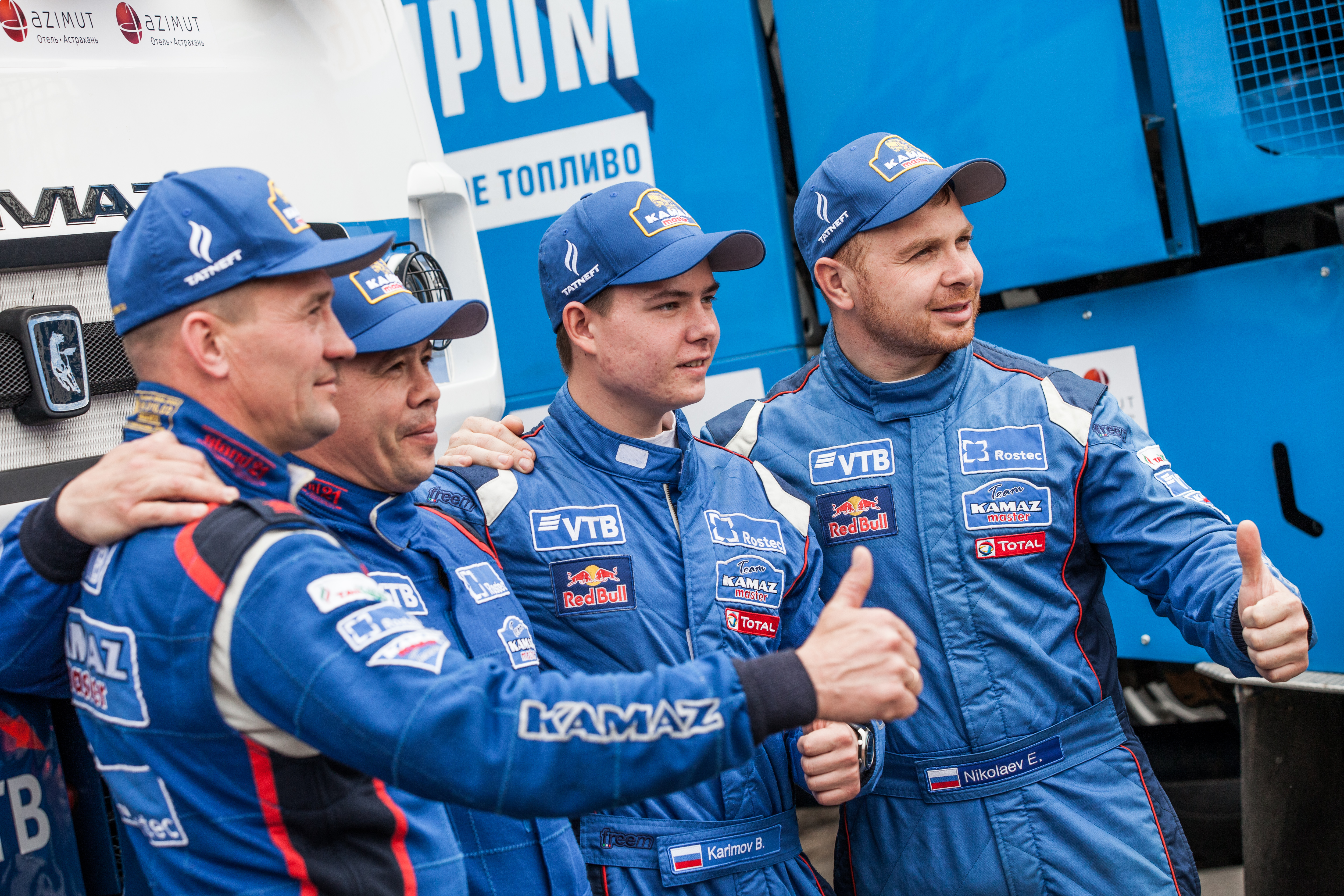 Gradually we came to the conclusion that we can entrust them trucks. And now we are preparing Bogdan to new role for him – pilot of KAMAZ-master team. All juniors, and besides Bogdan Karimov there are Albert Arslanov and Vadim Akhmetov as a co-pilot and a mechanic respectively in Airat Mardeev’s crew, as well Iskander Romanov in the role of a mechanic in Dmitry Sotnikov’s crew, are supervised by our pilots. Eduard Nikolaev, for example, supervises Karimov. Eduard shares his rich experience, shows himself as a good tutor. I think that the current role of supervisors will be easy for our pilots as earlier they themselves were in the shoes of the young guys.

The ceremonial start of the Gold of Kagan traditionally took place at the walls of the Astrakhan Kremlin on Lenin Square. 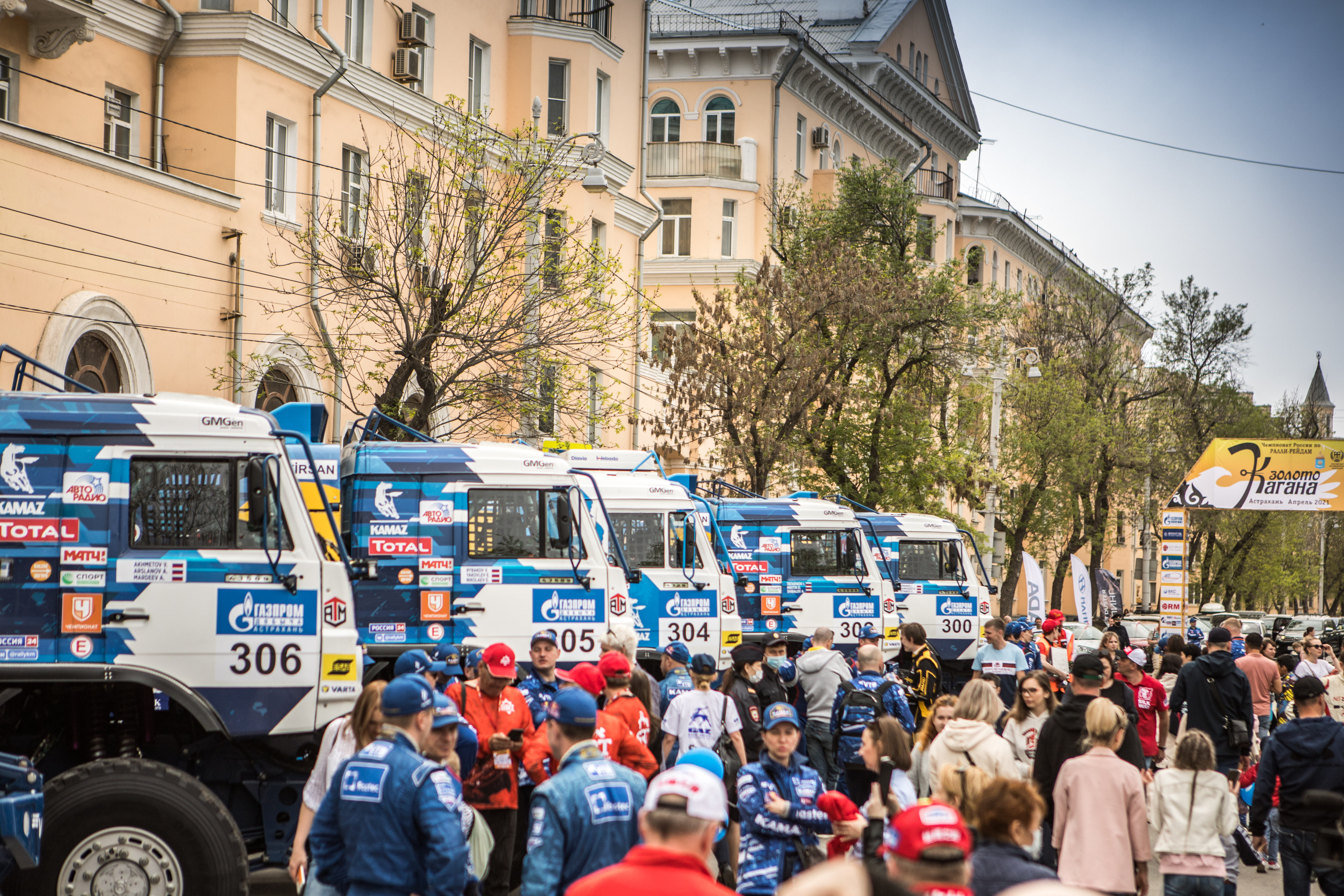 Immediately after the ceremony, the race contestants moved to the place of the race prologue. Its technical 15-kilometer track was full of winding roads with ravines.

The Governor of the Astrakhan Region Igor Babushkin warmly greeted the athletes and spectators, and then temporarily became a member of Dmitry Sotnikov's crew in the racing KAMAZ, who symbolically opened the race. 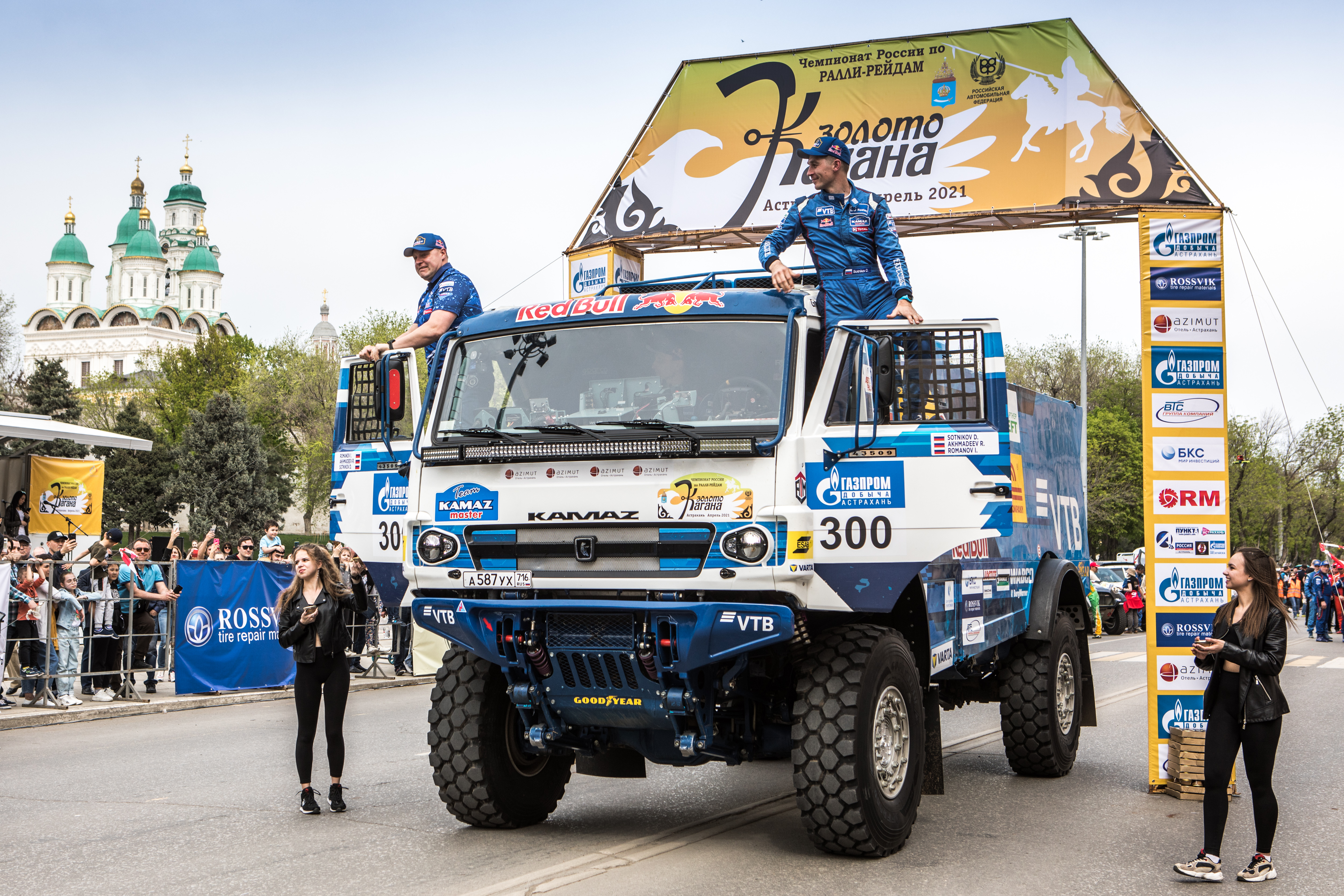 According to the results of the first day of the rally-raid, the crew of Eduard Nikolaev was the best in the truck standings and the second in the overall standings on the track of the 15-kilometer prologue with a result of 9 minutes 29 seconds. Only the crew of Denis Krotov, performing in the passenger competition at MINI, has passed today's track faster than Nikolaev.

In the truck standings, the second and third positions were taken by the Belarusian crews of MAZ-SPORTauto team of Aliaksei Vishneuski and Siarhei Viazovich. Next go Dmitry Sotnikov, Andrey Karginov, Airat Mardeev, Anton Shibalov. The crew of the rookie of KAMAZ-master team, Bogdan Karimov, proved to be quite good. Due to a small navigation mistake, the crew of Sergei Kupriyanov, driving a KAMAZ truck and using a gas-diesel mixture as fuel, passed a little worse.