The eighth stage of the international Silk Way Rally 2019 on the Bayinbaolige-Alashan route took place on Sunday, July 14.

Yesterday, on the day off from the race, the rally participants crossed the border of Mongolia and China, overcoming the path of 551 kilometers. Sunday began with an early departure from the town of Bayinbaolige - already at 6:49 a.m. local time KAMAZ-master crews took the start to the special section. A long liaison of 430 kilometers led the vehicles to the designated point.

Chinese sands and dunes, through which the route passed, are familiar to KAMAZ members for past races. On top of all, overcoming such obstacles is one of the trumps of the Russian team. Not having passed a tenth of the way in the Gobi Desert, the leader of the Silk Way Rally in the truck category Siarhei Viazovich stopped. Later it turned out that the Belarusian crew from MAZ-SPORTauto Team rolled over at 33 km, trying to overcome the dune. The damaged truck was able to drive a couple of hundred meters and stopped, losing the advantage over KAMAZ-master, gained in the previous days of the race. After a while, Viazovich drove towards the start for technical assistance. For him the battle for the podium is over.

Now the first three places in the general standings among trucks are taken by the Chelny team. To keep their position, they need to go at their own pace and avoid mistakes in the tricky sands and dunes. All the crews of the “Blue Armada” got to the finish line without problems, the only breakdown happened to Andrey Karginov - the steering booster broke in his truck.

Andrey Mokeev, KAMAZ-master Team, co-pilot of Andrey Karginov (crew No 300): “Today was a real marathon day with sands, impassibility. The stage was real, “combative”. At the 217th kilometer we had to stop, we felt the smell of oil. It turned out that oil was seeping from under the liner and the pressure was gone, we had to stop and refill, losing a bit of time. We started, but realized there still was not enough oil, steering booster was not pumped over, we had to pour oil again and pump over the steering booster until the end. Losses in time were about 10 minutes. It's a pity, but I think that we passed the special stage perfectly. ”

The best time on the eighth stage was shown by Anton Shibalov - 4 hours 23 minutes 7 seconds, Airat Mardeev was second, Andrey Karginov, 8 minutes 1 second behind, had the third result (+8: 35). Another KAMAZ-master crew, driven by Sergey Kuprianov, became the sixth on the gas-and-diesel truck (+44: 34). The complexity of today's stage is indicated by the fact that only eight trucks reached the finish line.

Anton Shibalov, driver of KAMAZ-master Team (crew No 303): “The day was rather difficult, a lot of off road. This time we had difficult dunes, we had to go from their “sharp” side, which, of course, made driving difficult. The difficulty was in the fact that we were going behind cars, there was no truck tracks ahead. I had to focus on the tracks of motorcycle races, adapt to their style. Having passed these sands non-stop, we coped with our task. In the sands, as they say, one does not win the race, but lose, so we tried to drive smoothly, without stops.

In the beginning, on impassibility, we saw Siarhei Viazovich, we quickly drove up to him, because there was only a minute difference at the start, in the sand he came in front of us. In one place there was a sharp dune, he jumped it slightly at a small angle. It seemed to me that somehow they dived unsuccessfully. We were lucky that we did not go after them, there could have been an accident, some kind of foreboding saved. Already at the finish we learnt that he had turned over on the track. Today we dragged the buggy of Mathieu Serradori, he finished, but something happened to their car on the liaison. They stood with a cable, we towed them to the bivouac.”

In the general classification Anton Shibalov took the lead, his time, following the results of eight stages, is 19 hours 21 minutes 57 seconds. The winner of the race 2018 Andrey Karginov (+15: 56) climbed one line up, closes the top-three Airat Mardeev (+25: 04). Sergey Kuprianov entered the top 5 of the table (+1: 31: 56), he is behind the Dutch Martin van den Brink by 1 hour 20 minutes 23 seconds. It should be noted that Mardeev’s crew was charged a penalty of one minute following the results of the sixth stage.

Airat Mardeev, driver of KAMAZ-master Team (crew No 302): “The task was to drive at the maximum pace, but reliably at the same time, because the dunes do not forgive mistakes. The dunes were not too complicated, the organizers decided not to drive us deeper, I think that this was done consciously, as not much time left before the end of the race. For us the main task now is to bring the result, in such races as the Silk Way Rally and Dakar we don’t arrange competitions between, we go for reliability”.

Sergey Kuprianov, driver of KAMAZ-master Team (crew No 305): “The day is completely different from everything that happened before. Much hotter and the road is completely different, this is not Mongolia and not Russia. There is constant driving up, down, stones, river beds, dunes, camel thorns. All that is needed, a great special stage! ”

The ninth stage of the Silk Way Rally will take place on Monday along the route Alashan - Jiayuguan. The length of the route will be 501 kilometers, and the special section - 290 kilometers on sands and dunes. At the evening briefing the organizers promised a very difficult stage. The rally caravan is approaching to the Gobi Desert. 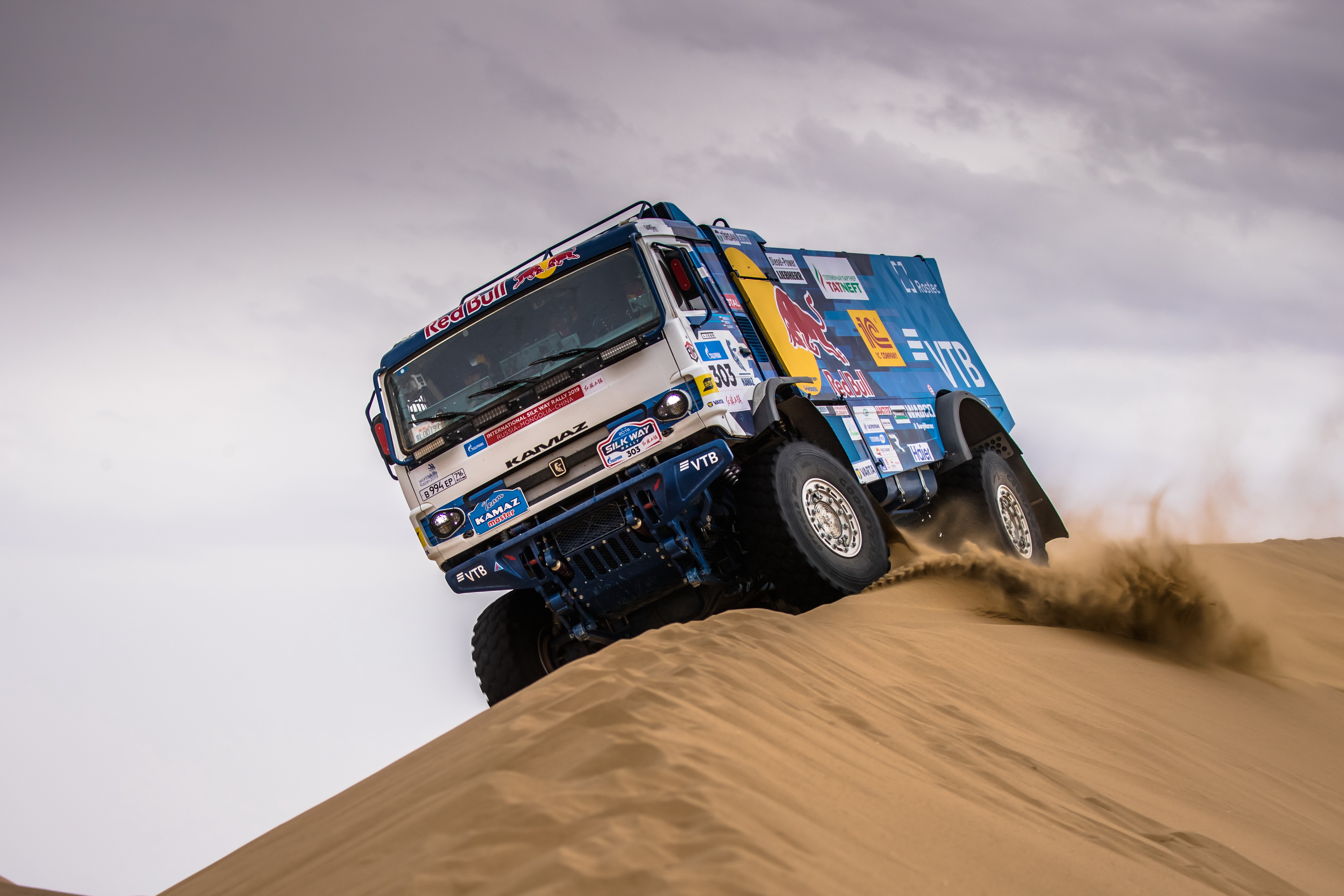 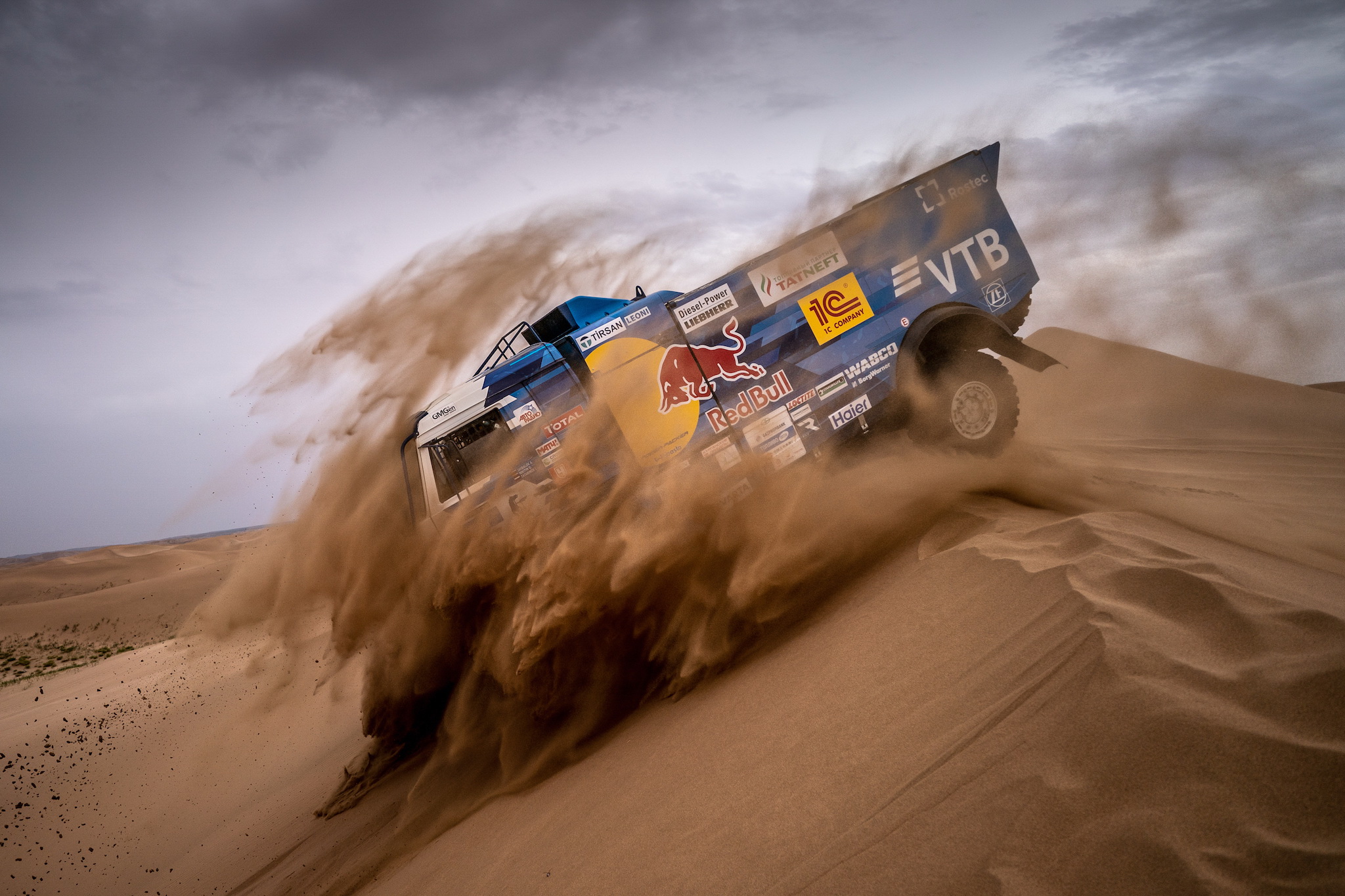