Dakar 2020: Anton Shibalov won on the first stage of the rally

The first stage of the international Dakar Rally 2020 in Saudi Arabia took place along the route Jeddah - Al-Wajh on Sunday, January 5, and ended with the victory of Anton Shibalov’s crew.

Last days before the race passed in anticipation of the start of the rally-marathon. And the fact that the Dakar moved from South America to the Middle East made it a real mystery for sportsmen. Those, who are familiar with local routes and the landscape, are very few. Therefore all crews are in equal conditions.

Already on the first day, the Dakar organizers offered the contestants to feel all delights of rally-raids - no warm-up in the form of several tens of kilometers of a high-speed stage. And 319 kilometers of the special section showed: the battle for high places and the finish will go from the first meters. The defending champion Eduard Nikolaev had to open the truck classification, going to conquer the route of the previously unexplored Arabian Peninsula at 11:50 Moscow time.

And already on the first kilometers the KAMAZ-master crew began to lose pace to their rivals. Later it turned out that Nikolaev faced with technical problems: the air charge cooling fans failed in the truck.

Eduard Nikolaev, driver of crew No 500: “It went wrong from the very beginning. Literally from the first meters, the air charge cooling temperature began to rise. In the dunes, the temperature rose above 100 degrees, and we were very worried, thinking, just to get to the finish line. Having passed the first section, we looked at it, but couldn’t understand what the reason was. We were short of time, so we decided to start in the neutralization zone: if anything, we would repair at a special stage. But I found my pace, analyzed that if I went this way, it would still be faster than make a stop and repair. Thanks God that we reached the finish. At the bivouac, we will puzzle it out. I can say that today we were a little unlucky." 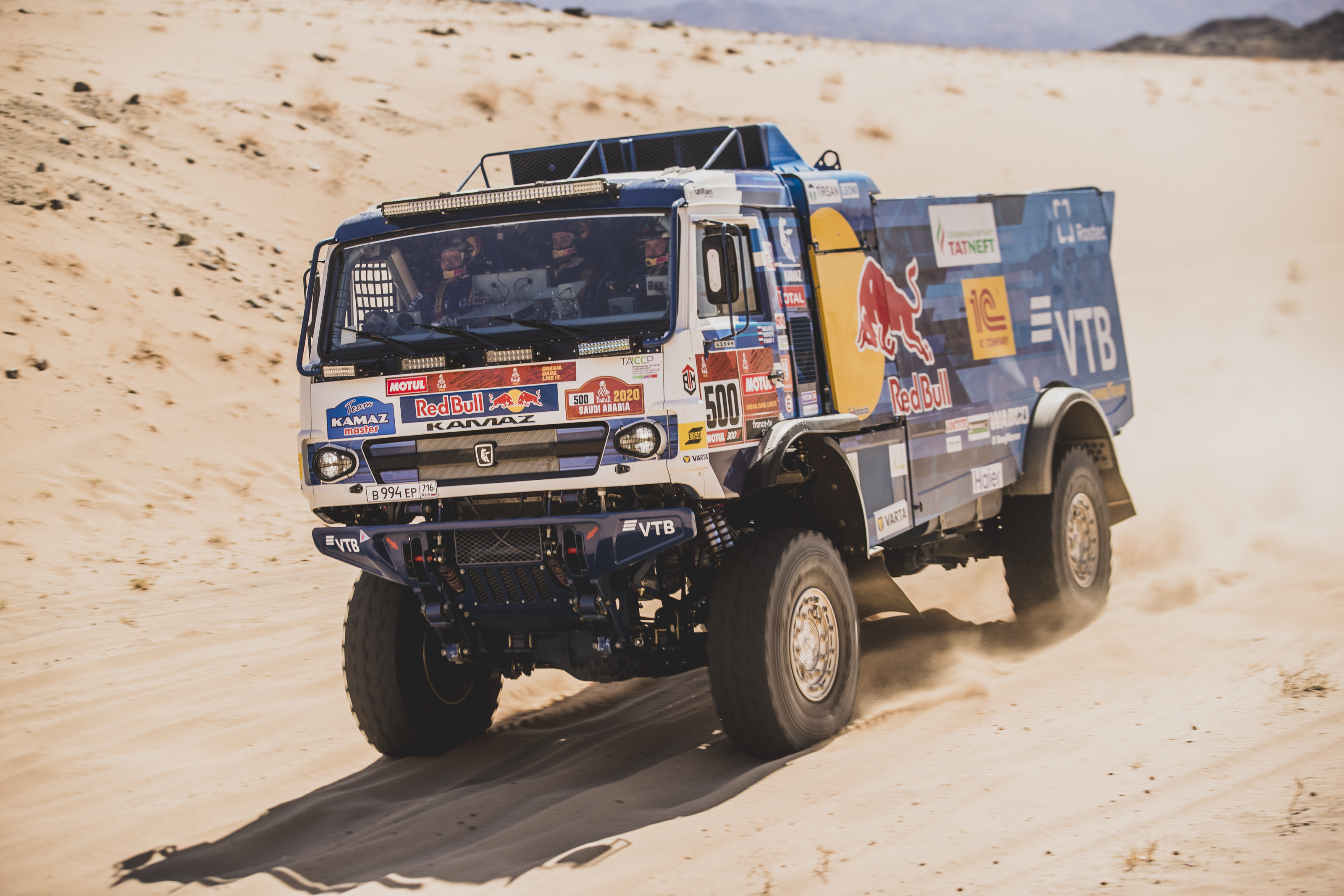 For Andrey Karginov, who won the Dakar in 2014, the start of the 42nd edition of the rally-marathon was more successful. The truck No 511 was confidently leading almost the entire race, but its speed slowed down several tens of kilometers before the finish line, which affected the final result.

Andrey Karginov, driver of crew No 511: “A very stony special stage with a lot of stones. We tried to find our own trajectory, but somewhere we nicked a wheel. For a long time we went on inflation, due to it we had to slow down a bit. We realized that it was better to keep the wheel than to change it, but 35 kilometers before the finish line it could not stand. The replacement took a little time. Our crew had no problems with navigation today, but we saw a whole string of rivals’ trucks going towards us. We understood that they were looking for a hidden point, that we had successfully taken and drove on. There were a lot of overtaking - some let ahead quickly, some didn’t. An additional obstacle was dust, we tried to drive fast, but carefully. Considering that there will be a mixed start tomorrow, there will be less problems with dust and overtaking."

Constantly changing conditions of the route added difficulties in driving and navigation. At the beginning of the stage there were mountain canyons and dry riverbeds, then the terrain changed to dunes and high-speed areas on a sand plateau, final kilometers of the first stage were on sandy roads. In total two-thirds of the way the rally caravan had to spend in the sands.

Best of all with the task coped the winner of the Silk Way Rally 2019 Anton Shibalov, who had performed as a driver of the press car at the last Dakar. At each control point, he improved his position, and on around 294 km he showed the absolutely best time, keeping it till the finish line - 3 hours 40 minutes 35 seconds. The victory was an excellent gift for the head of KAMAZ-master team, Vladimir Chagin, celebrating his 50th birthday on January 5.

Anton Shibalov, driver of crew No 516: “The stage didn’t go without adventures, we drove a bit not as we wanted. There were nuances that held us back. If not for them, the time would be better. For the first day, the organizers made such a special stage, which is usually in the middle of the race. I think all the contestants had a rough time today. Yes, there were tests before the start of the Dakar, but still everything is different on the track, so you can’t predict it."

One more representative of the Chelny team, Dmitry Sotnikov reached the finish line without any difficulties, despite facing a wheel puncture.

Dmitry Sotnikov, driver of crew No 501: “It was not a warming-up today. The first special stage was a real challenge, sometimes similar to Morocco. I don’t remember so many stones for a long time. In some sections there was a real trial. It was necessary to save the wheels, but, unfortunately we punctured one. Today, the most important was to get to the finish line." 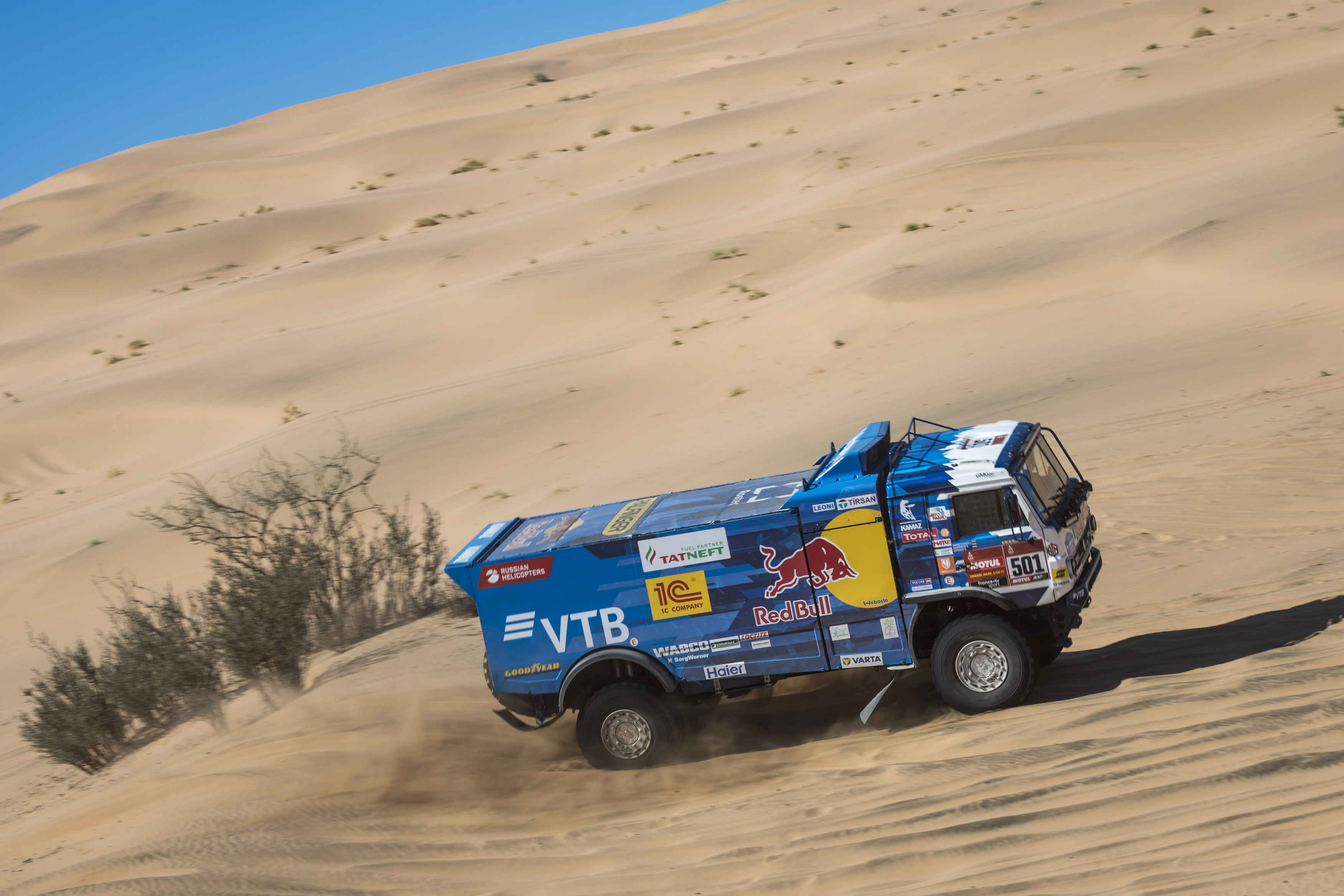 On Monday, the rally contestants are awaited by the mixed start of the second stage along the route Al-Wajh - Neom, which includes 26 km of liaison and 367 km of special stage. A caravan of vehicles will continue its moving to the north of Saudi Arabia along the Red Sea coast.