Sotnikov has won the 15th Dakar stage in his career

The tenth stage of the Dakar Rally 2022 ended with a real drama for several contestants in the race.

Low dunes with soft sand, that would seem not fraught with serious danger, became fatal for two truck crews at once on the starting segment of the 375-kilometer route from Wadi ad-Dawasir to Bisha. Ales Loprais was the first to stop in four minutes after the start. Next was Gert Huzink. For several hours nothing was known about the fate of the crews. Later, from the news reports from the race track, it became clear: nothing threatened the health of the athletes, but their trucks were seriously damaged.

Probably it was poor visibility due to the blinding bright sun that led to accidents - the crews were moving against the light. Hybrid Renault of Huzink while trying to enter the dune stopped on its spine. The bump was so strong that the steel frame of the truck could not stand it, breaking in half right behind the cab. This was the reason for the technical withdrawal from the Dakar reported by the crew. Loprais, in his turn, did not calculate possible consequences of landing after jumping from the dune. The Praga truck, after a hard bump, was able to drive a few more meters and stopped. With sadness in his voice, the driver said that the lack of necessary spare parts for field repairs became a big problem for them, but it was too early to talk about completion of the Dakar.

Riders in other categories also faced the breakdown of sports vehicles. 2021 Dakar Champion Kevin Benavidez broke down in tears as he showed off his broken bike, while Pablo Copetti, who was second in the quad standings after nine stages, ended the marathon after suffering engine problems.

The first kilometers of the sports day turned out so rich in events. There were also accidents on other sections of the route, the starting part of which was fast enough for those who did not deviate from the ideal route and avoided meeting with deceptive at first glance dunes. As the caravan moved to the west of the Arabian Peninsula, the rally gained altitude - the highest point of the route was a mark of 1700 meters above the sea level. On a narrow mountainous road with a large number of stones and barely noticeable passes, truck crews risked losing time not only in replacing punctured wheels, but also in a traffic jam. And getting out of such traffic would be problematic due to the limited room for maneuver. 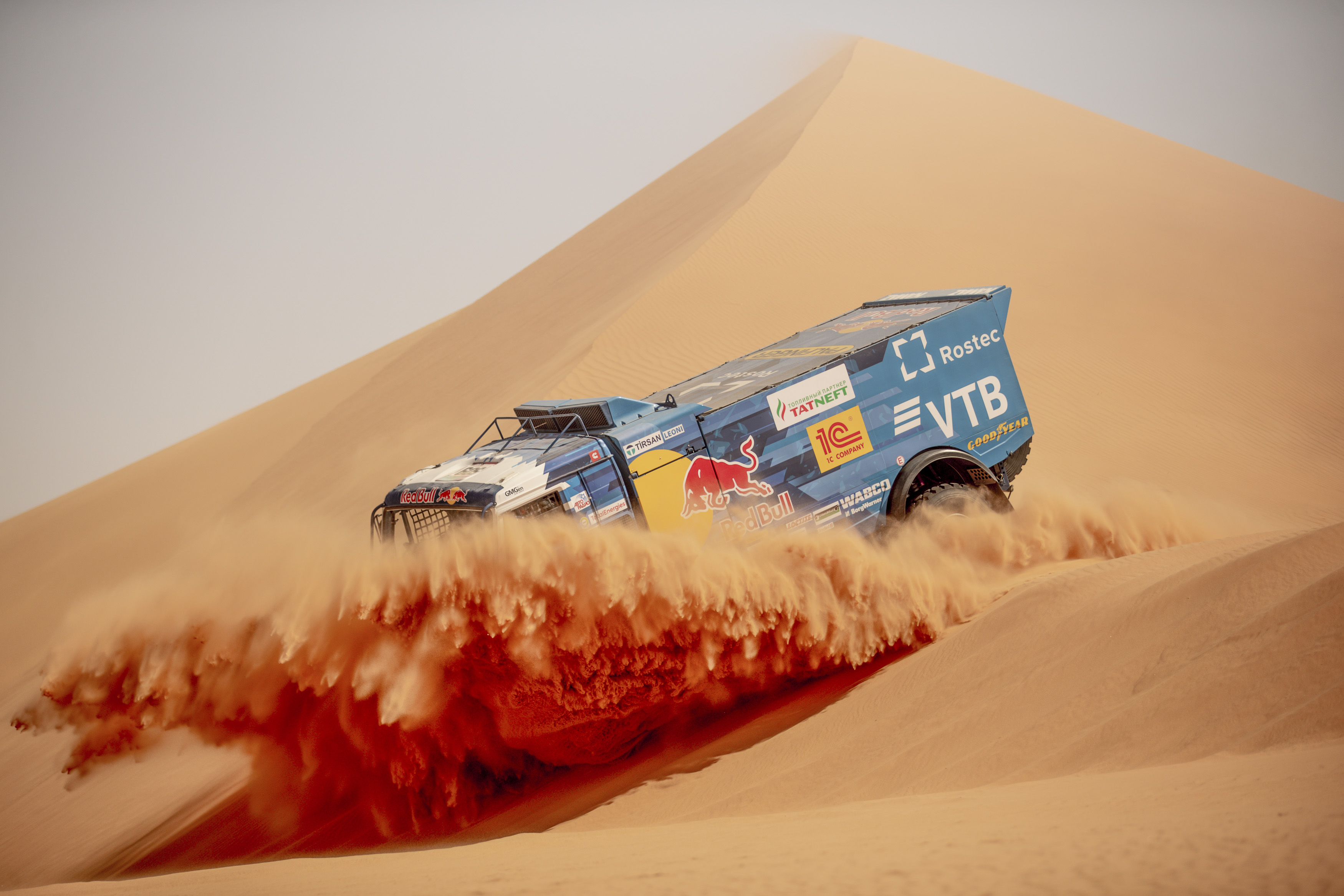 KAMAZ-master crews managed to run through not only the mountainous area, but also dune segments and technical tracks on hard ground without stopping in the first half of the special stage. Racers overcame the final stage through the valleys with a lot of sandy riverbeds and bushes. The latter, as if the sharp claws of a predator, tore apart car bodies.

The best time of the day was shown by Dmitry Sotnikov, increasing the number of his victories in the Dakar special stages to 15 - 3 hours 14 minutes 15 seconds. Being only nine minutes slower than the winner of the moto category Toby Price and 22 minutes slower than Stephane Peterhansel, who won the tenth stage in his car. 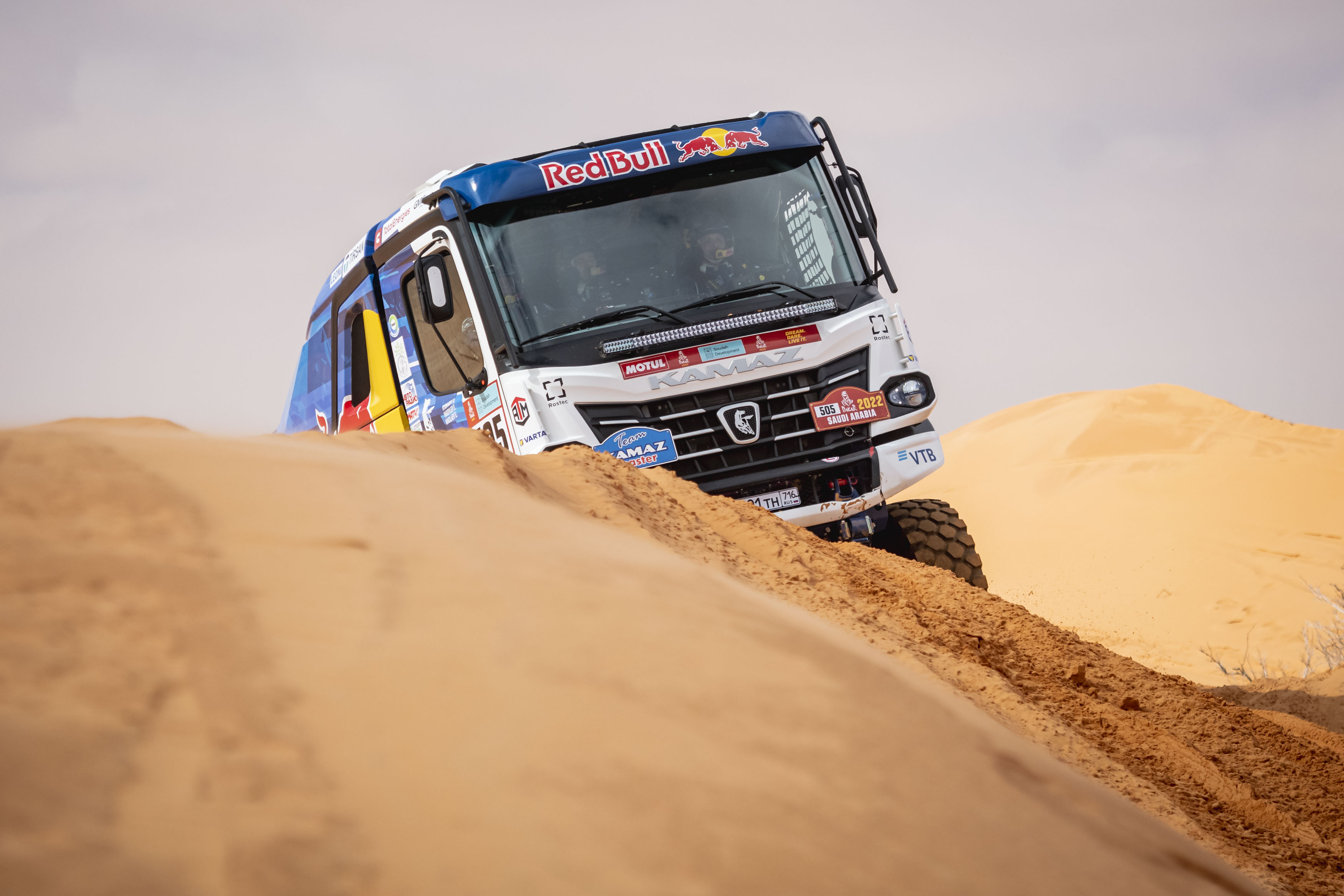 Dmitry Sotnikov, driver of crew No 500: “The first part of the stage was very fast. We started after Eduard Nikolaev, successfully jumped over small dunes. In this area, the fire extinguishing system worked in our truck, we had to open the windows and ventilate the cab. There was one cunning place before the neutralization zone. The hidden point was a little to the right - we left the road and took it, and Eduard had to make a loop, due to which we passed him by. In the second half we drove along a rocky track and a winding path with vegetation. These bushes scratch the body a lot, we could even break the windows, so I had to drive carefully.”

Eduard Nikolaev’s crew had to fight on two fronts - to compete with Sotnikov for the first time and beat possible attacks from his chasers. Dozens of seconds spent searching for a hidden point in the middle of the race threw the Russians from the second intermediate place to the fifth, but the confident passage of the remaining part of the distance allowed them to finish the special stage after the winner of the tenth stage (+1 minute 27 seconds). 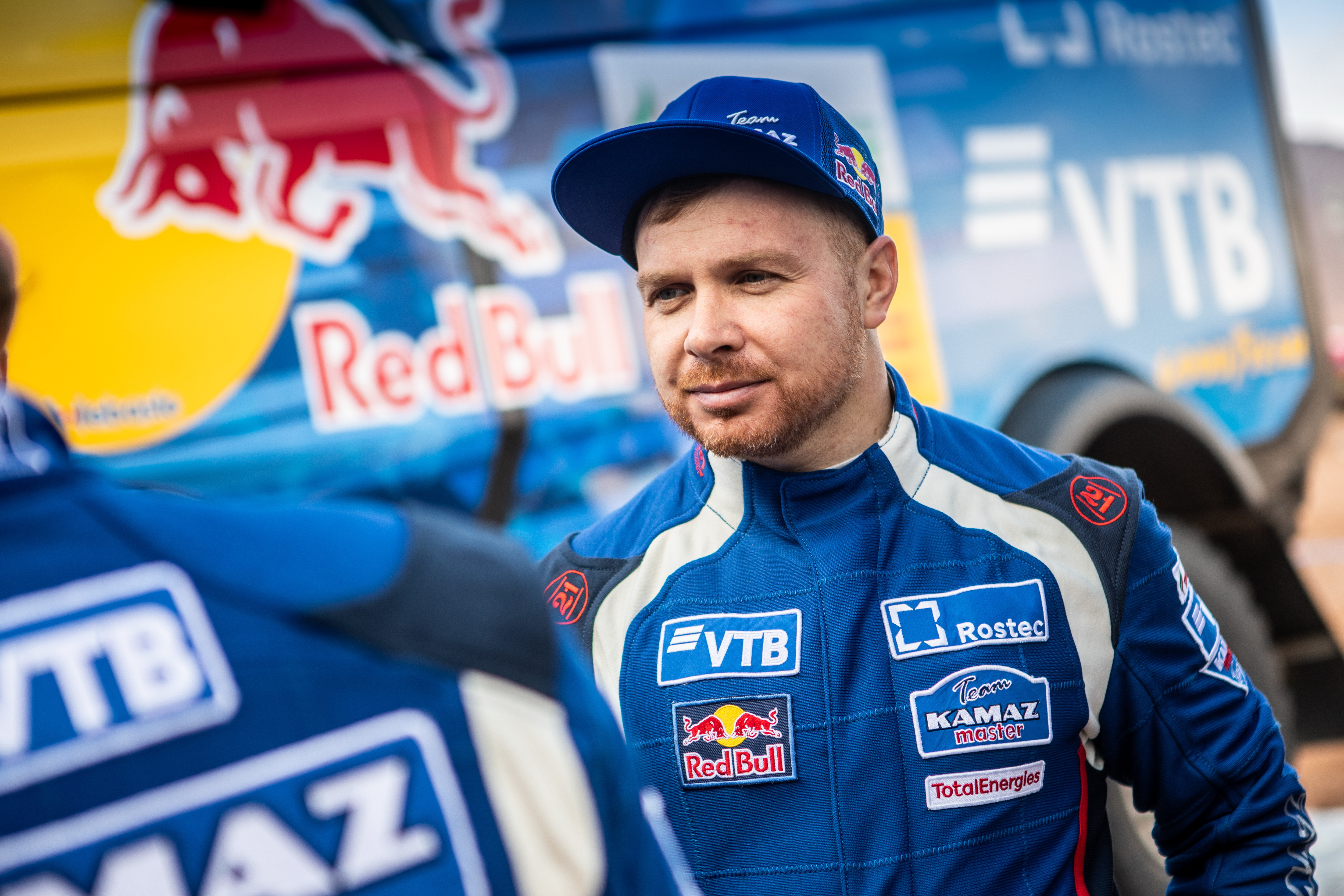 Eduard Nikolaev, driver of crew No. 505 “It was an excellent stage. In the first half we lost a little on the hidden point, we had to do a loop to find it. From the start, the track was faster, with sand. The second part of the route went more slowly - narrow roads through the channels and the mountainous area, rocky sections. Somewhere we could get through quickly. There was also a lot of dust, but everything ended well.”

Another representative of the KAMAZ-master team Andrey Karginov came to the start a minute behind Ales Loprais. And when they saw the Czech crew in the dunes, the Russians could not imagine that the competitor for the fourth place in the general classification was dropping out of the fight. At the finish line, the truck with the number 509 showed the third result, losing almost two minutes to Sotnikov. 46 seconds behind Karginov was Ignacio Casale on TATRA. Anton Shibalov, Martin Macik and Janus van Kasteren were also very close.

Against the backdrop of eminent racers, 19-year-old Mitchel van den Brink looked worthy, for whom this Dakar became the second behind the wheel of a truck. Martin van den Brink's son made it to the top 10 for the second time in his career, losing only 13 minutes to the leader of the truck classification, and has already risen to 11th place in the general classification. 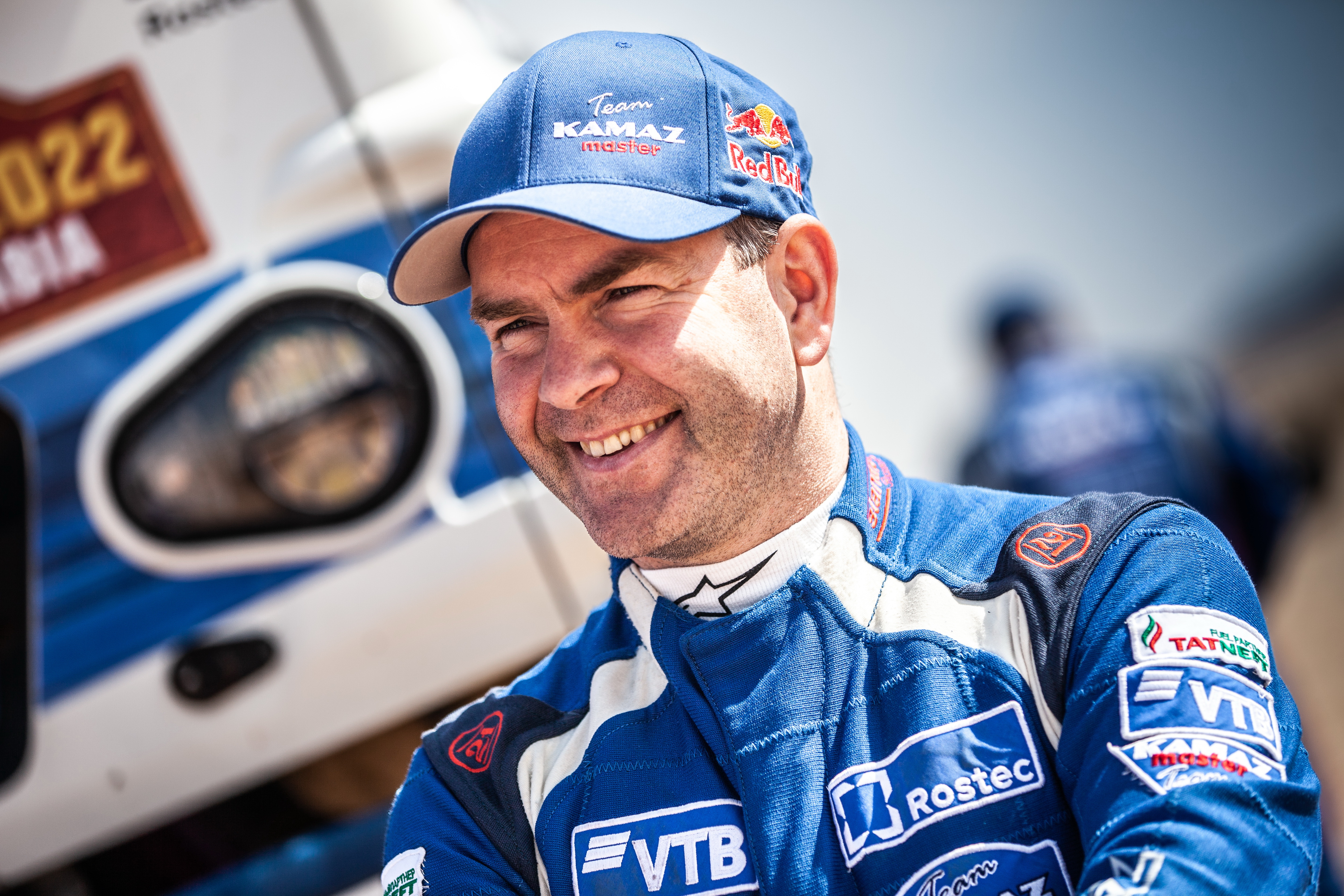 Andrey Karginov, driver of crew No 509: “Today there were a lot of winding roads, stones, and there were almost no dunes. We started behind Loprais, who stopped on the first dune, we carefully drove around him. Almost the whole race was covered in dust, it was not easy to get close to the cars in the canyons, so we tried to pass the special stage carefully.” 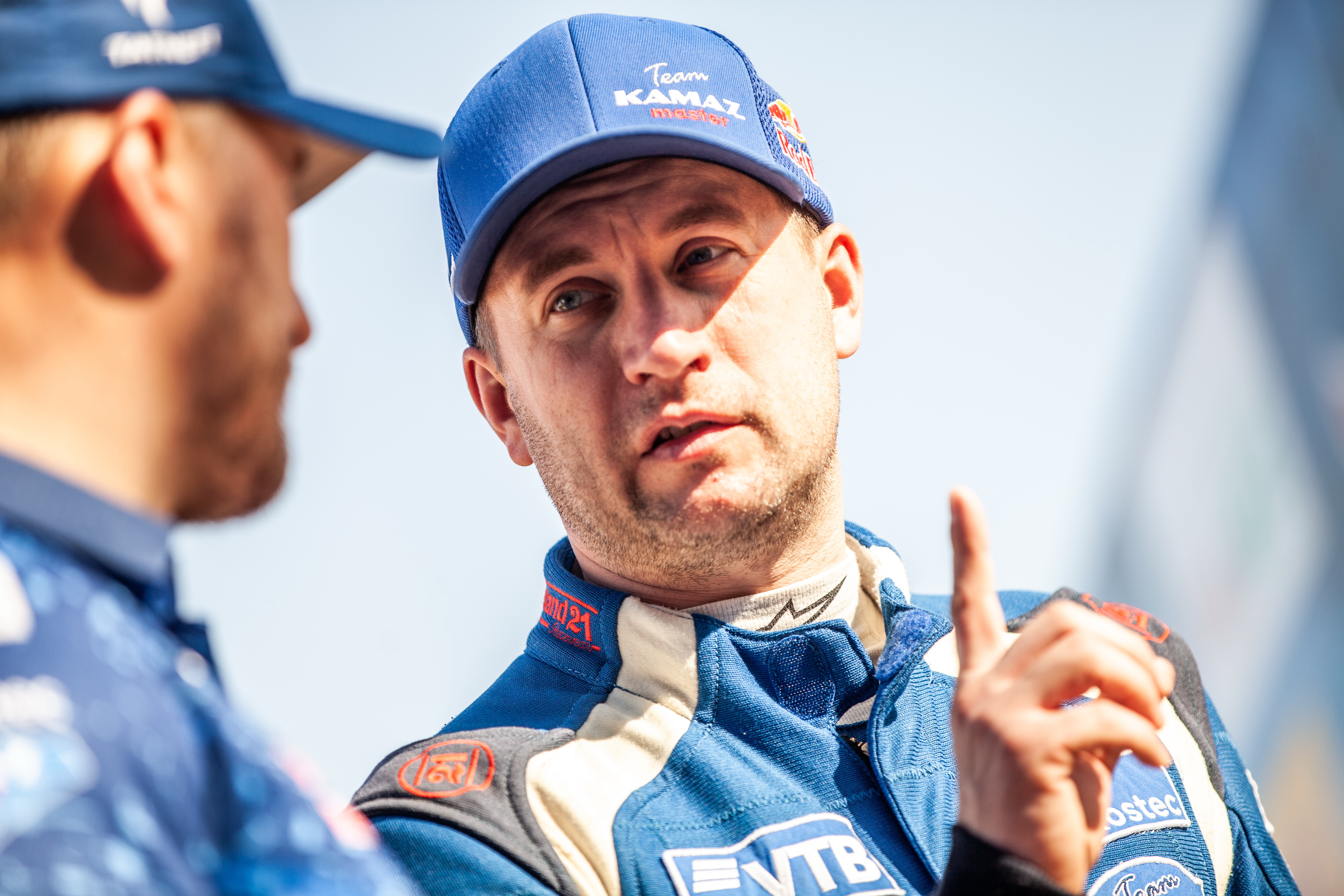 Anton Shibalov, driver of crew No 501: “Today there were very beautiful landscapes and canyons. In the beginning, there were mostly sandy fast roads with a few dunes. We managed to overtake Martin Macik, who was looking for a hidden point longer than us. In the second half of the special stage, we were unlucky in the river bed - we did not have time to go around the buggy, and we had to lose time in thick dust and follow it. Even today I was surprised by one moment. We were walking at a high pace, on the verge of a penalty for overspeeding, but Macik gave a signal from behind, driving even faster. I had to give way."

On Thursday, the penultimate stage is awaiting the Dakar participants. The 346-kilometer loop around Bishy can turn the results upside down. 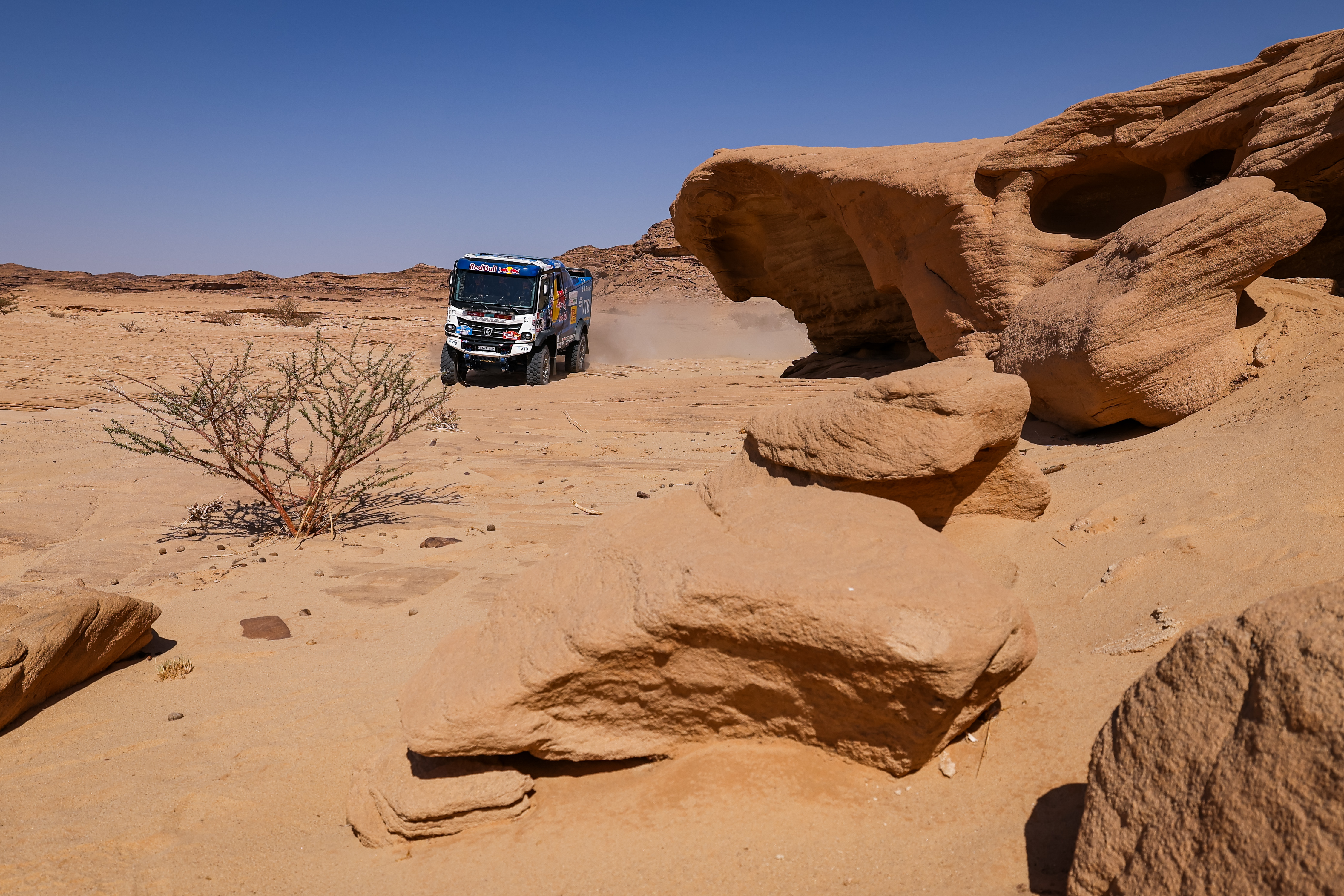 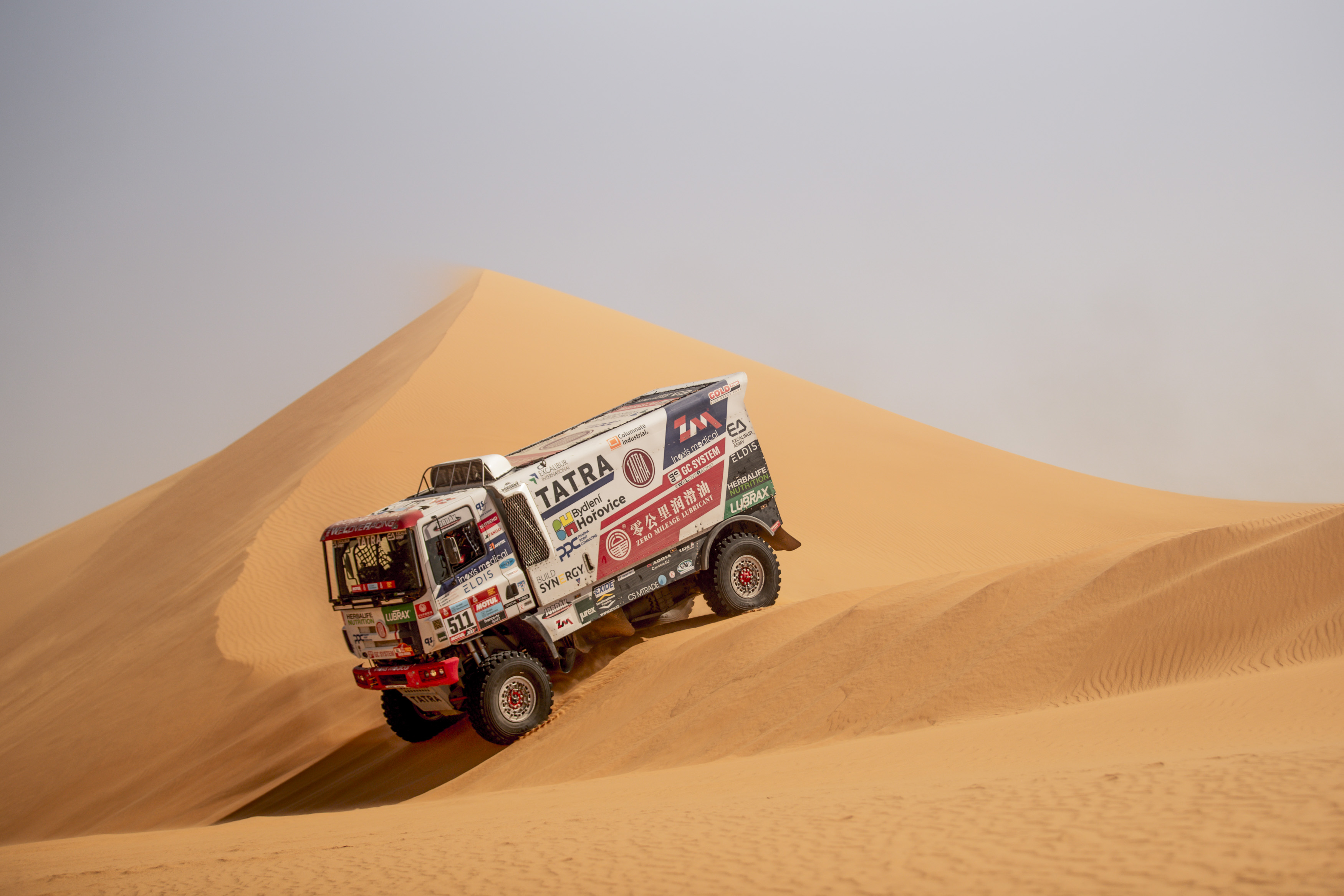