Sprint 164 kilometers on the final day of the Dakar could hardly affect the situation of the contestants, who had created a solid temporary reserve for 11 stages of the rally marathon. And yet, it was impossible to relax on the route Bisha - Jeddah: a long stop carried the risk of losing the earned positions in the general classification, and given the fierce rivalry in a number of categories, names of the winners could not be named until the very finish line.

The track on Friday resembled a mountain serpentine. In the absence of dunes, the rally caravan winded through small canyons, following in tight convoy on technical and winding gravel roads with difficult navigation. A lot depended on the navigator’s work today and any mistake could be fatal. The dust from the cars in front created additional difficulty for the crews - in the limited visibility zone, they had to navigate in unfamiliar terrain covered with sharp stones and constantly changing direction. Abundance of hidden paths added psychological tension among the leaders.

However, it went without unpleasant surprises. At the finish line, the best result of the day was shown by the crew consisting of driver Dmitry Sotnikov, navigator Ruslan Akhmadeev and mechanic Ilgiz Akhmetzyanov. He became the winner of the Dakar rally marathon for the second time in his career.

Eduard Nikolaev took the second place in the truck standings, and Anton Shibalov took the third position. The crew of Andrey Karginov completed the Dakar 2022 fourth. The last time when the team from Naberezhnye Chelny took the first four places was in 2011. For KAMAZ-master the title became the 19th in history. 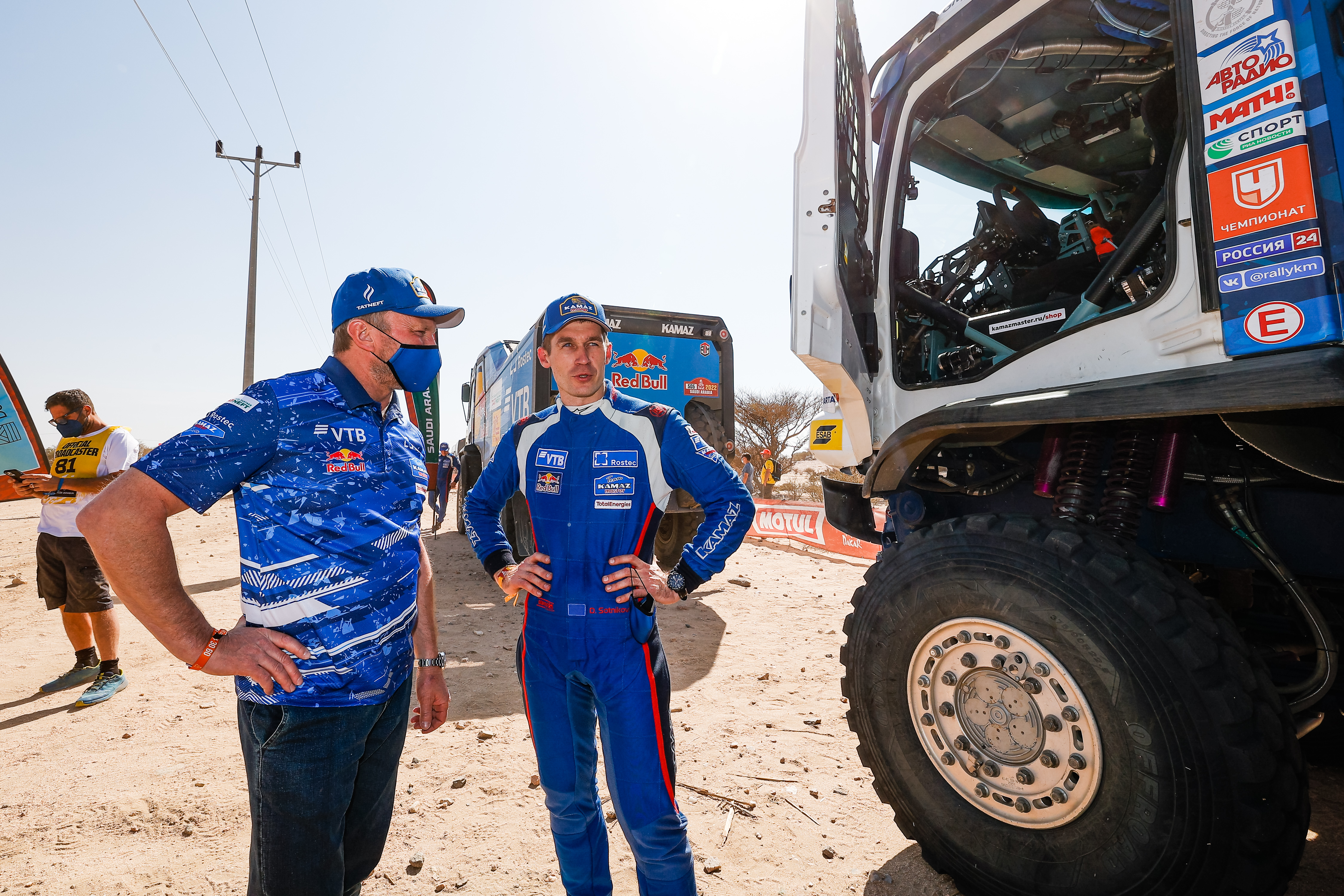 Vladimir Chagin, the head of KAMAZ-master team: “I am happy that KAMAZ-master team managed to prove superiority of Russian vehicles on the roads. The first four places in the truck standings are ours. We are very pleased that two brand new KAMAZ trucks of the K5 family proved themselves in this extreme competition and reliably brought victory to the finish line of the Dakar 2022 in Jeddah.” 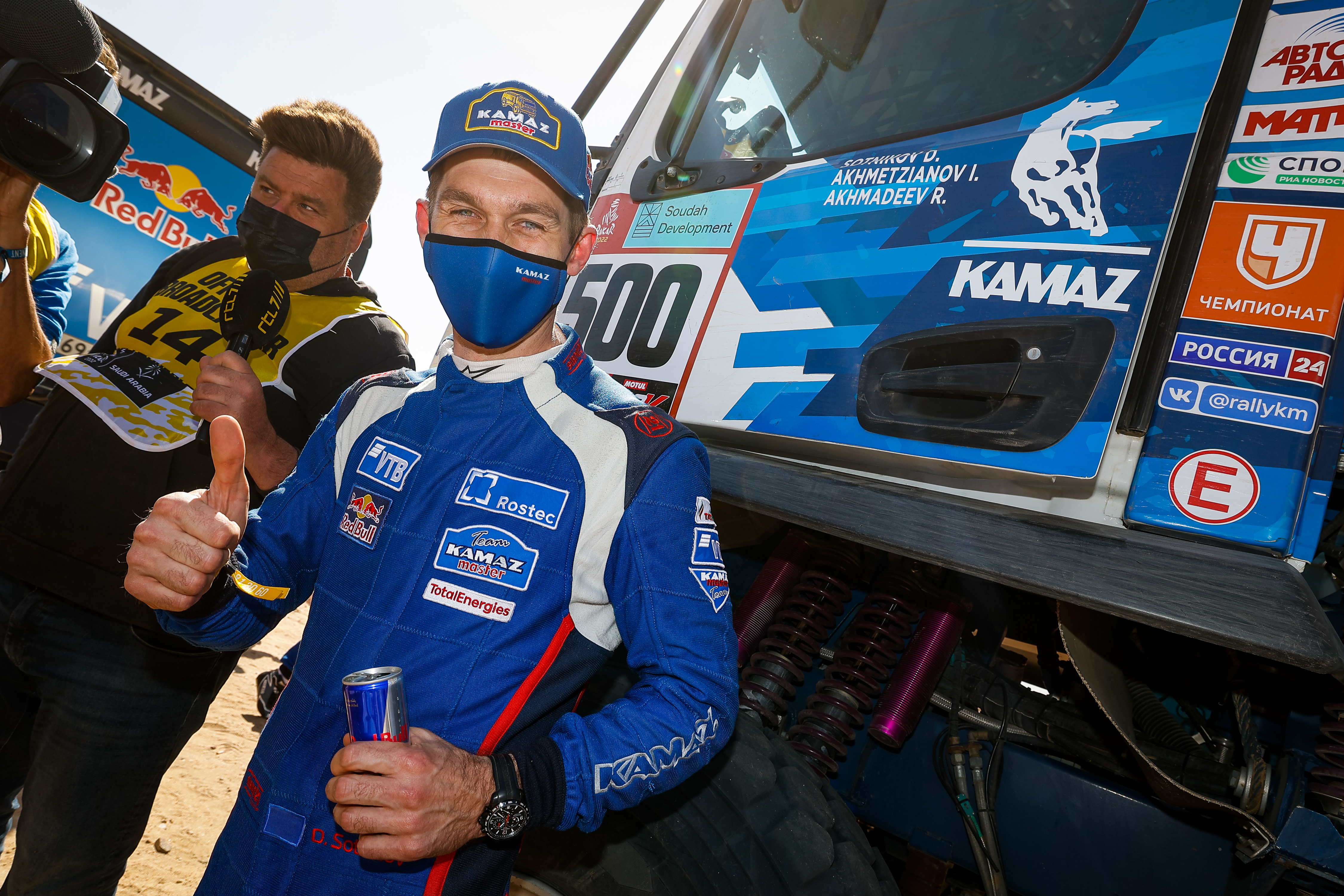 Dmitry Sotnikov, driver of crew No 500: “The race was challenging. It was very different from the previous two in Saudi Arabia. The Dakar 2022 began without a warming-up with the hardest special stages in the sand. The whole team dominated but the rivalry for the victory went every day, and until the last kilometer it was impossible to relax. Even 500 meters before the finish line, we were worried, because it was important to get to the end. We have a new truck, the whole team has worked hard on creation of this truck for the past year. We are grateful to everyone who supported us, this victory is our common result. Russia is the champion!”

Eduard Nikolaev, driver of crew No 505: “Today we drove great along the track. It seems to me that it was more psychologically difficult for Dima Sotnikov, but easier because Andrey Karginov and I were moving in front of him. I know that on the last day you feel restraint, you worry that you can lose time. I had to catch up with Dima, and it was easier for me. I was driving and enjoying the stage. Today I started first, I had to clear the way for the rest - the tracks were narrow, there were a lot of trees and branches, and I beat the truck a little. After missing the Dakar last year, our crew became the second, so we could not catch up. However, our team has gold, silver and bronze - this is the main thing. But there is only one champion, so there is something to strive for next year.”

Anton Shibalov, driver of crew No 501: “For the first time in the last two years, the final special stage went smoothly for us. Everything was fine, the only thing was a lot of branches that knocked all the rubber bands and due to which the doors began to open. I had to stop, quickly tie them. I am very glad that the race ended like this - we are at the finish line in prizes. For many participants, just to finish is already a victory, and our team showed the maximum result, taking the first four places.”

Andrey Karginov, driver of crew No 509: “Dakar turned out difficult and unusual. That's why it is the Dakar, because there are no identical and simple races here. The organizers always come up with some kind of spice. This time it was easier for participants in one - there was no marathon stage. Otherwise, many would have had a different impression of the Dakar. Yesterday's stage, the day before the end of the race, was very impressive. They say here that it's such a joy to just reach the finish line, and if you are at the top of the standings, then the feeling is indescribable. It is great that such race exists. And KAMAZ-master tries every year to maintain a high bar. Salute to the fans, we are thankful for your support. We read your comments, they give strength every day.” 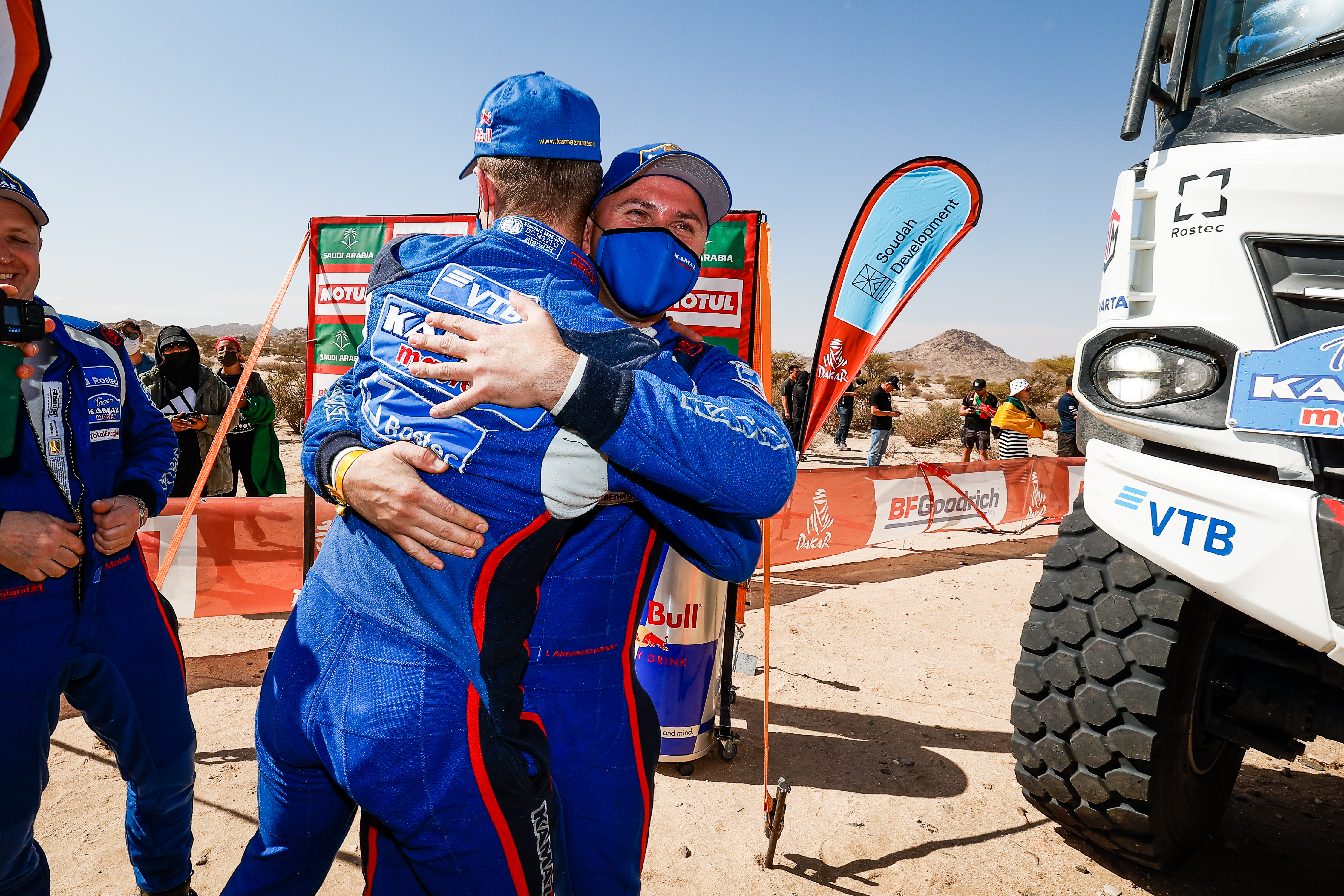 For more than 4200 combat kilometers, intense rivalry for high places in the truck classification was carried out between the crews of KAMAZ, IVECO, PRAGA, TATRA and RENAULT. In the evening, on the shores of the Red Sea in Jeddah the racers will have a ceremonial podium and the awarding of winners and finishers. The beginning of the Golden Bedouin awarding ceremony is scheduled for 19:45 Moscow time.