The main news of today: one of the world's largest rally-raids has begun. The starting point of the Silk Way Rally this year turned out very unusual - the crews set off to conquer long 2900 combat kilometers (and more than 5400 km in total) from the territory of the military post. First by nine in the morning at the collection point, which is 20 kilometers from Omsk, arrived bikers. Several hundred people, accompanied by a folk choir and a local singer of popular songs, happily greeted each athlete. And tanks, standing in the distance, gave the race an entourage and certainly added impressions to everyone.

16 crews entered the start of the Silk Way Rally truck classification. And from the very first kilometers it became clear: the fight for the podium promises to be hot until the finish line in Ulaanbaatar. Almost 90 kilometers, which the organizers assigned for the first high-speed special stage of the race, turned out very fast. Performance of some bike riders on the track reached 177 kmph! At the finish line, representatives of the quad classification spoke about the desire to go faster than the permitted 130 kmph. In the truck category of the Silk Way Rally, the maximum speed was limited to 140 kmph. And any overspeed brought penalty minutes. 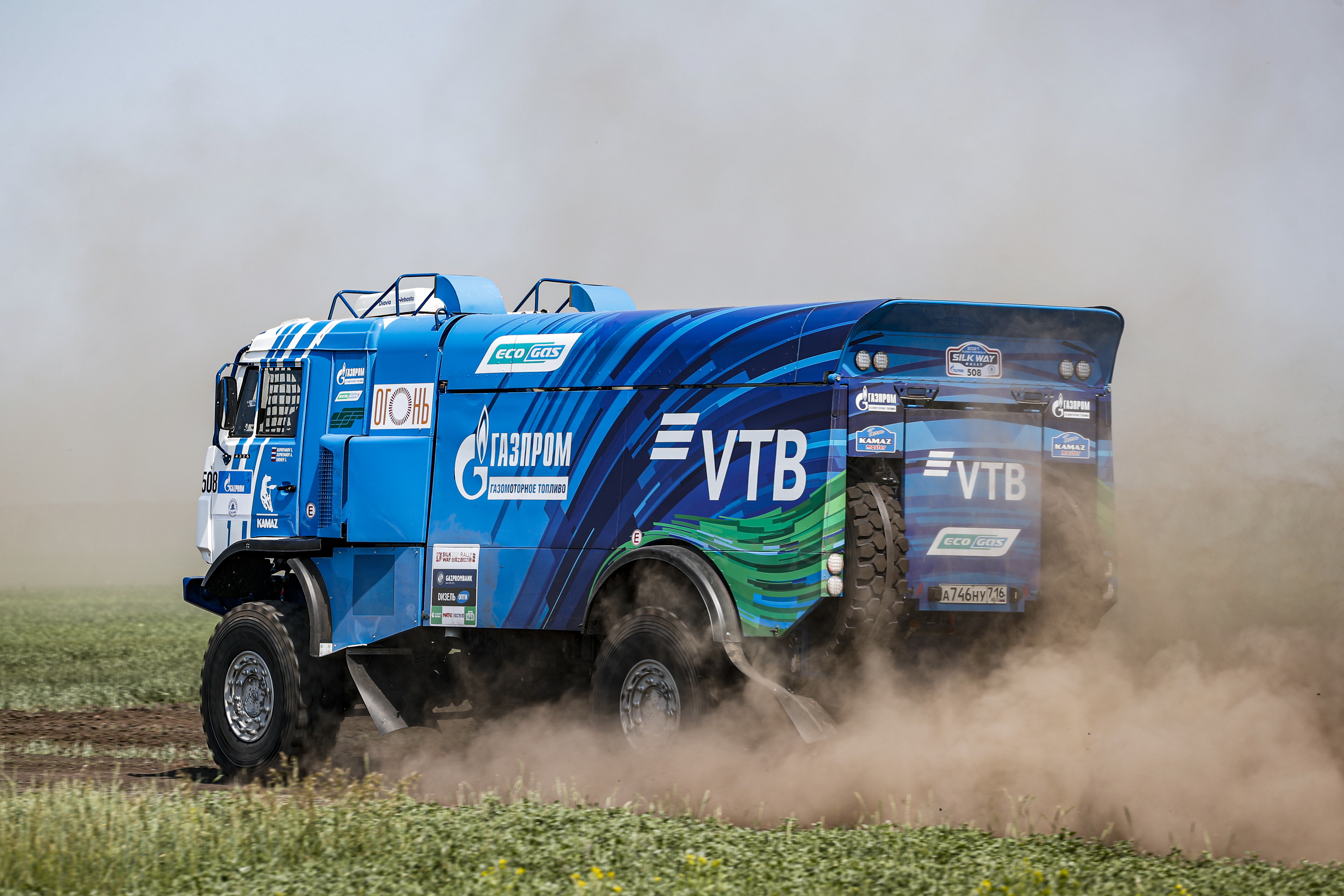 Easy at first glance track, that consisted of fast straight sections through the fields, was replaced by rough sandy surface and sometimes passed through small forests. Navigation added difficulty to the crews - traps for navigators were already at the tank range, and most of the contestants could not figure out details of the route from the first time. So, the experienced crew of the famous Russian driver Vladimir Vasilyev lost about three minutes on this.

The fact that the race route ran at a short distance from the highway, and the drivers, passing along it, could easily see an intense rivalry for the result, making the race more spectacular. High swirls of thick dust indicated not only location of racing vehicles on Siberian soil, but also interfered with the rally contestants themselves: overtaking in such conditions on a narrow road is very problematic and quite dangerous. Moreover, off-road terrain was fraught with many holes, which caused wheel replacement of individual crews. 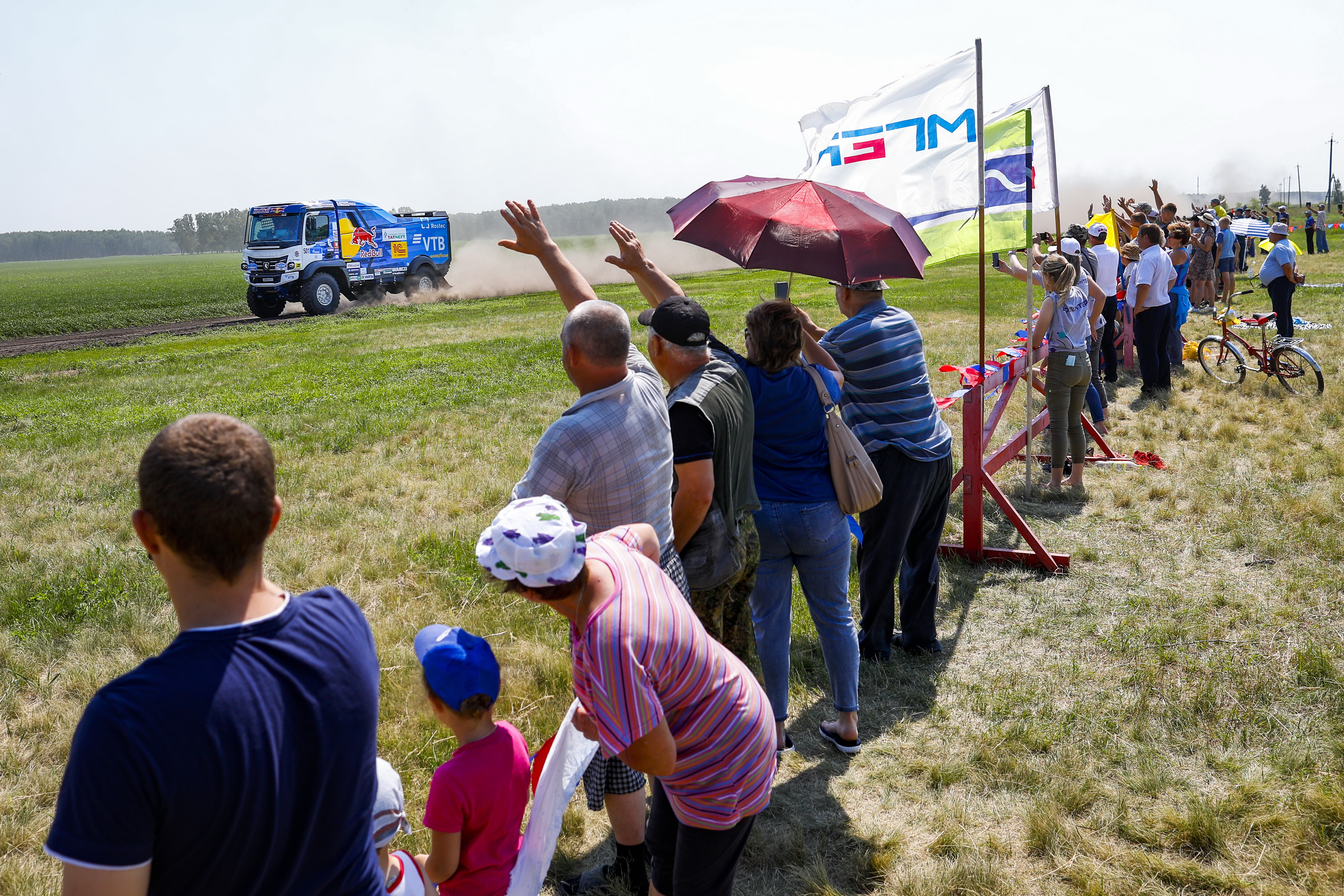 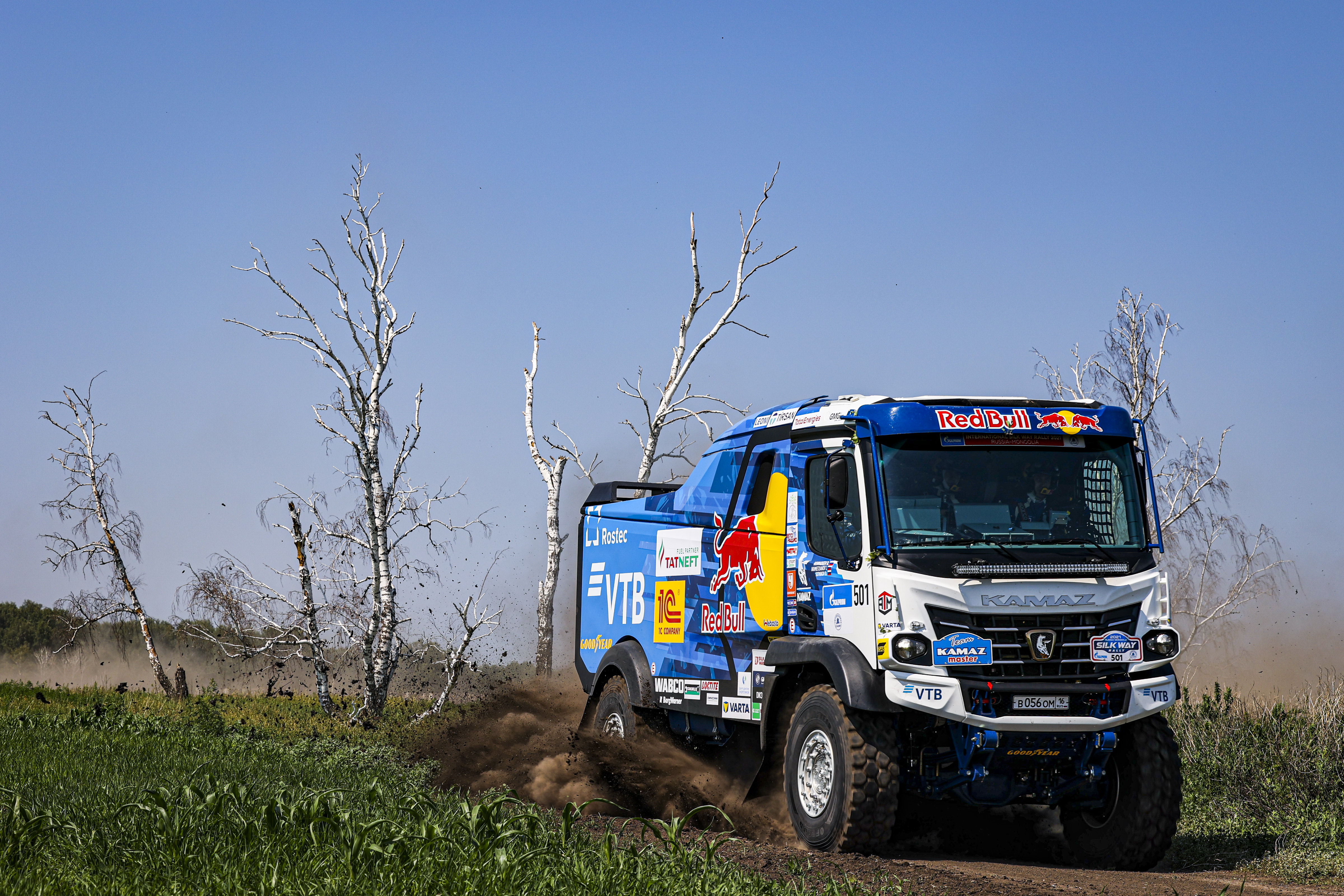 The new K5 truck of KAMAZ-master team, with index 435091, has been a mystery to everyone until today. And on the very first racing day it showed itself from the best side: the current winner of the Dakar Rally Dmitry Sotnikov showed the best time - 50 minutes 51 seconds. Another representative of the Russian team, Airat Mardeev, was in Top 3. The second result of the day belongs to the Belarusian Aliaksei Vishneusky at MAZ, only 10 seconds behind.

Dmitry Sotnikov, driver of crew No 501: “We drove the distance a little with restraint. Currently we are getting used to the new truck, to its performance. It behaves differently comparing my previous truck, here is a different fineness. Once we did not understand the navigation, but quickly returned to the road and did not waste a lot of time. It is important to get into the turn, because dictation of the road book does not always coincide with reality: tall grass, hidden turns, forests - all this has an impact. And you need to find a balance of speed and accuracy. The site today was bumpy and hard, it became a challenge for the suspension."

Airat Mardeev, driver of crew No 505: "Everything is fine with the truck. On the first day, everyone rolled in, although the special stage was such that it was possible to play back a lot. We drove carefully and steadily, there were no problems with navigation. There were a lot of undercutting, which is why many new roads appeared, and it made difficult to find the right one. Although the organizers asked not to cut off. We tried to go along the road. We drove along the course everywhere, Dima Svistunov orientated quickly. The stage was similar to South America: many fields, straight lines, winding roads. It was good, that there was no rain, otherwise all of us would have been washed away. Bogdan drives himself, at his own pace. His task is to gain experience, to drive and not stop, no one demands a high result. "

Driver Bogdan Karimov and his co-driver Albert Arslanov are rookies on the Silk Way Rally. The young crew together with the experienced mechanic Vladimir Rybakov, although they made a mistake in navigation, showed themselves quite confidently, passing the first special stage.

Bogdan Karimov, driver of crew No 513: “Almost the entire special stage we were driving at a maximum speed, only the first 9 kilometers at the tank range were covered in a slower mode, but here solid bumps alternated with holes. At the very beginning we caught up with Mitchel van den Brink. We also made small navigation mistakes, the second of which may have missed a point."

Albert Arslanov, co-driver of crew No 513: “The special stage was generally quite easy. As the organizers promised, it started at a tank range, which was full of variety of rough terrain. Then it went out into the fields, and most of the site consisted of straight flat roads. In terms of navigation, this stage was easy, but, nevertheless, at one of the junctions of unfamiliar roads we managed to turn the wrong way and missed a hidden point. Apart from that, there were no problems, we drove at a good pace. And I will take my mistakes into account for the future.”

Anton Shibalov, driver of crew No 500: “The first day turned out interesting and fast for the warming-up: field roads, a little forest and mud. Today the main thing was to roll in, not to waste time and drive safely. In the very start due to navigation we slowed down a bit. I do not have pressure, being the current winner of the Silk Way Rally. Yes, we won the last race, but now we have a new start, and here we will try to be successful as well. "

Eduard Nikolaev, driver of crew No 504: "We are doing well. We started after Martin Van Den Brink. In the first part there was a strong off-road, we did not have time to overtake him, and after that the road changed to high-speed field sections where it was very dusty. The dust was thick, we couldn't get close. And the whole special stage we were driving in dust: the tracks were narrow and straight, the speed was maximum. We caught up with the Dutchman to the finish line at the speed limit, he let us ahead. Of course, we lost time, but not so much. The whole race is ahead. The truck is okay, as well as the crew. There were no navigation problems. " 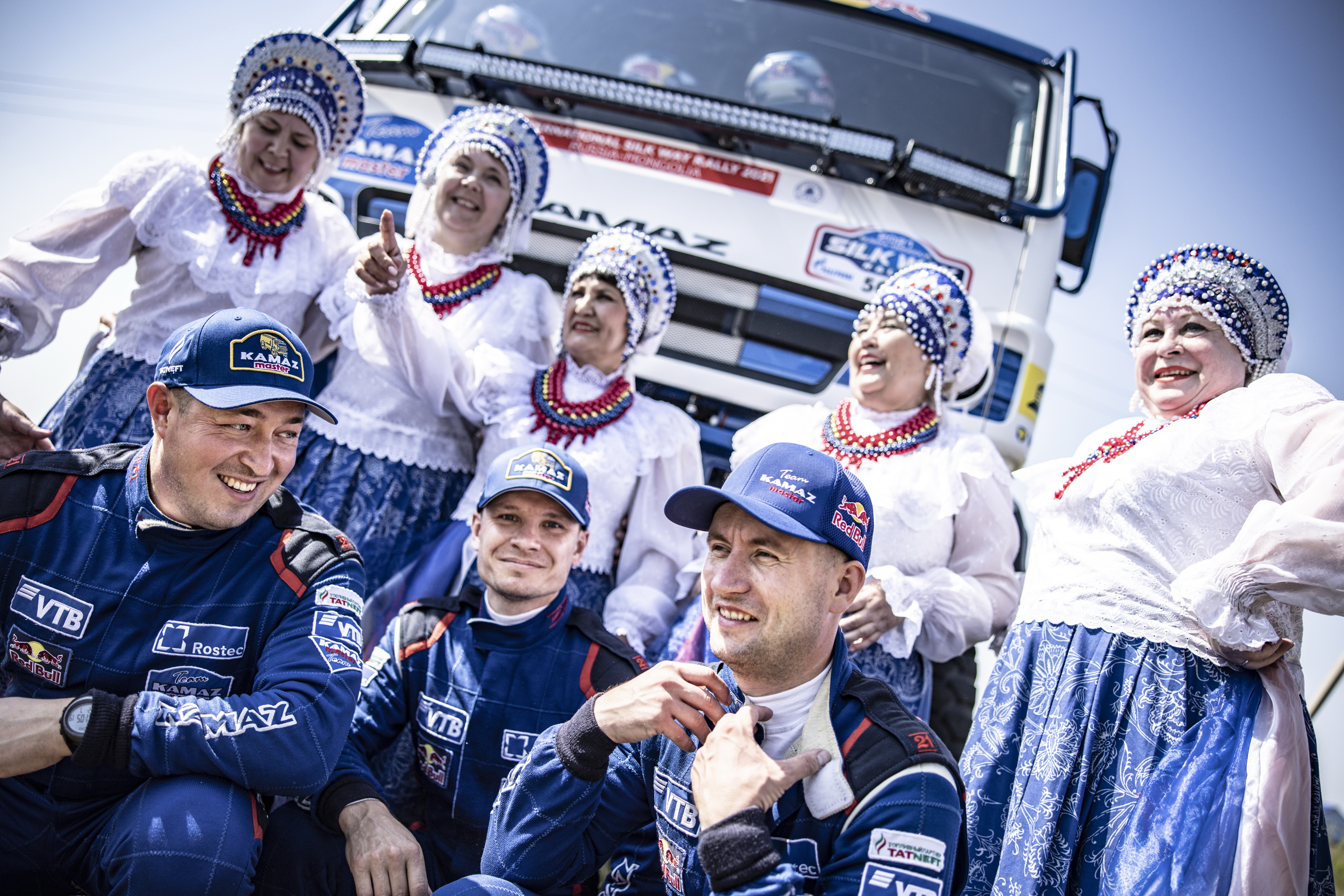 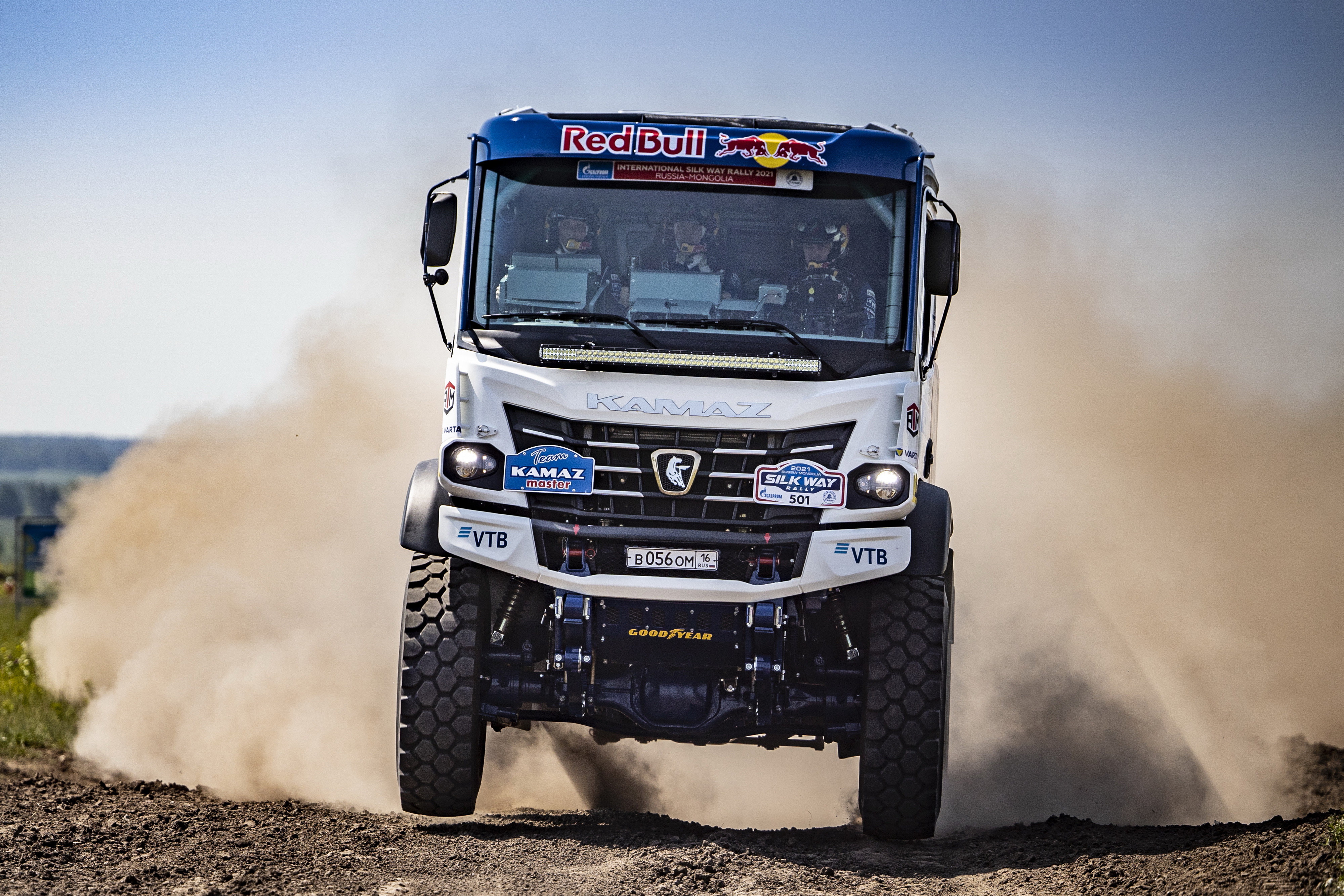