Seventh stage of the Dakar Rally 2020: Karginov, Sotnikov and Shibalov are in Top 3

The seventh stage of the Dakar Rally 2020 in Saudi Arabia took place along the route Riyadh - Wadi Al Dawasir on Sunday, January 12.

The first part of the Dakar, which included almost half of the total distance of 7900 km, continued on Saturday afternoon with the rest day for the race contestants. In Riyadh, the capital of Saudi Arabia, athletes could take a breath after exhausting six stages, and teams - repair sports vehicles, for which last week was a real test for durability.

Moving the race from South America to the Middle East is an occasion to get acquainted with new places on the Earth. Riyadh with a population of about 8 million people is the largest city in the kingdom, its political, cultural and scientific center. The capital derived its name from the gardens (Riyadh mean “gardens” in Arabic). Now, one of the main symbols of the city are the towers - 302-meter Burj Al-Mamlyaka and 307-meter Burj Rafal. And the area of Riyadh, stretching over 1,500 km², is almost 15 times larger than Paris (105 km²). 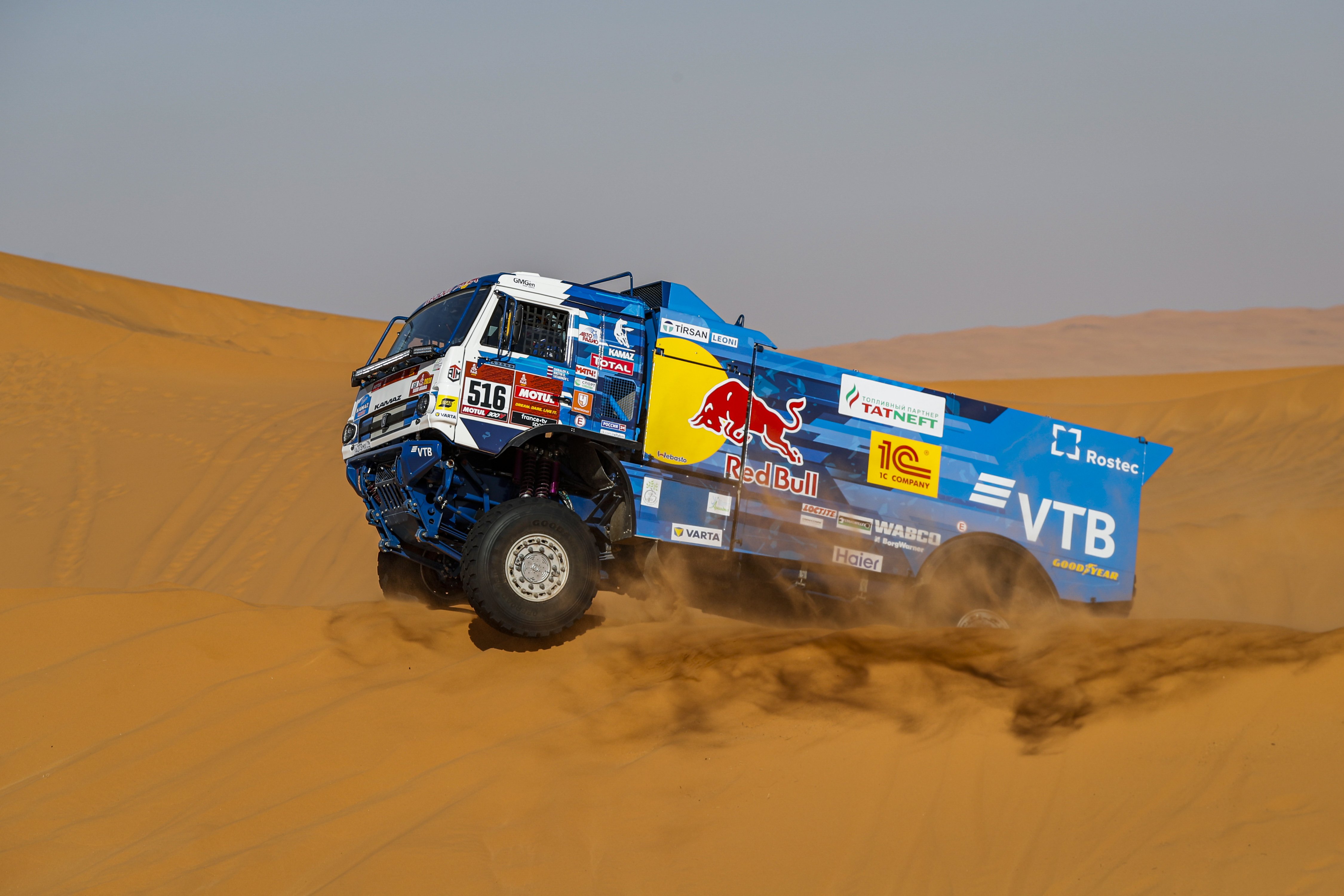 On Sunday, the rally caravan set off on a 741-km journey, which included the longest 546-kilometer special stage on the current Dakar. The way to the south-west laid through the Tuvayk mountain range to the southern border of the Najd plateau, where the racers were awaited by the bivouac in Wadi Al Dawasir. A landscape variety was a distinctive feature of the rally day. dunes and many kilometers of sandy areas stretched throughout the whole route, mixing with off-road sections. And numerous crossings only complicated the life of the navigators – they had to be alert every second in order not to get lost and not to go away from the course.

The good news for entire KAMAZ-master team was return of Eduard Nikolaev’s crew, who had withdrawn on the sixth stage due to technical problems. On Saturday evening, the organizers of the competition approved the application of the Russians to return to the race, and the mechanics managed to prepare the truck No 500 for entering the track.

We want to mention that recently in the Dakar regulations there has been a change regarding the abandoned contestants. Now each of them can seize the so-called Joker, that is continue their performance, but in a separate rating from the overall classification. This opportunity is given to a contestant or a team only once for the whole Dakar. Thus, Nikolaev became a member of a separate classification Dakar Experience.

An interesting fact: the overall leader among trucks Andrey Karginov, after six stages showed the ninth best time in the absolute (cars and trucks) of the general classification, his teammate Anton Shibalov was the tenth. Both Russian crews left for the start of today's special stage after twenty cars, which, considering the fast stage, gave them a certain advantage.

The best according to the results of the sports day was Andrey Karginov, driving 546 km in 5 hours 1 minute 2 seconds. At each time point crew No 511 showed the best result and won their third stage on the Dakar 2020. 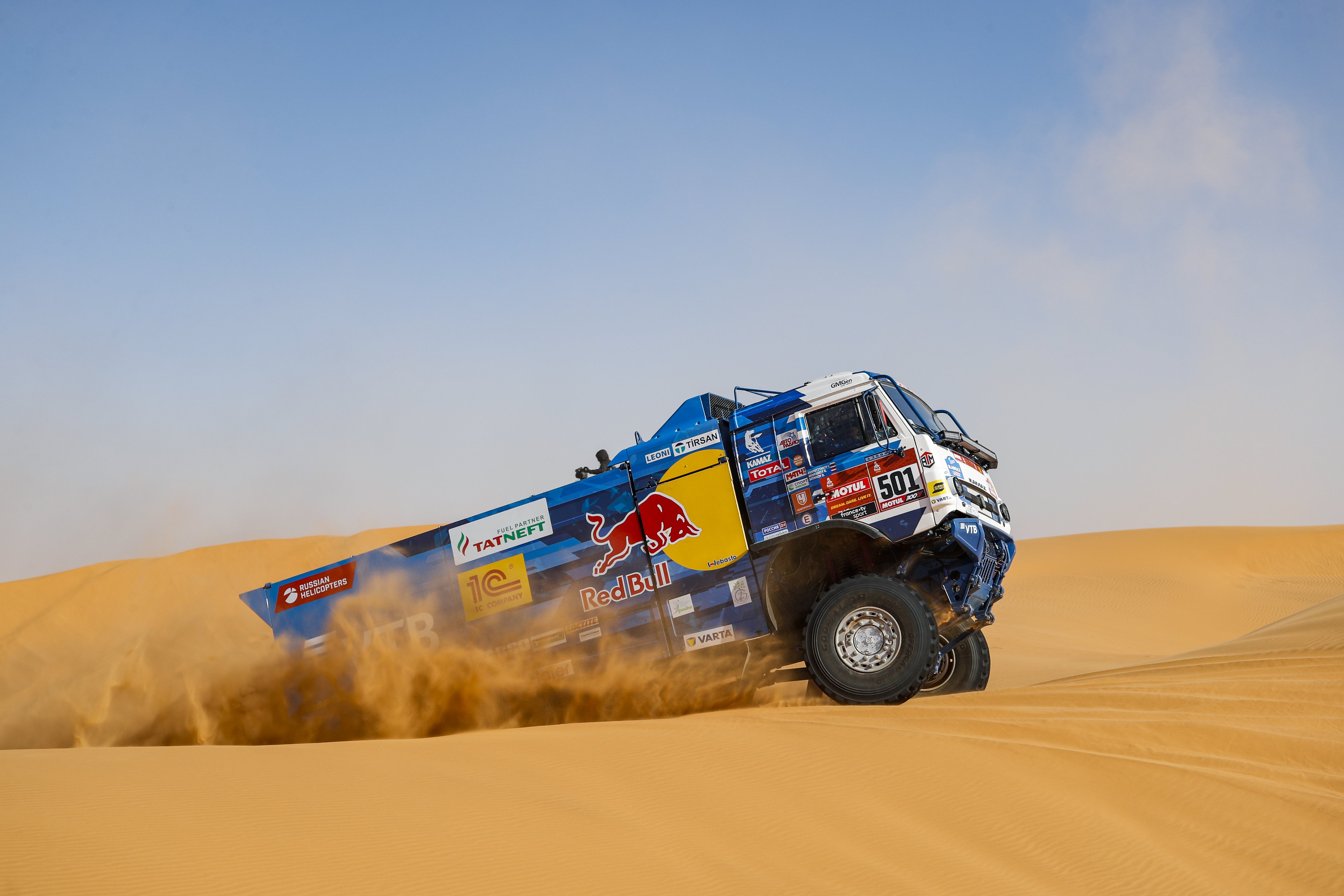 Andrey Karginov, driver of crew No 511: “The special stage was very fast, we drove at maximum speed all day. Today there were not many dunes, and those that we met were not very big.”

Andrey Mokeev, co-driver of crew No 511: “There were places where you could go away from the course. There were very long references at 10, 12, 14 km. There were a lot of roads on solid and sandy plateaus. There was not so many sand, we crossed more sand ridges. And so it alternated all day. But there were more fast sections. As for overtaking, we did not see anyone in front of us."

The day turned out to be successful for Dmitry Sotnikov as well. On the distance he showed a high pace, which quickly allowed him to overtake the Dutch Janus van Kasteren and the Belarusian Siarhei Viazovich. At the finish Sotnikov lost only 3 seconds to Karginov.

Dmitry Sotnikov, driver of crew No 501: “Everything went well, we overtook Van Kasteren and Viazovich, drove up to Shibalov and drove more than half of the special stage behind him. The task was to insure the two leading KAMAZ trucks, which we managed to do, and we brought the truck with a good result The stage was long, the average speed was 110 kmh. I would say that it turned out a bit boring. Today we passed more prominent and higher dunes, as I understand, every day we come closer to the toughest sands." 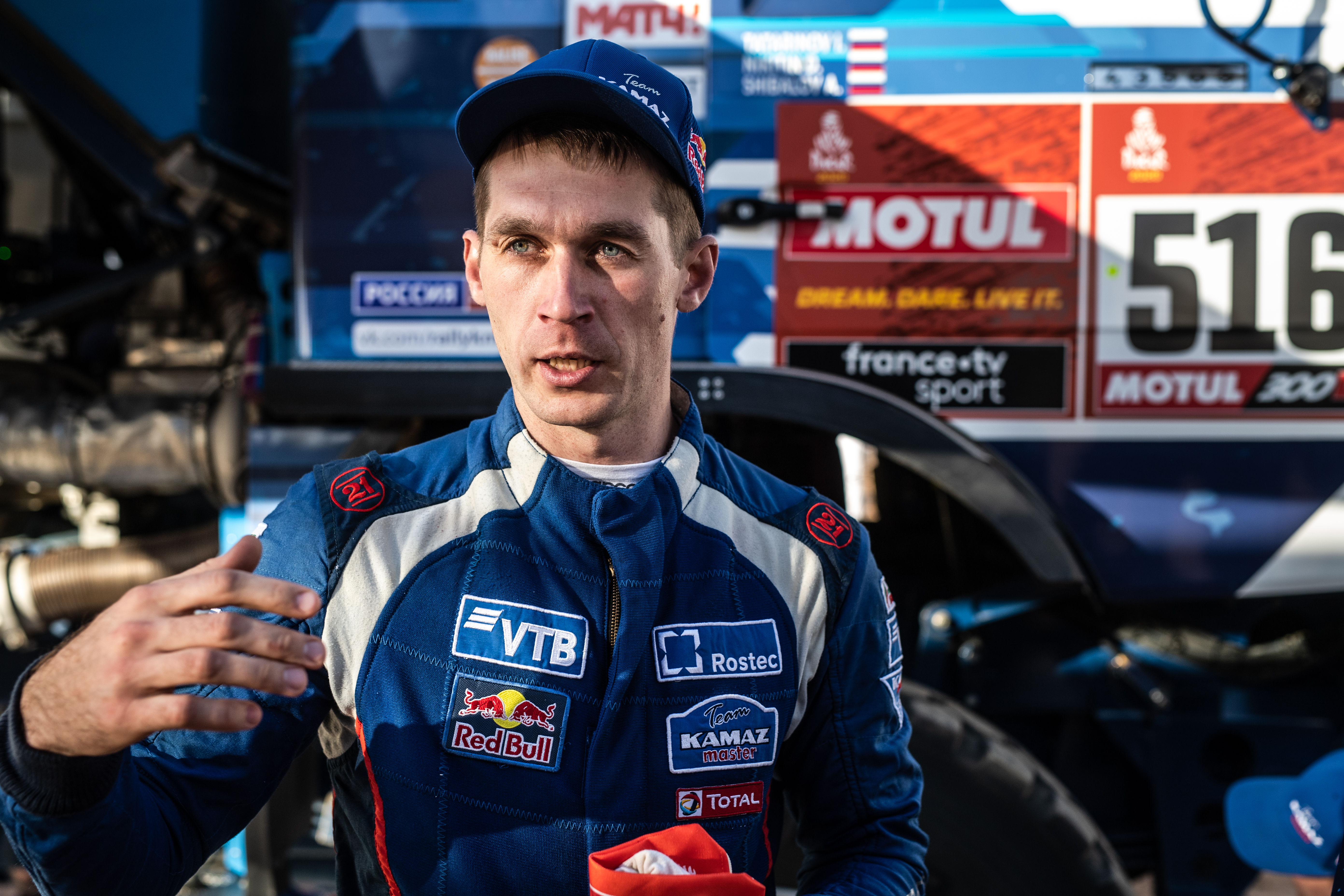 Anton Shibalov has the third best result in the protocol of the seventh stage (+2:05). Just four minutes behind him is the Czech Ales Loprais. The result of the Dutch Victor Versteijnen from Gerard de Rooy’s team looks curious: seventh place and 12 odd minutes behind Karginov. The crew left the Dakar after the third stage, but continues to perform as a member of the Dakar Experience. Eduard Nikolaev showed the fourth result most of the distance, and on the last control point he lost 5 minutes to Karginov. In the final protocol, the time of the Russian does not seem understandable - 8 hours 58 minutes 58 seconds. At the time of writing the release, no clarifications have been received from the judges.

Anton Shibalov, driver of crew No 516: “Today was a very fast day. Despite the long distance, we passed it very fast. There were no problems, interesting special stage. We’regoingfurther.” 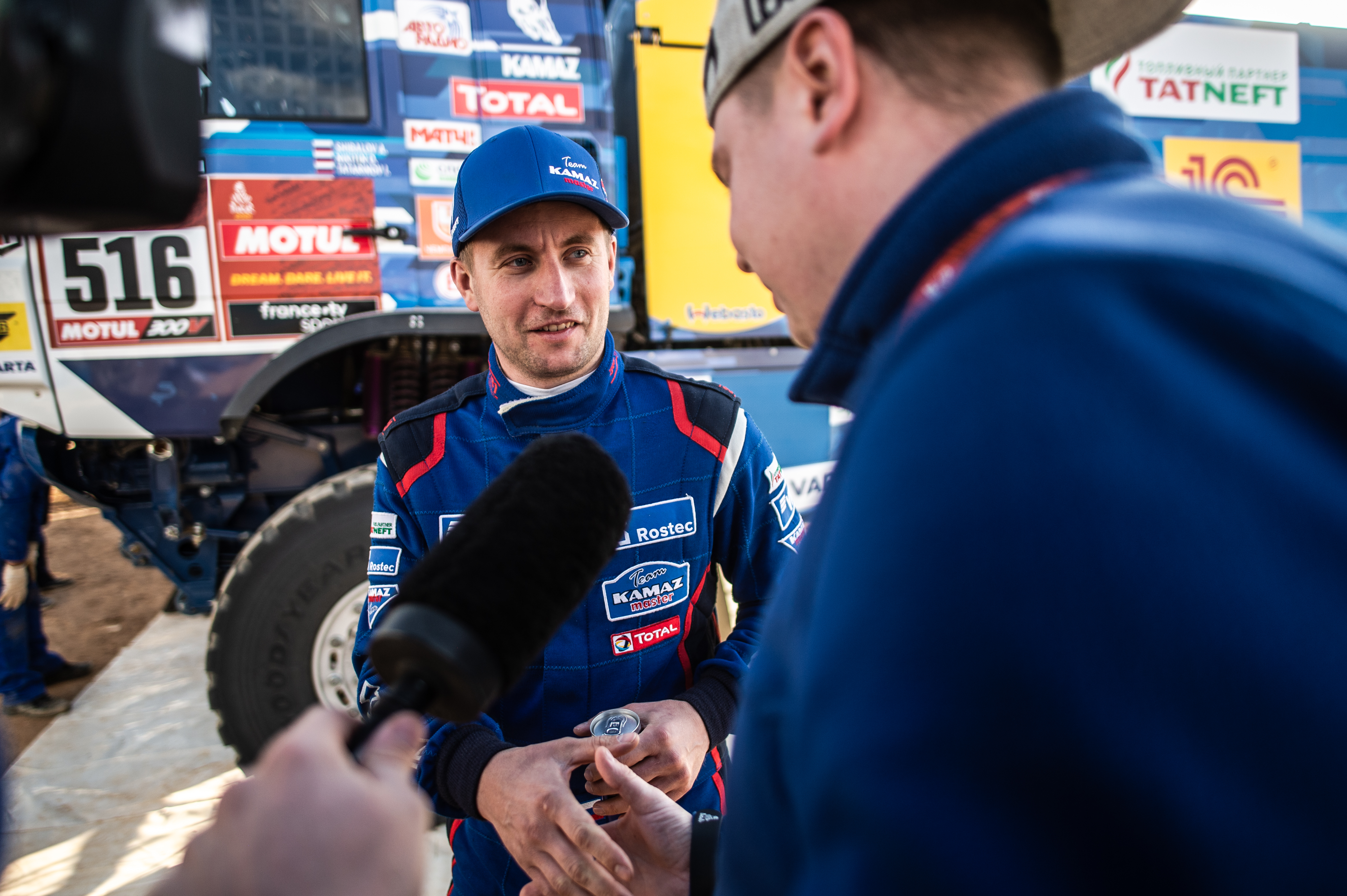 There are no serious shifts in the general classification. Karginov’s crew increased their advantage over Shibalov and Viazovich to 21 and 46 minutes respectively. Loprais is ahead of going fifth Macik by 24 minutes. Sotnikov climbed to sixth place, and the Japanese Teruhito Sugawara entered top 10.

It is deeply regrettable that the start of the second half of 42nd Dakar edition was darkened by the death of the Portuguese biker Paulo Gonçalves. The tragedy occurred on 276th km of the special stage. Arrived doctors found the driver unconscious. After resuscitation, he was taken to the hospital by helicopter, where doctors stated death of the 40-year-old rider. KAMAZ-master team expresses sincere condolences to the relatives and friends of Paulo ...

On Monday, contestants of the Dakar 2020 will have to travel along the route of the eighth stage of Wadi Al Dawasir - Wadi Al Dawasir. Its length will be 713 km, 474 of which will be special. The loop stage is an opportunity to go south, where mountainious landscapes, canyons, dune fields and a fast 40-kilometer straight section await the athletes. 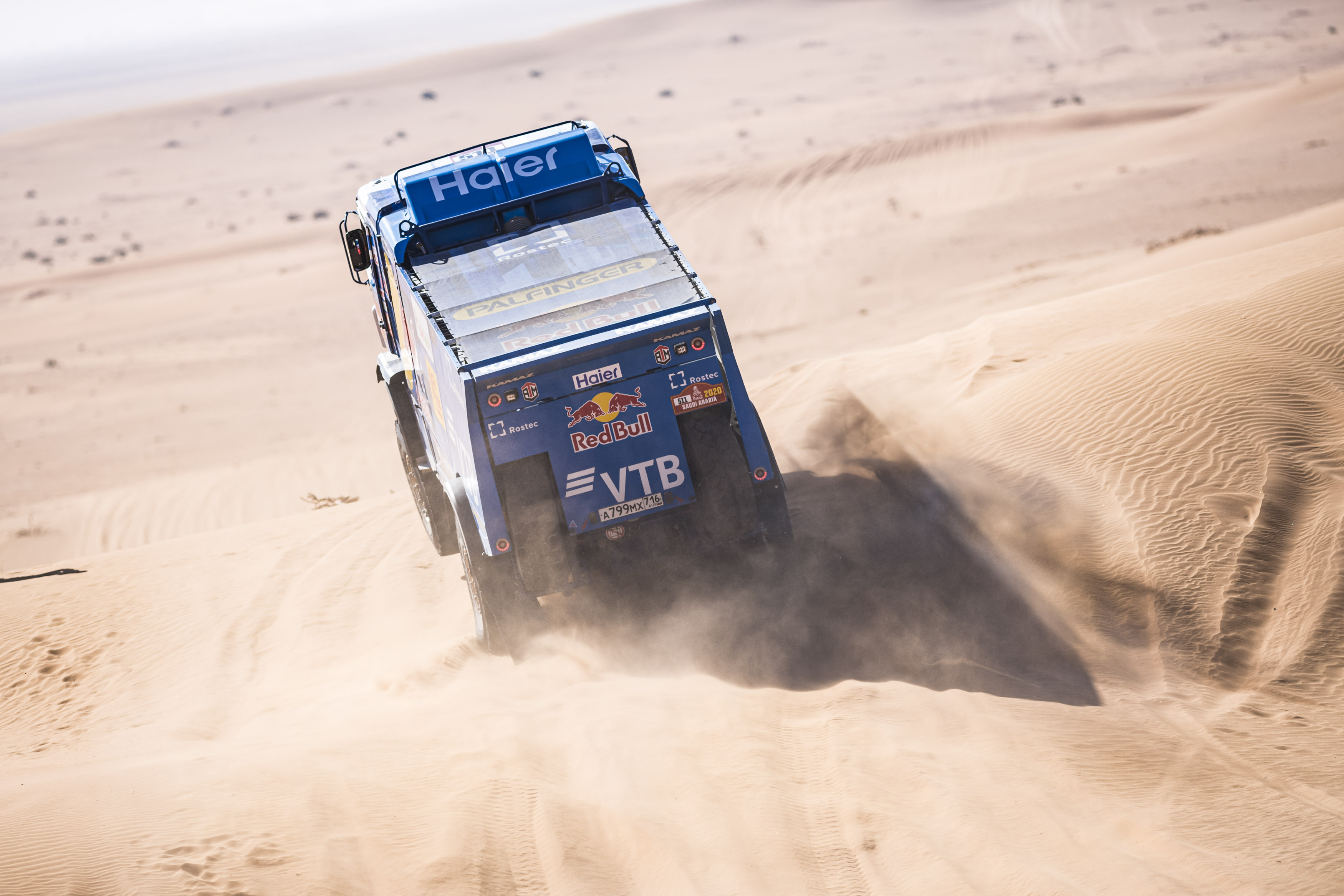