The soon end of the 44th edition of the Dakar Rally is felt all the time, but experienced racers know it's too early to relax. Despite the fact that two-thirds of the competition is left behind, the key events of the January race are still ahead.

After almost three thousand kilometers of special stages in the truck classification, the first and second places are separated by only 11 and a half minutes. And any accident, like a puncture of a wheel, can wipe out them. The advantage over the fourth line in the standings does not look solid even for an hour and a half. The same dense results in other categories. History knows many cases when the favorites left the race at the most crucial moment. The Dakar 2022 ended ahead of schedule for one of the leaders of their categories Daniel Sanders and Ross Branch (moto), Manuel Anduhar and Aleksander Maksimov (quad), and a number of titled riders faced technical difficulties and continue to compete without the opportunity to battle for the main prize.

The terrain of the ninth Dakar stage (a loop route in the vicinity of Wadi ad-Dawasir) was divided into three categories: 53% sand, 33% gravel and 14% dunes. A guarantee that at 287 kilometers of the special stage it will not be easy for anyone. The first half of the distance was laid on a wide plateau and led the rally caravan along sandy parallel tracks, leading the race participants into valleys and canyons with small narrow passages. At the evening briefing the crews were paid particular attention to heavy-going places for the largest vehicles in the Dakar. In order to get past these areas without damage, drivers had to adjust the vehicle position to centimeters. Large boulders, often lying in the middle of the road, had to be driven into the wheels so as not to let them under the bottom and not to damage axles and suspension parts. 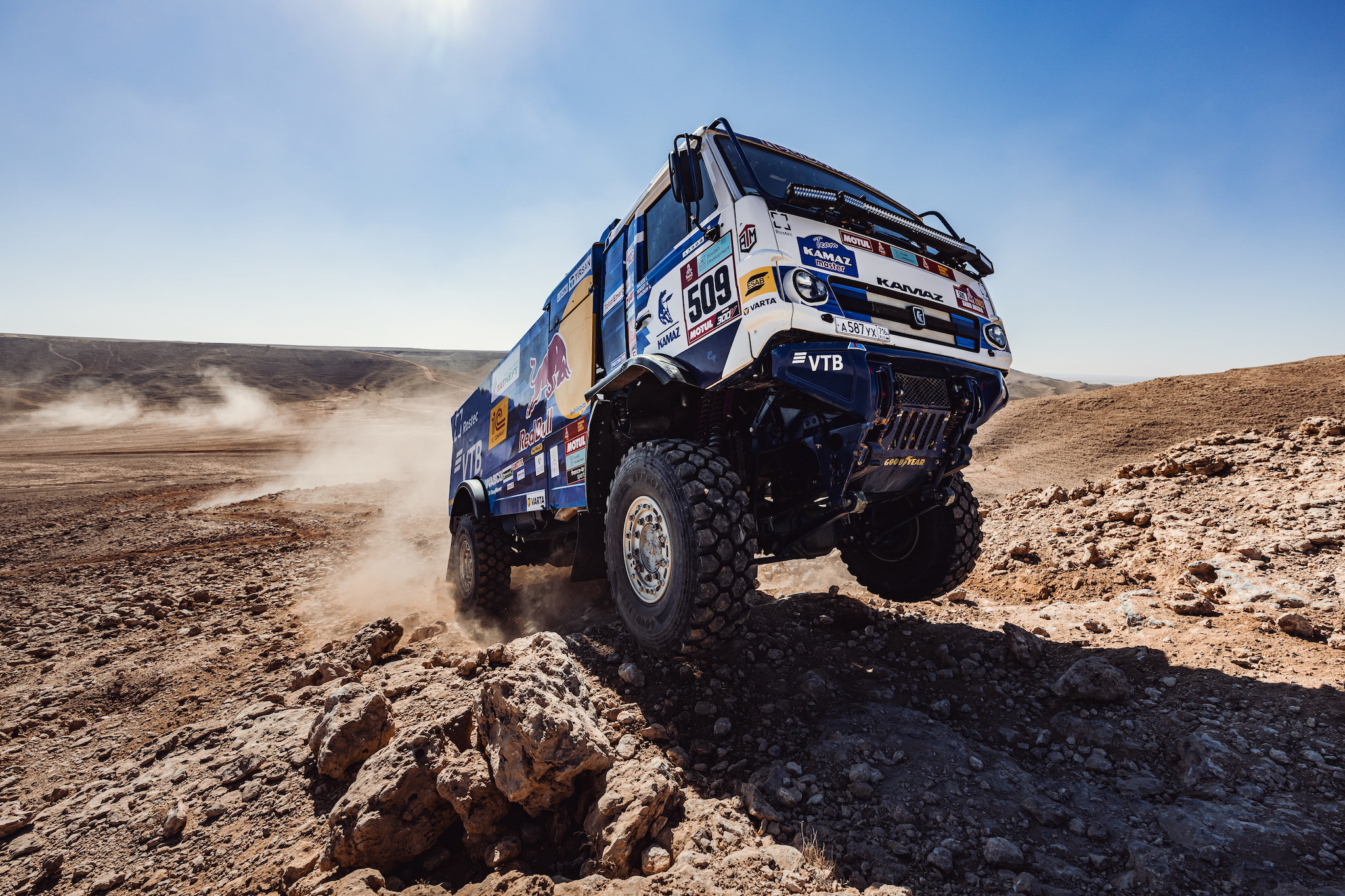 The first serious dunes appeared only after 140 kilometers of travel and almost immediately gave way to a 50-kilometer stretch with difficult navigation between numerous dried-up river beds and valleys. For the second time, they had to test themselves in difficult dunes in the interval of 200-220 km, after which they could accelerate on a fast sandy track in valleys. An additional difficulty for the crews was added by the strong wind, which in some places did not leave the slightest trace of the road, giving the navigators the opportunity to approve themselves.

It was not possible to predict the winner of the stage until the very finish, as the position of the crews at the time intervals changed with enviable constancy. Closer to the middle of the distance Andrey Karginov had to stop. At that time, the leader of the race spent about five minutes to replace the punctured wheel, which immediately threw the Russian crew to the 13th place. Density among the trucks was the highest - at around 160 km, the first and 16th crews were separated by 10 minutes!

In the Dakar in 2021, the Czech driver Martin Macik from the Big Shock Racing team showed his best career result - three victories on special stages and the fourth place in the race. Such results, coupled with a reliable IVECO truck, made this crew one of the favorites of the current rally-marathon, but the Dakar 2022 did not work out from the first kilometers. To the credit of the athletes, they did not give up the fight. Confident movement on the track notwithstanding its coverage, allowed Macik to make swift attacks on the result of KAMAZ-master crews. At the finish, the Czech was on the podium: he lost 2 minutes 37 seconds to the winner Eduard Nikolaev (time 2 hours 38 minutes 43 seconds) and only 3 seconds to Dmitry Sotnikov, who became the second. 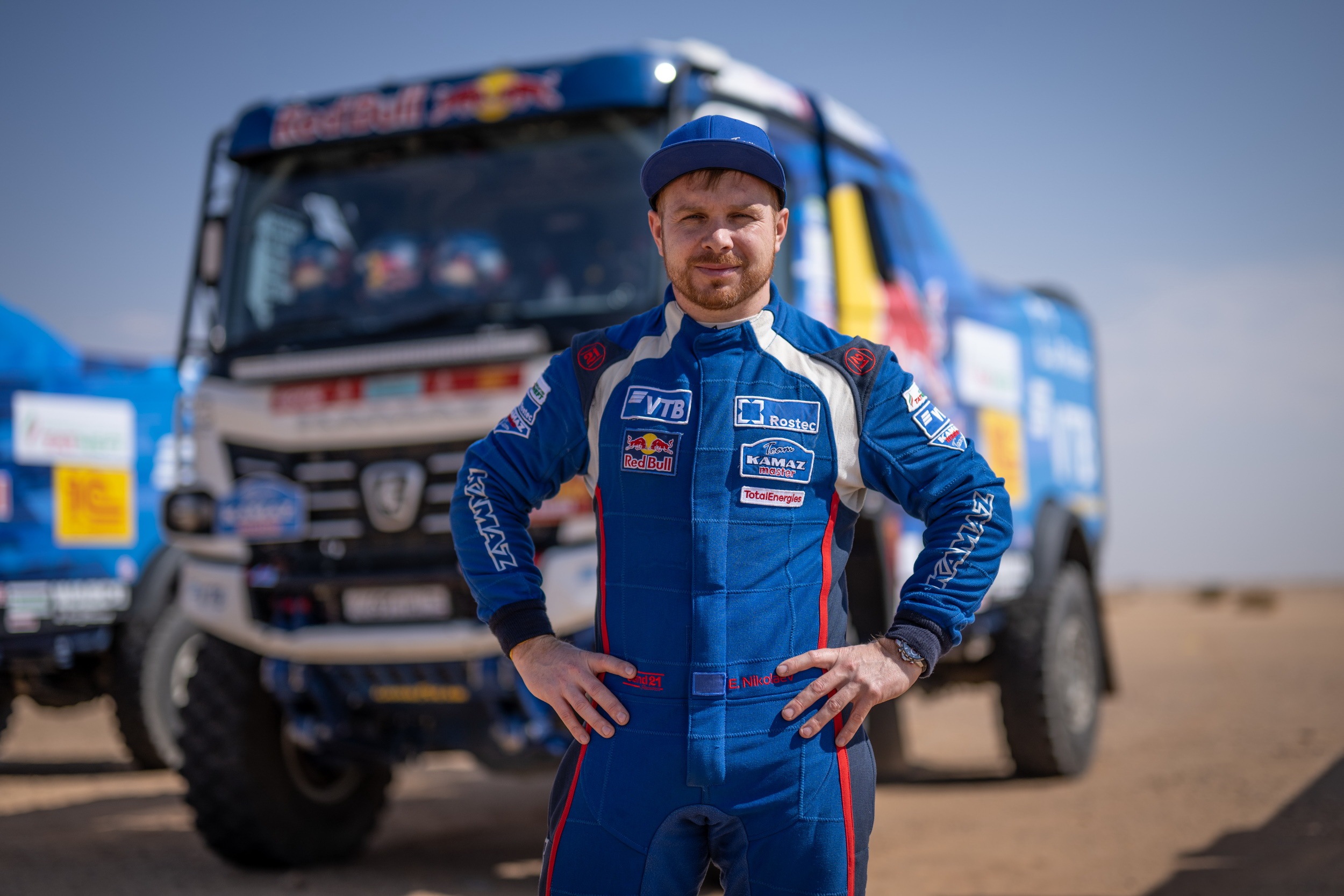 Eduard Nikolaev, driver of crew No 505: “It was a good special stage with stones and channels. The dunes were smaller than the day before, and they were simpler in complexity. Our crew did not have any problems - we coped with the navigation, the vehicles did not disappoint. Andrey Karginov, who changed the wheel, and Dmitry Sotnikov, who wasted time looking for a hidden point, were unlucky today." 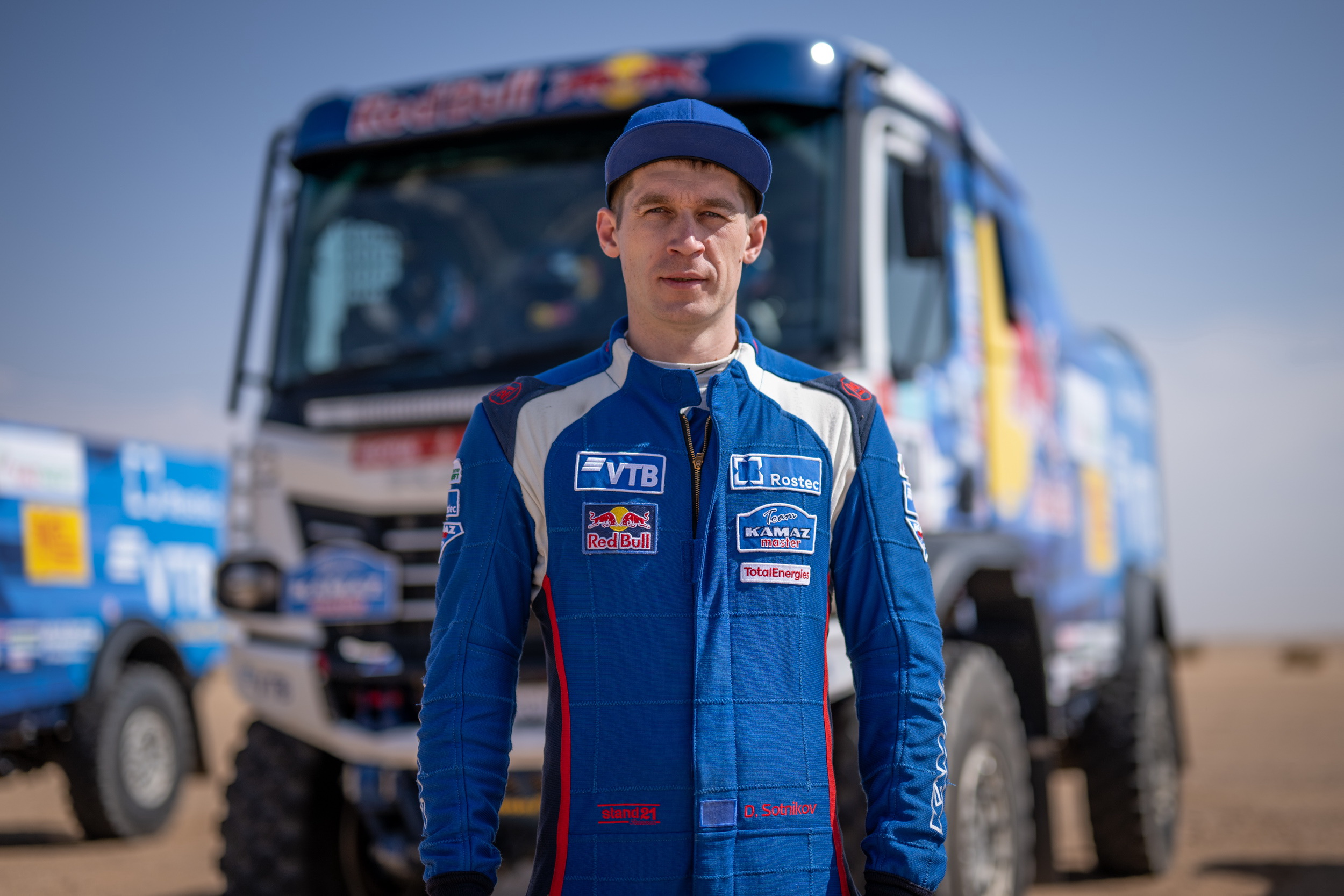 Dmitry Sotnikov, driver of crew No 500: “Today there was a rather fast rocky special stage. In the beginning, I made a slight mistake with the course and we had to make a loop to take a hidden control point. At that moment Andrey Karginov drove around us. Later we gave way to Eduard Nikolaev. Closer to the middle, we saw Karginov's crew changing the wheel. The road was very dusty, it was hard in the channels. Moreover, there were stones that were difficult to see in such conditions.”

A few minutes separated the other drivers from getting into the top 3: Anton Shibalov finished fourth, followed by Ignacio Casale and Ales Loprais. The nephew of the legendary Karel Loprais could get ahead of Andrey Karginov and increase the lead in the general classification over the two-time Dakar champion to 15 minutes. 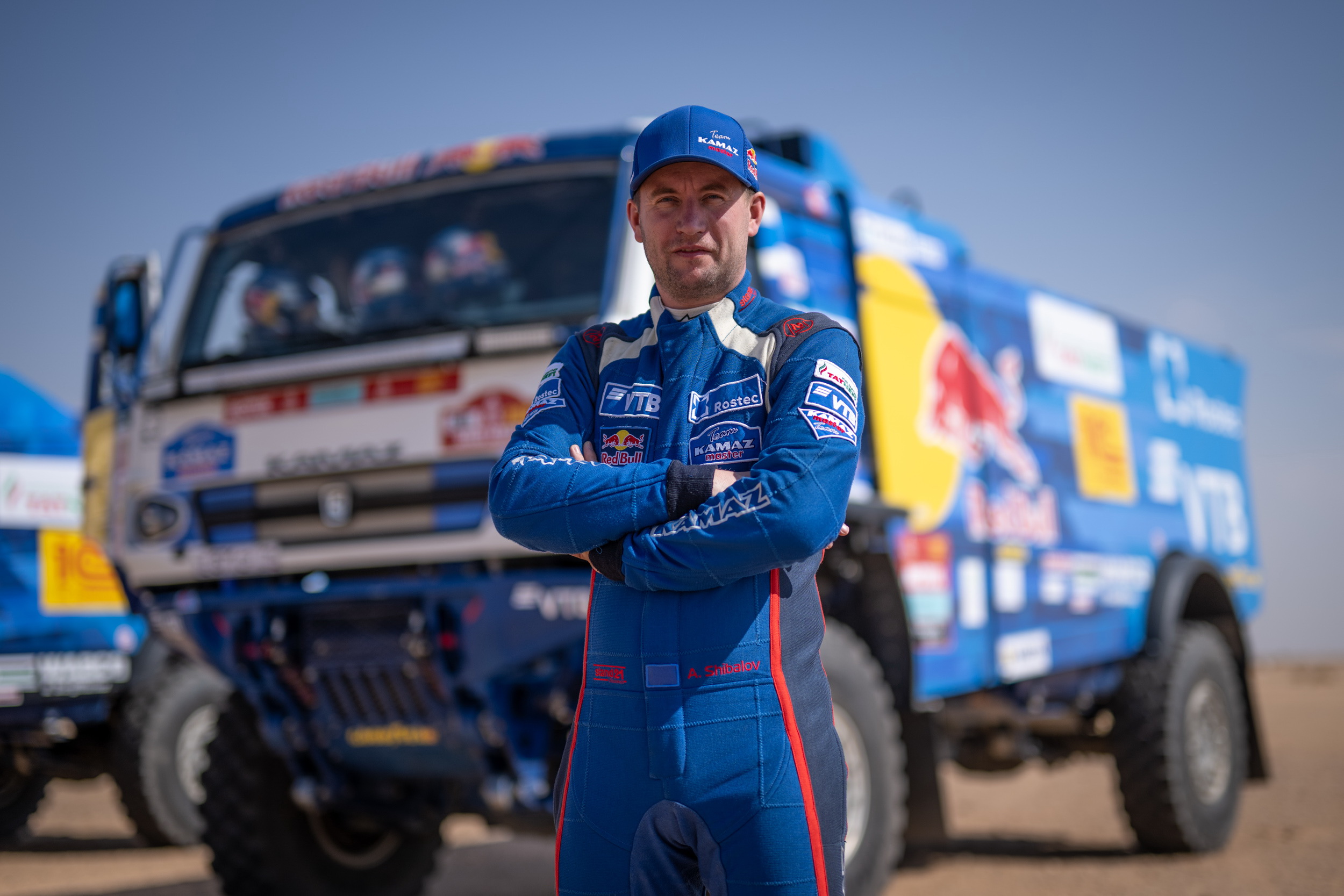 Anton Shibalov, driver of crew No 501: “I can't really single out anything on the track - paths, channels, canyons, sands, various dunes. At the very beginning, we did not take a point. I had to circle. We let Janus van Kasteren come close to us, who was keeping behind us throughout the special stage. In the first part, there were small problems with the truck - the front right shock absorbers were out of order, which affected our pace. I don't think we lost much. But it was uncomfortable to drive, I constantly thought that something was wrong with the truck."

Janus van Kasteren will not definitely want remember beautiful landscapes that the racers glanced at. 80 kilometers before the finish line, the Dutchman was less than a minute behind the leader, but the forced 15-minute stay in the dunes deprived him of his chances to win - only the 15th result of the day. Many other crews also had to retard in the sands. The scene with participation of five trucks and several off-road vehicles at once became spectacular for the viewers. In a deep crater, surrounded by high dunes, one of the participants in the truck category was lying on its side, while cars were trying to dig out of the soft sands.

It is also worth noting stability of Gert Huzink, who has been applying his hybrid truck to Saudi Arabian off-road for the third year in a row. Only a few years ago it was impossible to imagine participation in the rally-marathon of trucks on power units alternative to the internal combustion engine. But the ambitious program “The Future of Dakar”, which was presented last year, is rapidly implemented. On the Dakar 2022 there are already five hybrid vehicles with low carbon dioxide emissions and one fueled by biofuels in the Dakar. 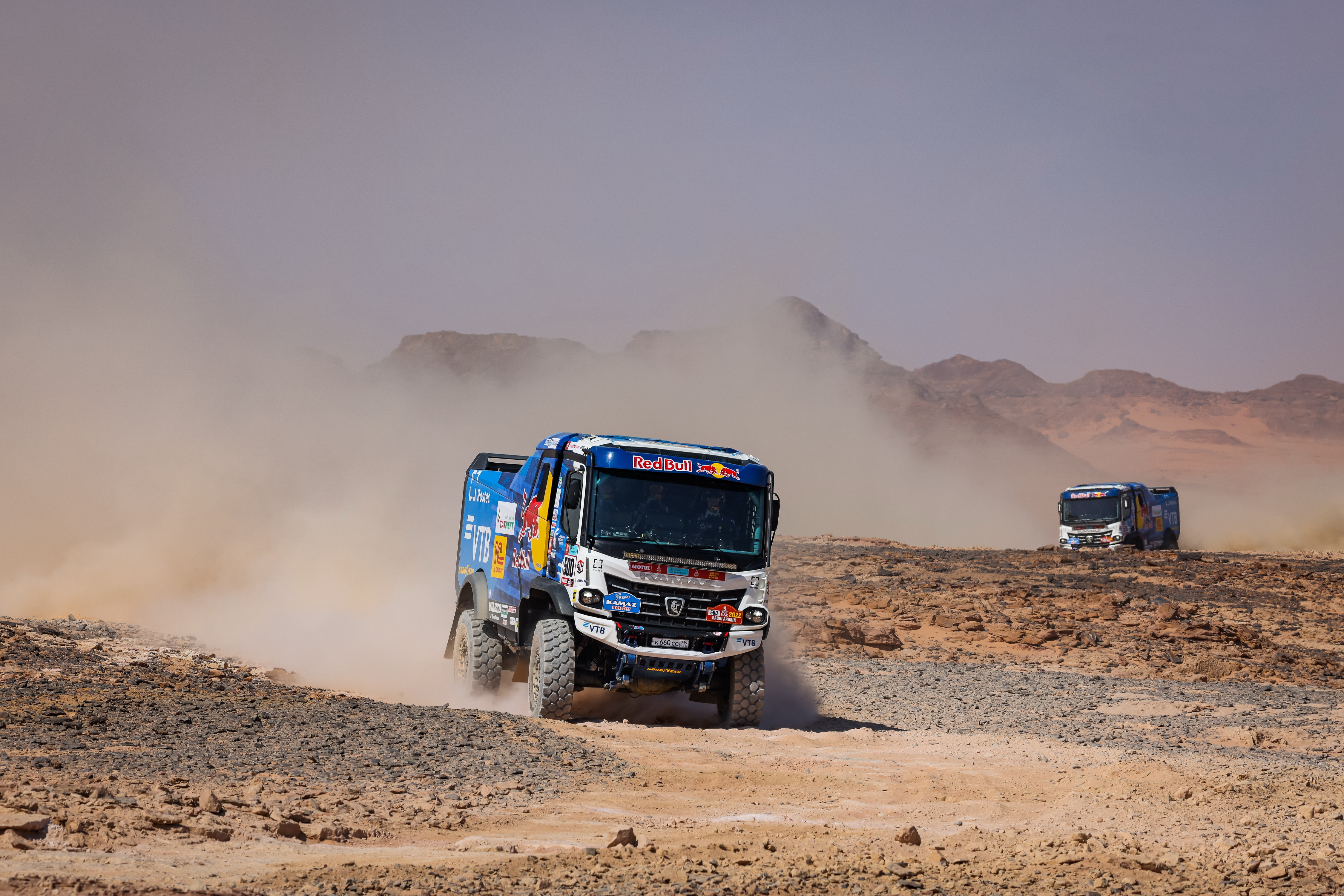 Three prototypes of the Audi RS Q e-tron, for which a separate T1-U category has been created, have already proven their worth in this race - the hybrid car, combining gasoline and electric engines, has been among the top three prize-winners eight times at the stages, including victory in two stages. The star team composition consisted of 14-time Dakar winner Stephane Peteransel, three-time Golden Bedouin winner and two-time world rally champion Carlos Sainz and two-time champion of the prestigious DTM series Mattias Ekström.

In the truck category, the pioneer in 2020 became Gert Huzink with his hybrid Renault. The Riwald Dakar Team plans to create an all-electric sports truck. Also this winter Teruhito Sugawara made his debut on the Arabian Peninsula on a new generation truck, his Hino is equipped with diesel and electric engines. Revolutionary for rally-raids became the appearance of the hydrogen truck H2 Racing Truck of the French team Gaussin. So far, the novelty is being tested in Saudi Arabia, but the plans are ambitious - full participation in the Dakar 2023.

Green technologies are well known to the KAMAZ-master team. The development of a gas-and-diesel truck began 10 years ago, and already in 2014 it started to participate in various world-class competitions, achieving high results. The next step is to create a truck with a hybrid engine for the Dakar. 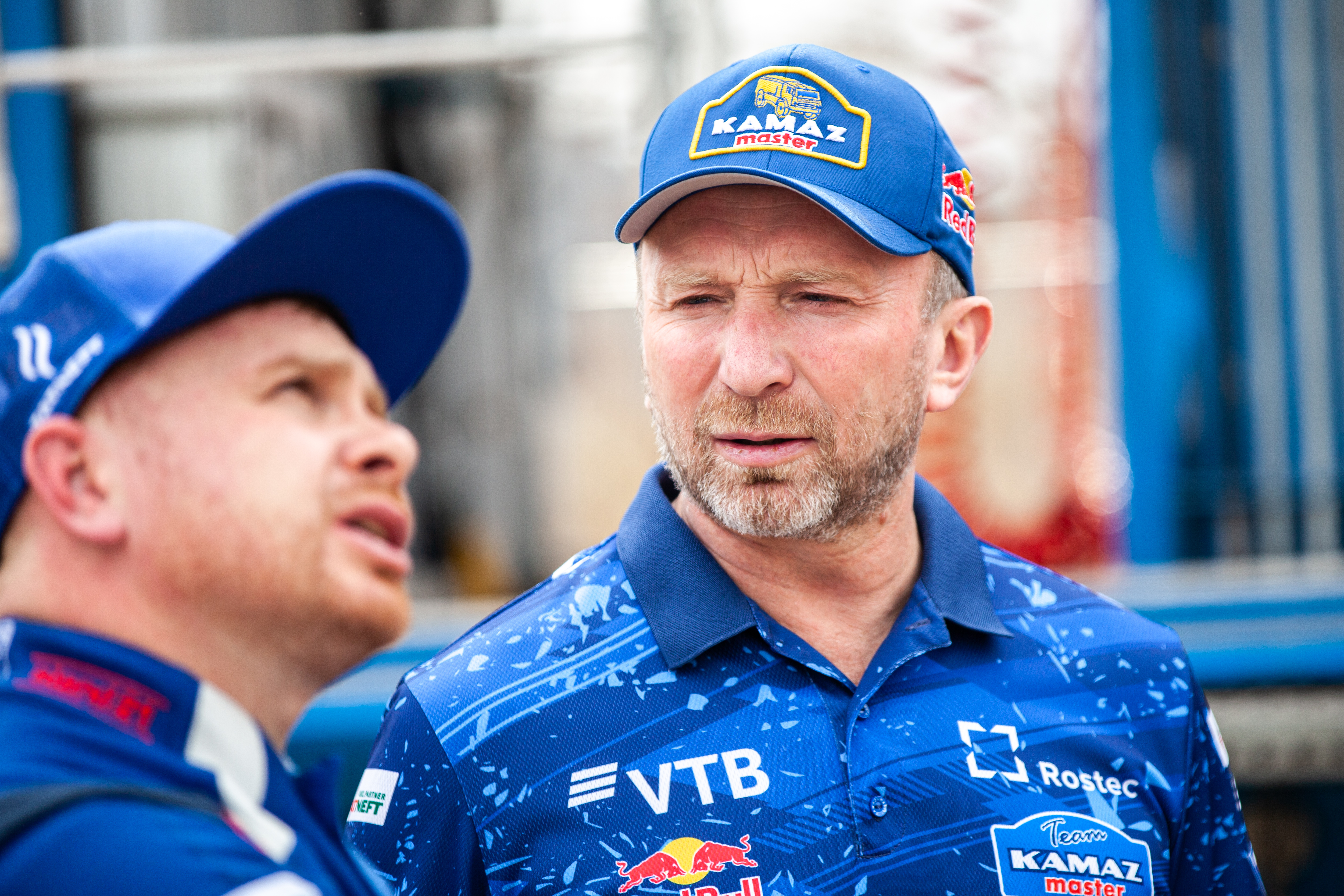 Vladimir Chagin, head of KAMAZ-master team: “The International and Russian Automobile Federations are actively working in this direction, encouraging us. The general director of the plant, Sergey Anatolyevich Kogogin, approved a five-year development program. On the first stage it is creation of a hybrid sports KAMAZ, where an internal combustion engine will be combined with an electric power plant. Power from the generator and battery will supply the electric engines for the front and rear axles. Thus, the electric transmission and control system will be worked out. The second stage is implementation of hydrogen fuel cells, that is, we will replace the biodiesel power unit with a hydrogen one.”

According to the roadmap, the Dakar organizers will encourage participants to use biofuels from 2023, and from 2030, participation in the race will be limited to low-emission cars and trucks. Director of the rally-marathon David Caster, in turn, noted that this new era corresponds to the spirit of the times and will allow the sport to develop more environmentally.

In the meantime, the rally caravan on Wednesday will head to the west of Saudi Arabia - the tenth special stage Wadi ad-Dawasir - Bisha will be 375 kilometers, and together with liaisons, the distance of the sports day will increase to impressive 759 kilometers. 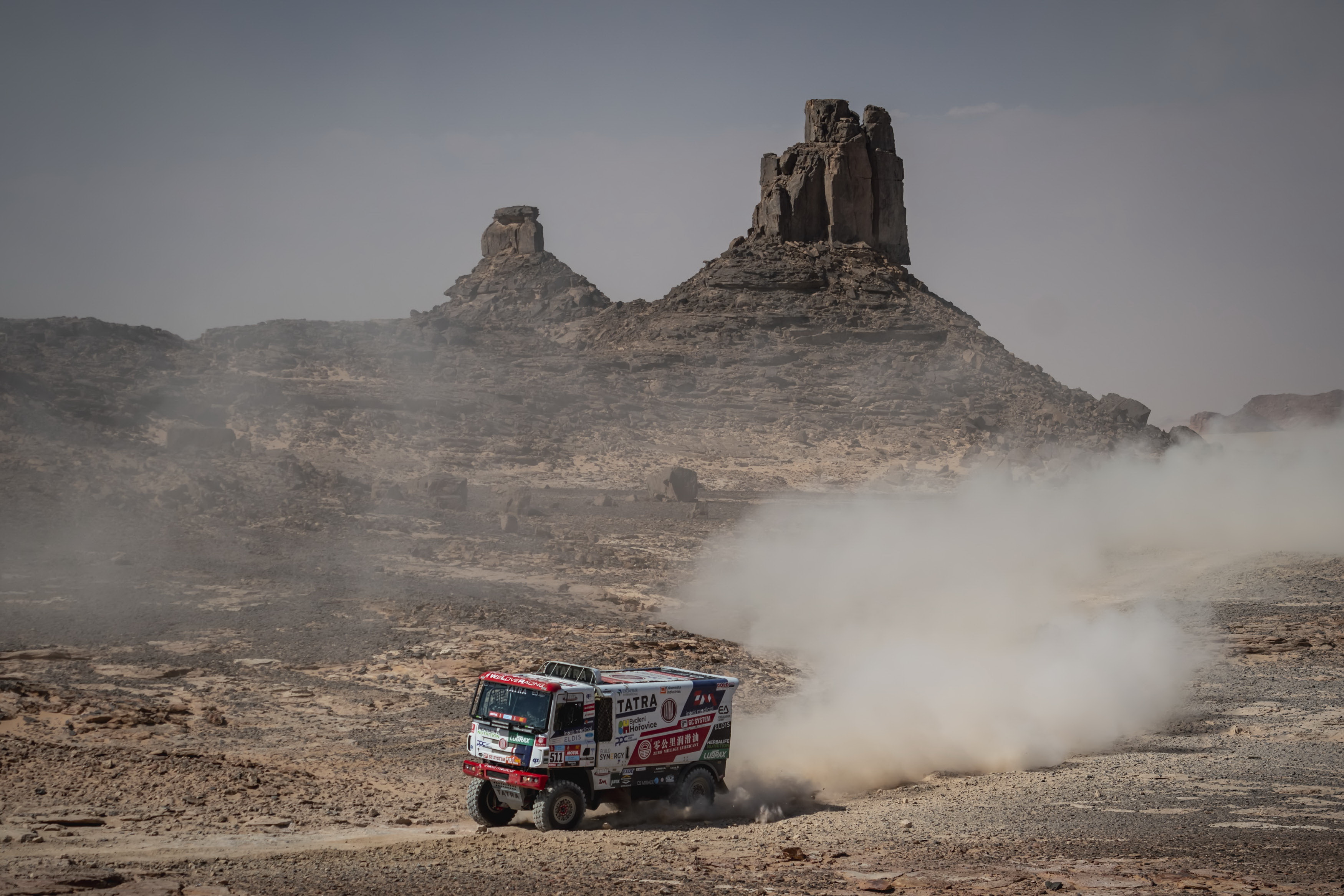 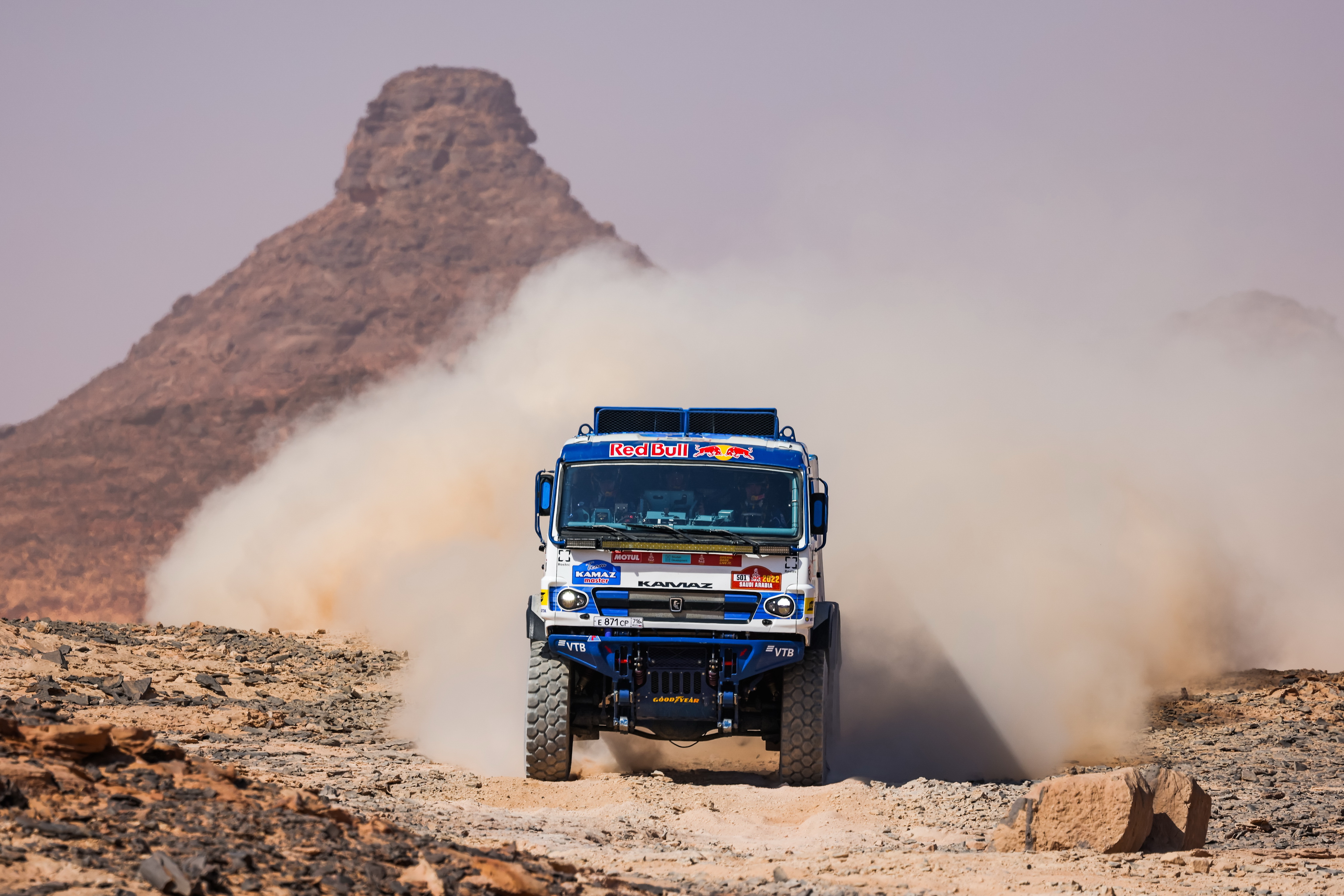