Marathon poker by KAMAZ-master on the Dakar Rally 2020

The eleventh stage of the international Dakar Rally 2020 in Saudi Arabia took place along the route Shubaytah - Haradh on Thursday, January 16.

The main motorsport adventure of 2020 under the name of Dakar is rapidly getting to its end. Only two days are left before the finish in Qiddiya, but the struggle for victory in the rally marathon is still not over. A significant time gap in the standings table should not deceive - the results will be summed up only after arrival of sports vehicles in the closed park of the race on Friday.

The shortened first stage of the two-day marathon upset many athletes: they still could not test for 100% their strength and skill in the impassable sands and dunes of the Rub’ al Khali Desert. On the other hand, the decision to halt special stage No 10 due to weather conditions was beneficial for the leaders in their categories. Who knows what could have happened in the majestic dunes of the southern part of the Arabian Peninsula, and what the situation in the standings would look like before today, if one of the contestants had remained in the middle of one of the largest deserts of the planet. 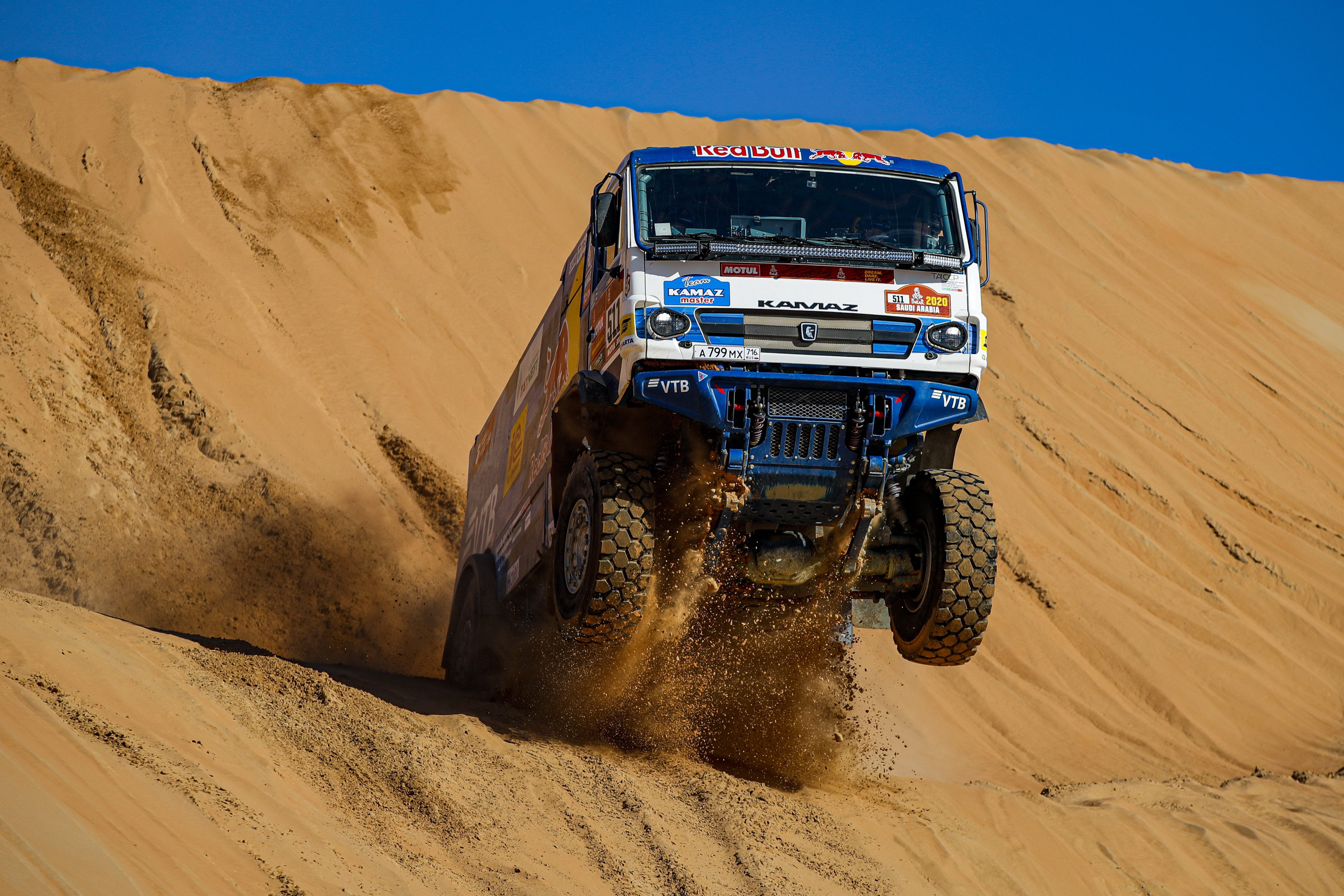 Arriving safely on the bivouac in Shubaytah (just 20 kilometers from the border with the UAE) on Wednesday, crews of KAMAZ-master team inspected their trucks carefully, and, not finding any damage, went to rest before the second part of the marathon. At the start of the stage, which consisted of sand and dunes for 90% and was occasionally mixed with soil areas, athletes should go totally concentrated on the upcoming route. Mistakes due to fatigue at the key stage of the competition are excluded.

Already at 6:25 a.m. bike riders set off for 379-kilometer route, start for cars was given in an hour and a half. The beginning of the day for the truck category was early as well - the countdown for Anton Shibalov began at 8:51. The last of KAMAZ trucks, 8 minutes after crew No 516, started the leader of the general classification, Andrey Karginov. Following the team tactics (to back up each other), Eduard Nikolaev, who had stopped, was waiting for him on the track.

The beginning of the eleventh stage was a real challenge for the rally caravan: first 80 km of the route consisted of dunes, the height of which in this region of Saudi Arabia could reach 250 meters. Thanks to the weather for being favorable to the Dakar residents this day: becalmed strong wind did not notice treads in the sand, keeping them as a guide for contestants behind. This made it possible to storm the dunes more confidently, but did not mean that it would be easier to overtake them. Number of those, who faced difficulties in overcoming natural obstacles, was estimated in dozens in all categories. 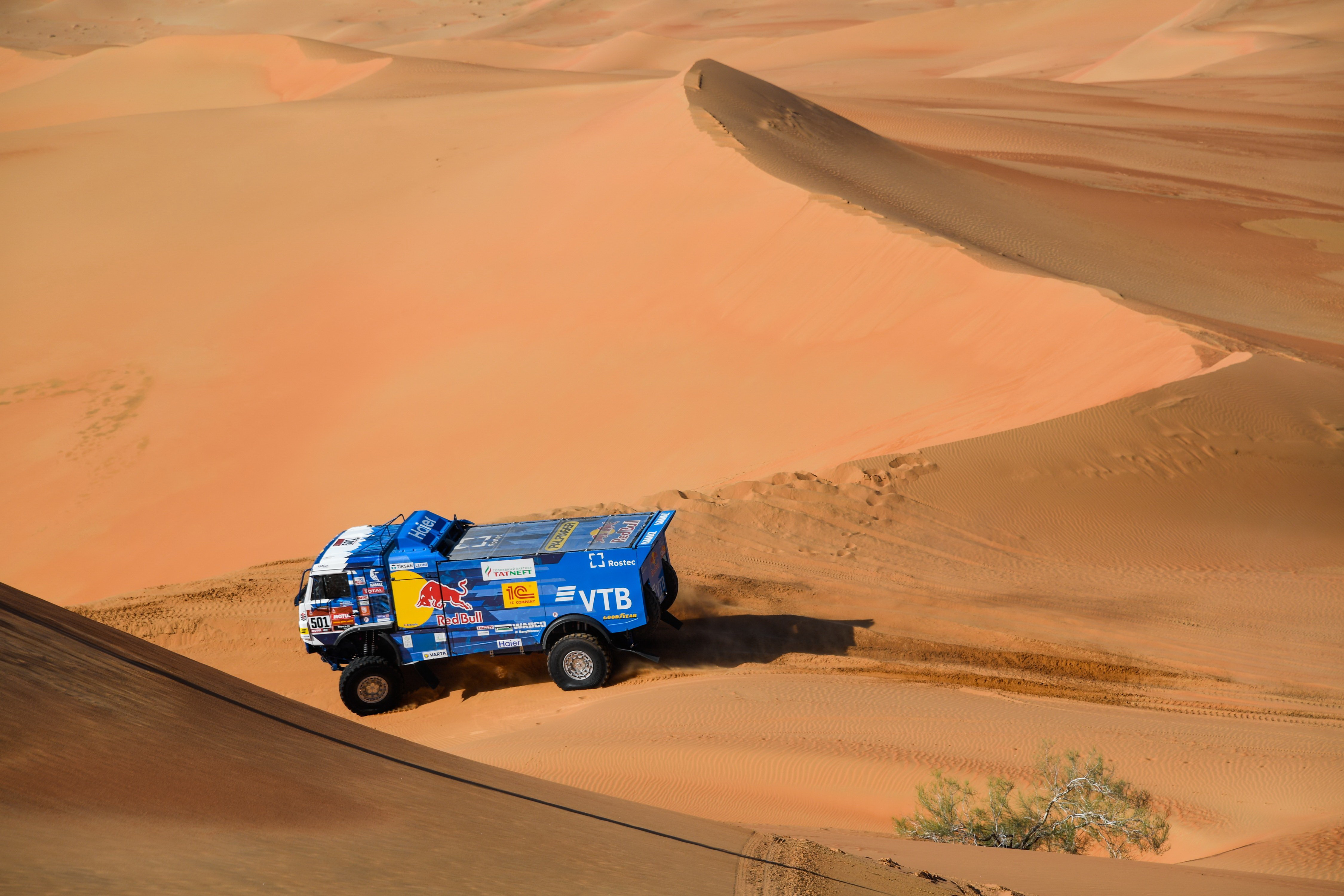 For example, the Czech Ales Loprais got stuck between 108 and 162 km and lost about 20 minutes. Later he spent about two more hours to solve problems, which costed him the fourth position in the truck overall. Siarhei Viazovich, who is on the third position, could not impose a fight to KAMAZ as well: on the eve he encountered a breakdown (a break of the air injection tube in the left front wheel, one leaf on each rear spring of the truck was also broken). In the bivouac in Shubaytah, one MAZ of his teammates became a donor for the bonnet truck.

The best at the finish line in the area of ​​large solonchaks Sabkhat-Matti was the crew of Andrey Karginov. For him this victory was the sixth on the Dakar 2020. Dmitry Sotnikov lost a minute and a half. Anton Shibalov showed the third time of the day (+3:25), Eduard Nikolaev closed the four (+4:18). All Russian crews passed the route in a tight group in direct visibility of each other. Siarhei Viazovich was the fifth, 12 minutes behind. Confidently drove the distance Martin Macik, becoming the sixth. Gert Huzink on the last 200 km slowed down and was the eighth to complete the special. The second day in a row Patrice Garrouste got into top 7.

The final start of the race is waiting for contestants on the Dakar 2020 on Friday: the distance of the twelfth stage along the route Haradh-Qiddiya will be 447 km, 374 of which will be held as a special stage. The rally caravan will travel west of Saudi Arabia and will finish 40 km from the kingdom’s capital of Riyadh. 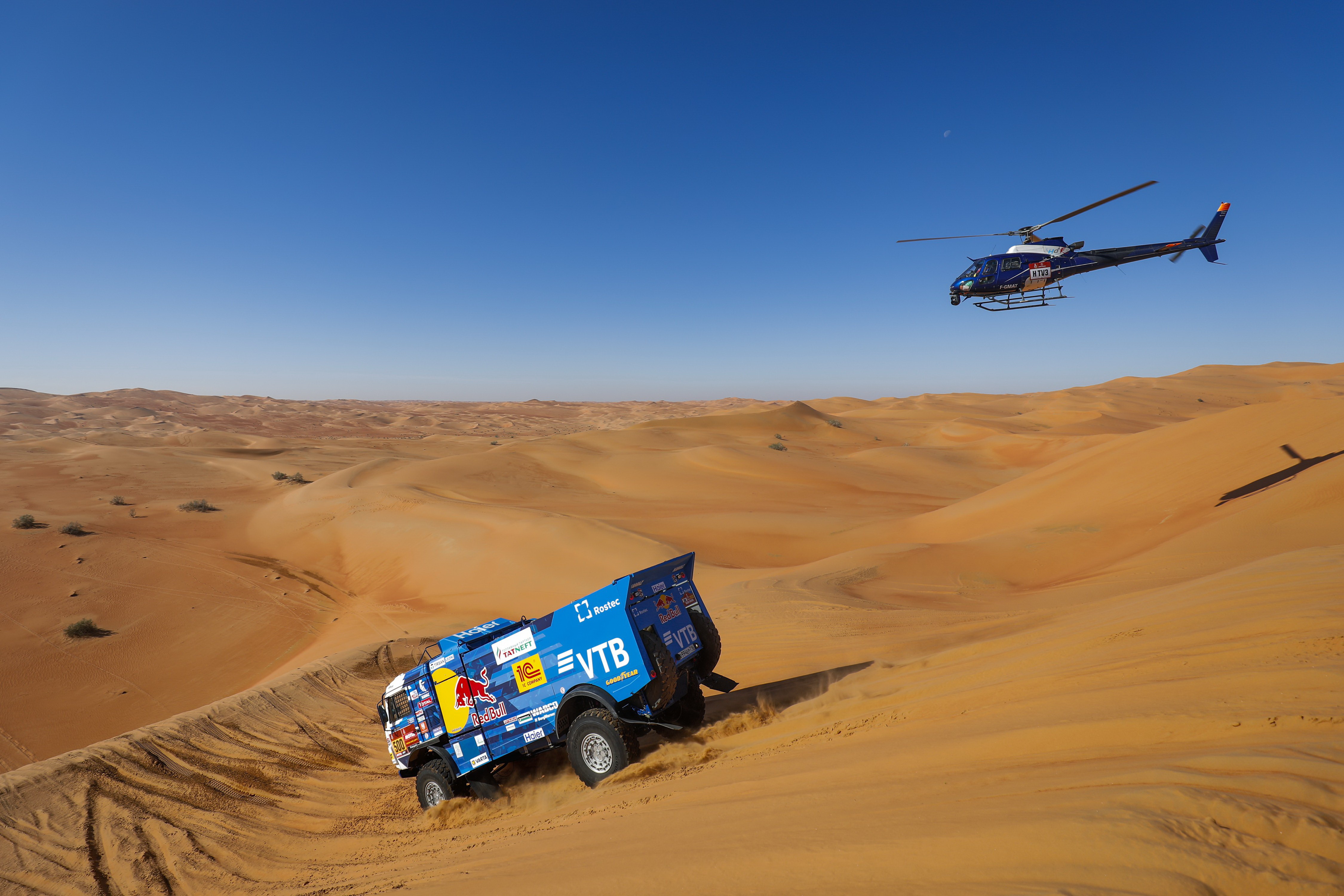