Karginov won the third stage of the Rally Dakar 2020

The third stage of the international Dakar Rally 2020 in Saudi Arabia took place along the route Neom - Neom on Tuesday, January 7.

On the Red Sea coast in the northwestern part of Saudi Arabia, soon will appear the city of the future - Neom. As follows from description of the project, which impresses not only with its futuristic ideas, but also with a grand investments of $ 500 billion, “Neom is a courageous and daring dream, this is a vision of what the New Future might look like. This is an attempt to do something that has never been done before, and this happens at the time when the world needs fresh thoughts and new solutions." The New Future is Neom.

For many decades Dakar is justly considered the main event in the rally-raid world. And its moving from far South America with its diverse landscapes to the deserted Arabian Peninsula fits perfectly into the concept of creating Neom - the future pearl on the Red Sea coast. And in the meantime hundreds of sportsmen from all over the world are trying to achieve their brave, bold dream: masters in the sands and off-road compete for the Golden Bedouin, beginners - for the opportunity to overcome the most difficult 7900 km and appear on the finish line, writing their names in the history of the race.

The toughest conditions of the rally-marathon are difficult to feel from a TV-picture or bright photographs. Mechanics of the teams spend almost all day and night at work for sports vehicles not to fail on the track, the crews give it physically and emotionally not even 100%, but all 300. Enormous pressure falls on everyone who crosses the boundaries of the bivouac. Such is the Dakar: one has to sacrifice a lot to conquer it. 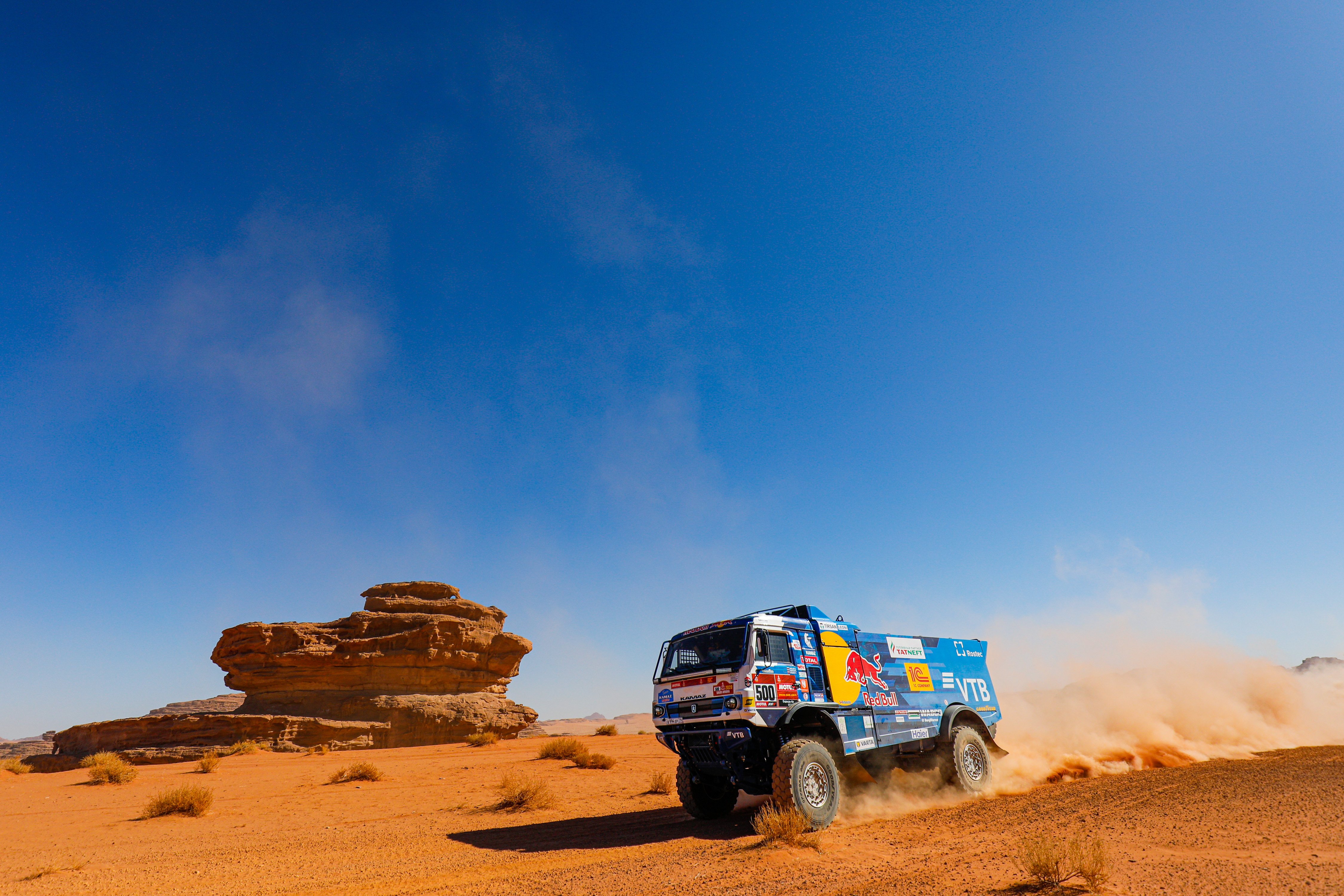 Tricky navigation traps of yesterday were replaced by unpredictable surprises on the route. As on Monday, the navigators received road books 15 minutes before the start, which only complicated passage of the distance. In such conditions, a high result at the finish is achieved through experience of the crews. The course of the third stage led the rally caravan to the mountainous regions of Saudi Arabia, where several canyons awaited the contestants: the road stretched first to the east, then to the north, after which the loop of the circular route closed at the starting point. The first and final sections are rocky terrain, and only two-thirds of the surface are sands. The task is not to puncture wheels and not get lost.

A hot battle in the truck category arouse on the route from the first kilometers. Letting the victory slip away on the final part of the second stage, Andrey Karginov’s crew of KAMAZ-master team continued to attack the Belarusian Siarhei Viazovich. Having left the mixed start four minutes behind the overall leader, the KAMAZ truck showed the best time already on the first control point. Finding the optimum pace and cleverly overcoming obstacles, Karginov increased the gap, and at the finish he was 4 minutes 54 seconds ahead of his rival, covering the distance of 427 km in 3 hours 59 minutes 15 seconds. 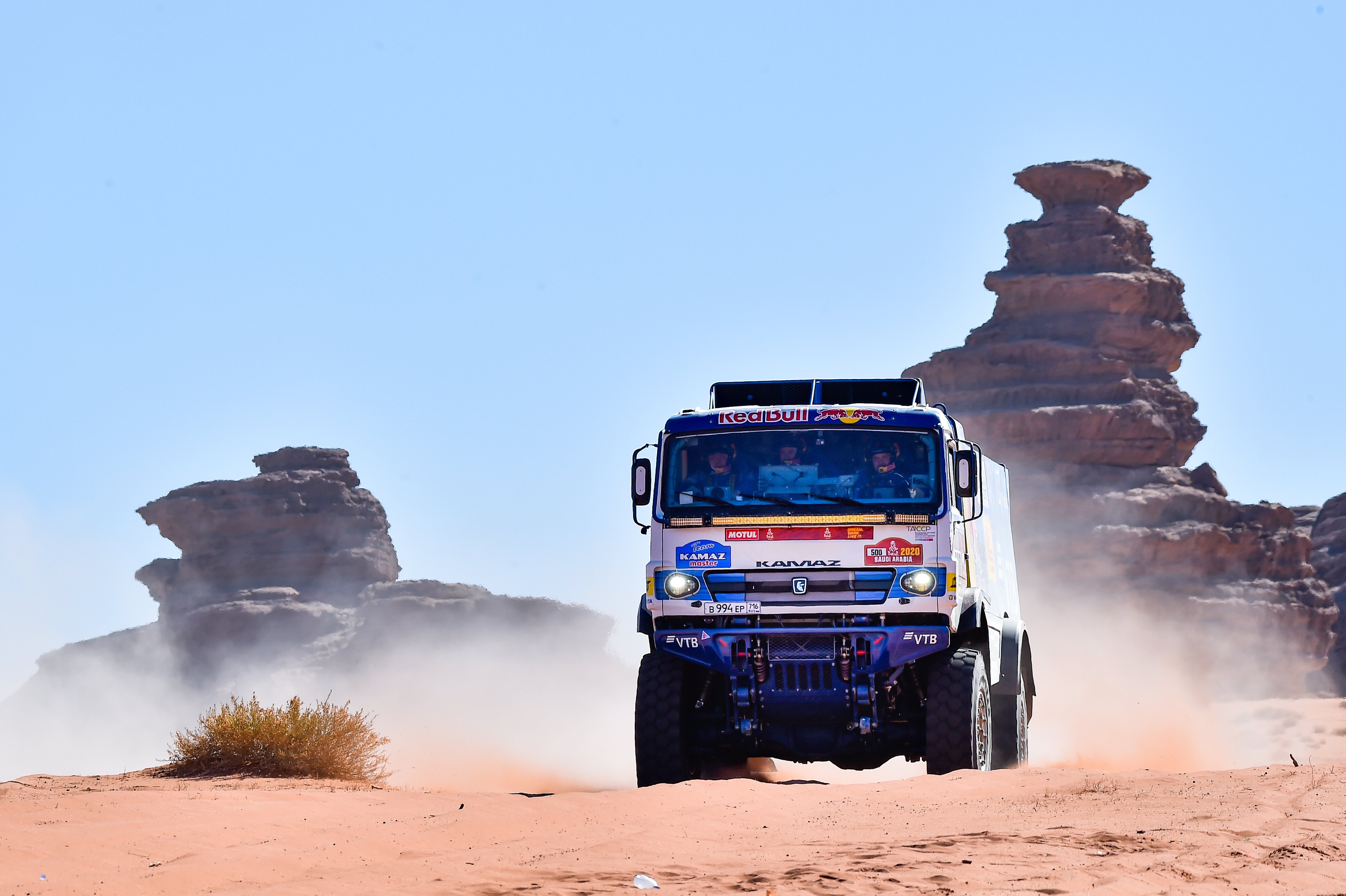 Andrey Karginov, driver of crew No 511: “Today, the stage was divided into three sections with two neutralization zones of 20 km each, where you could inspect the vehicle and take a breath. By the first neutralization we caught up with Viazovich’s MAZ, and went ahead of him on the final part. The last 100 km of the distance were very difficult: winding tracks, all in stones and boulders, we had to save the wheels. In such conditions it was very difficult to find the right path, if it can be called like that, it was very tough, and many thanks to my co-driver Andrey Mokeev, who did his job perfectly".

Siarhei Viazovich, driver of crew No 503, MAZ-SPORTauto: “Today we counted on Dmitry Sotnikov’s attack, so we did not hurry. At the finish of the first part, we saw that not he was going behind us, but Andrey Karginov. 10 km before the end of the second section Andrey caught up with us, he was a little lucky because there was such dust that one couldn’t come. On a plateau on a 90-degree turn, he saw that it was possible to “cut”, he gave a signal and we let him ahead. It seemed that the front shock absorbers leaked out, we couldn’t keep a high pace, therefore we drove after Karginov. Todaywedidn’tstandanywhere, didn’tstray. "

The sunny and cool weather, 15 degrees by feel, did not distract racers from passing the route. However, the relentless route conditions of the Dakar began to kick out contestants literally one after another. Bikers Guillaume Chollet, Martien Jimmink, Xavier de Soultrait and Adrien van Beveren received various injuries, Paulo Gonçalves spent more than 6 hours on repairs. The quad rider Tomas Kubiena damaged the engine, and the eminent Russian driver Vladimir Vasilyev, who was in top 10 in the car standings, had to abandon the Dakar: 284th kilometer became fatal for him, where his car caught fire. Sheikh Khalid Al-Qassimi did not reach the finish line either.

Unfortunately, the problems did not sidestep KAMAZ-master Team either. On the 60th kilometer of the special stage Dmitry Sotnikov’s crew, after overtaking in the dried riverbed in heavy dust, returned to the track, crossing the sand parapet of the road, in which appeared a large invisible stone covered with sand. The stone damaged the front axle beam and the transfer case housing. After spending several hours on the repair, the crew continued to move and reached the finish line with a lag of 2 hours 13 minutes 13 seconds. 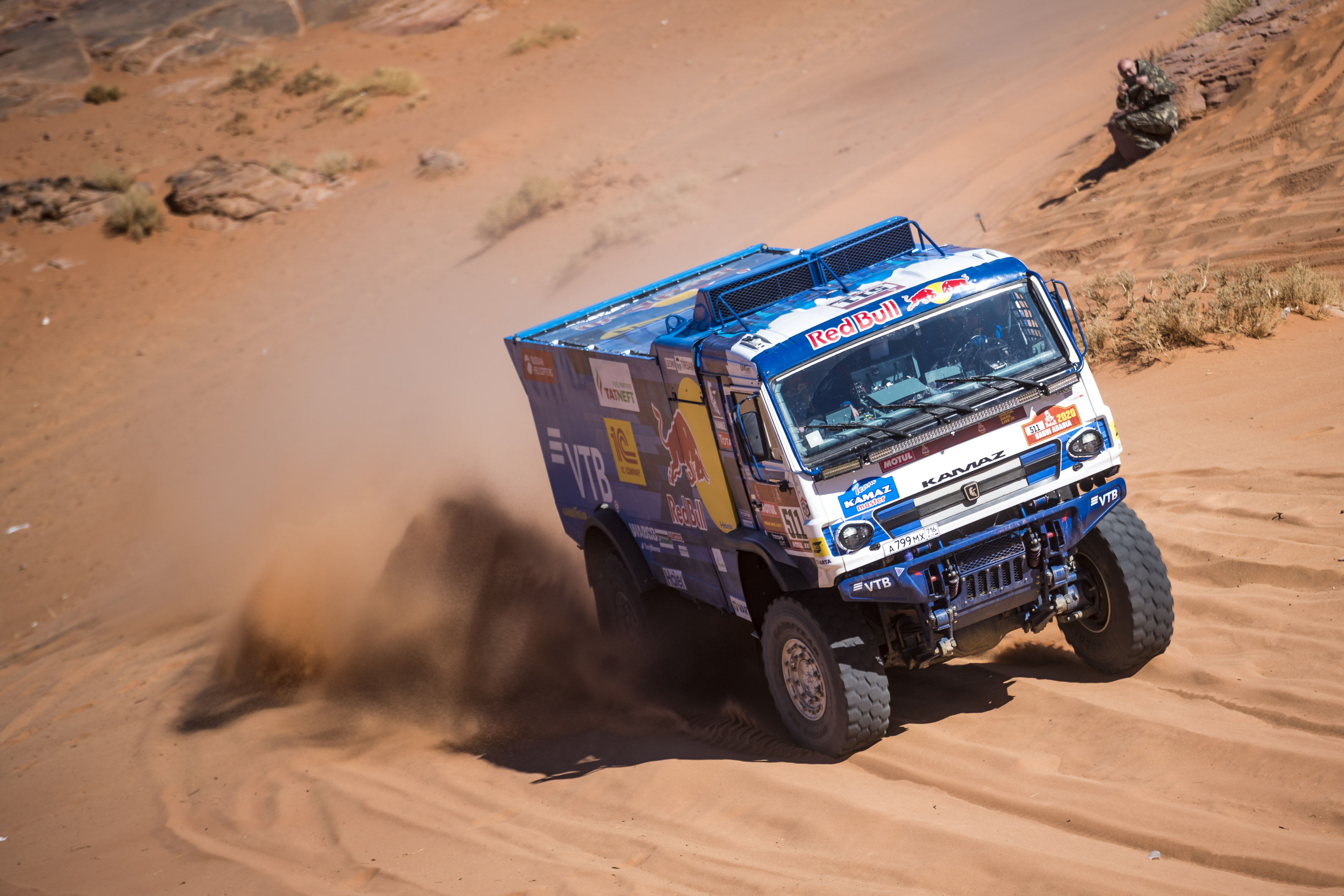 Third on today’s finish was Anton Shibalov, who lost his teammate 11 minutes 13 seconds. The crew of the winner of the Silk Way Rally 2019, like Karginov, steadily and faultlessly crossed the entire distance without ever falling out of the top 3.

Anton Shibalov, driver of crew No 516: “There were a lot of different and sharp stones on the track, but the wheels didn’t fail, tires worked perfectly. We tried to drive carefully, save the truck. During driving to the height of 1400 meters we did not face problems with the engine. This race shows that from the very first days there are real Dakar special stages."

Dmitry Nikitin, ci-driver of crew No 516: “The day in the navigational plan was better. Yesterday's error analysis allowed to drive in stable way today, stay on the right courses and find the right road. We were a little slower in pace, but it was important to save the wheels. The sections were various: approximately on the first 120 km we developed the maximum speed on a stony road, then moved to another part, where were beautiful mountains and yellow-brown sand. The long finish went along rocky riverbeds, with no roads, only directions. On the last 40-50 kilometers we met locals, one of them jumped out in front of us in a jeep and did not let ahead, we had to sit 40 seconds behind in the dust, then managed to overtake him off-the-road. "

One more Russian crew showed the ninth best time of the day. Eduard Nikolaev stopped twice on the course of the race, losing about 22 minutes. The lag of the 5-time winner of the Dakar, being slightly slower than Shibalov in pace, was 34 minutes 23 seconds on the third stage.

Eduard Nikolaev, driver of crew No 500: “We made two stops: we punctured a wheel before the first neutralization, spent 6 minutes to replac it, and then failed the westgate valve, which is responsible for engine power. By the time we figured out what the problem was, we lost 16 minutes. After eliminating technical problems, we drove at our own pace. We got into the dust, but this is Dakar. There were practically no questions regarding navigation."

In the overall standings Andrey Karginov more than twice shortened the gap with Siarhei Viazovich. Anton Shibalov climbed to the third line. Eduard Nikolaev moved up one position, now he is the fifth.

On Wednesday the contestants of the Dakar 2020 will have a mixed start of the fourth stage along the route Neom - Al-Ula with the length of 672 km, 453 of which will be a special section. Sports crews will go east - deep into Saudi Arabia, and will overcome equal parts of sandy straight and gravel areas, complicated by challenging navigation. 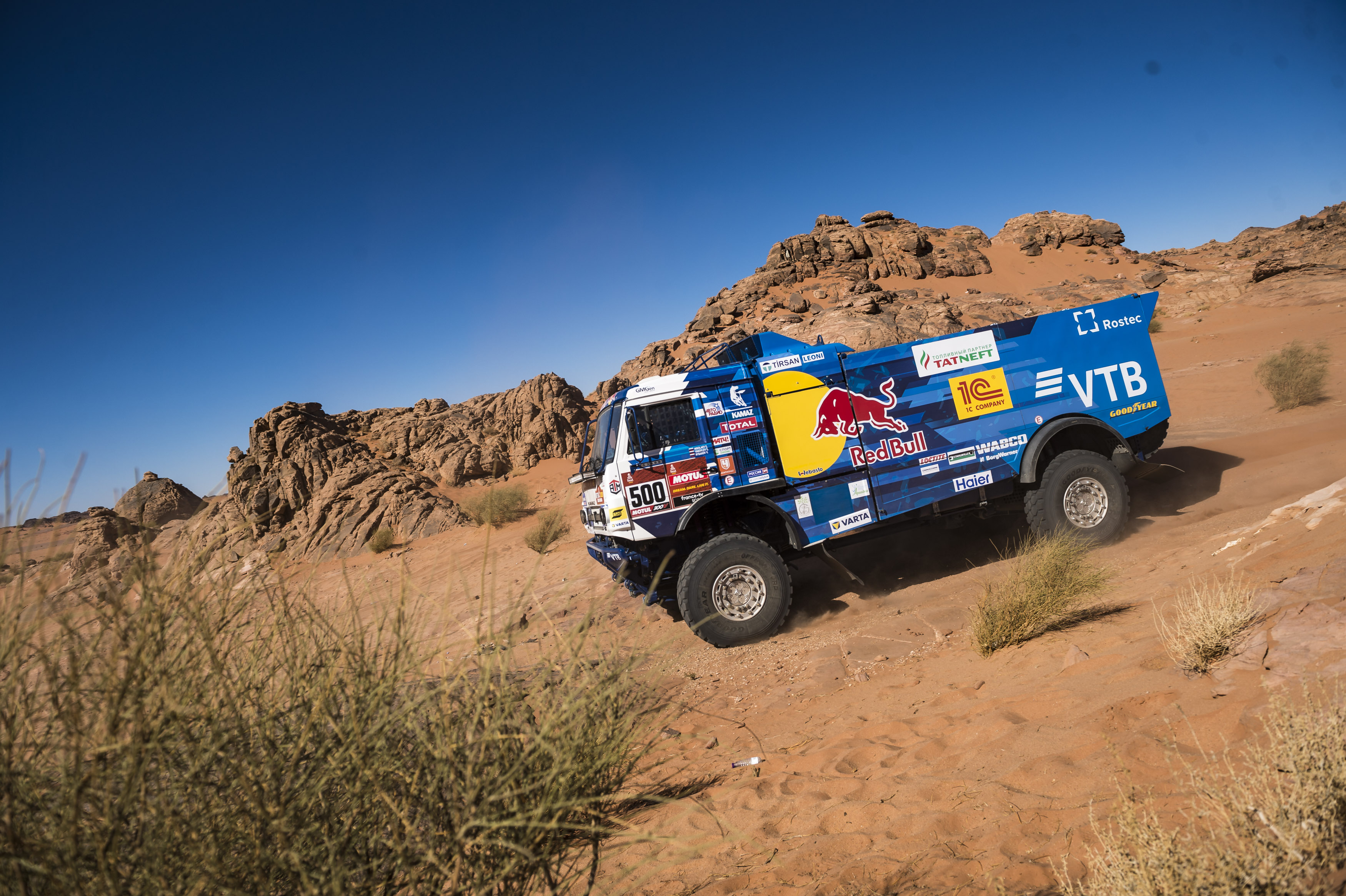