Karginov strengthened his lead in the general classification, Dakar 2020 has finished for Nikolaev

The sixth stage of the international Dakar Rally 2020 in Saudi Arabia took place along the route Hail - Riyadh on Friday, January 10.

For KAMAZ-master team and numerous fans Friday began with the expectation of news from Eduard Nikolaev’s crew, who had faced with technical problems a day earlier during the fifth stage of the Dakar Rally. The hardest engine repair was done in conditions, not very suitable for this: the sun in Saudi Arabia set early and by the evening the temperature dropped to three degrees Celsius, and the work continued until the very morning. To warm up a bit, they had to make a fire.

In total, the Russians spent almost 14 hours on the repair and could continue driving. The remaining 200 km on the dunes the crew overcame in the dark, which only top-level drivers are capable of. Having collected all the control points, Nikolaev finished and arrived at the bivouac at around seven in the morning, Moscow time. 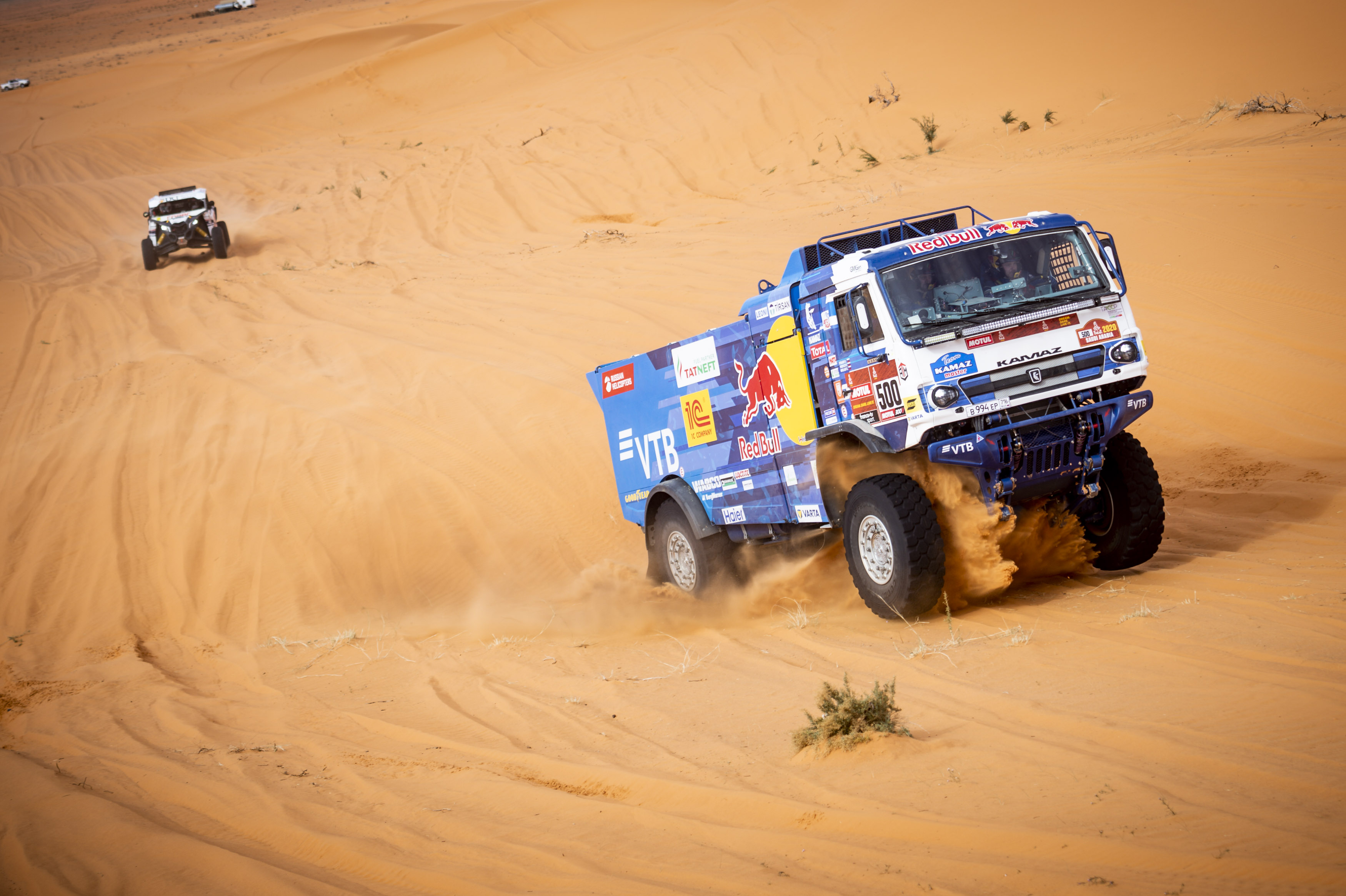 “Unexpectedly, it happened to our engine. We fixed it, and I think we will drive the whole race. The most important thing is that we can help our guys and the team, take the role of the fast assistance truck. Our gas joint was broken through, and almost all cooling liquid leaked out from the first and sixth cylinders. In the field conditions it was not easy to remove the 120-kilogram cylinder head, it needed to be removed and cleaned. But we have an experienced crew, we did everything quickly. It's a marathon, it's the Dakar. Each contestant must go through this. You are not a marathon racer, if you didn’t break down in the desert and didn’t do the repair yourself. This is probably the real Dakar experience. It’s a pity that this happened to our crew, but we take the most useful from the situation for this not to happen again. The most important thing is how we got out of this situation: we fixed it, drove to the finish line, taking all the points," said Eduard Nikolaev, having arrived at the location of the team.

The way to the capital of Saudi Arabia, Riyadh, was the longest since the start of the marathon - the rally caravan was supposed to get over 830 km, including 477 km of the special stage. The course, which was laid by the organizers of the competition, completely passed through sands and dunes, covering 90% of today's route.

For the second day in a row, three KAMAZ trucks started first in the truck classification. Dmitry Sotnikov, Anton Shibalov and Andrey Karginov went to the distance in four minutes from each other. The main rival Siarhei Viazovich was 30 seconds behind. Sotnikov, whose lag in the general classification is more than two hours, took a role of a fast assistance and on the first kilometers of the stage let his teammates forward.

Unfortunately, on the 33rd km of the special stage, the engine in Nikolaev’s truck broke down completely. The crew started with five working cylinders, as there was no time to repair the truck on the bivouac in the morning. A part of the connecting rod gear fell out from the bottom of the engine, from the pan. The whole truck was spilled with oil and stood motionless on a sandy plateau. The team management sent a service vehicle to evacuate the racing truck and the crew. Dakar 2020 is over for the winner of the last three years.

By the middle of the stage, Karginov caught up with Shibalov and took the lead. Both crews continued to move at the same high pace and finished with the best result of the day. Crew No 511 covered the distance in 4 hours 56 minutes 18 seconds, being ahead of their teammates for 4 minutes 21 seconds. Going behind Dmitry Sotnikov, Viazovich, became the third and lost 12 minutes 32 seconds. 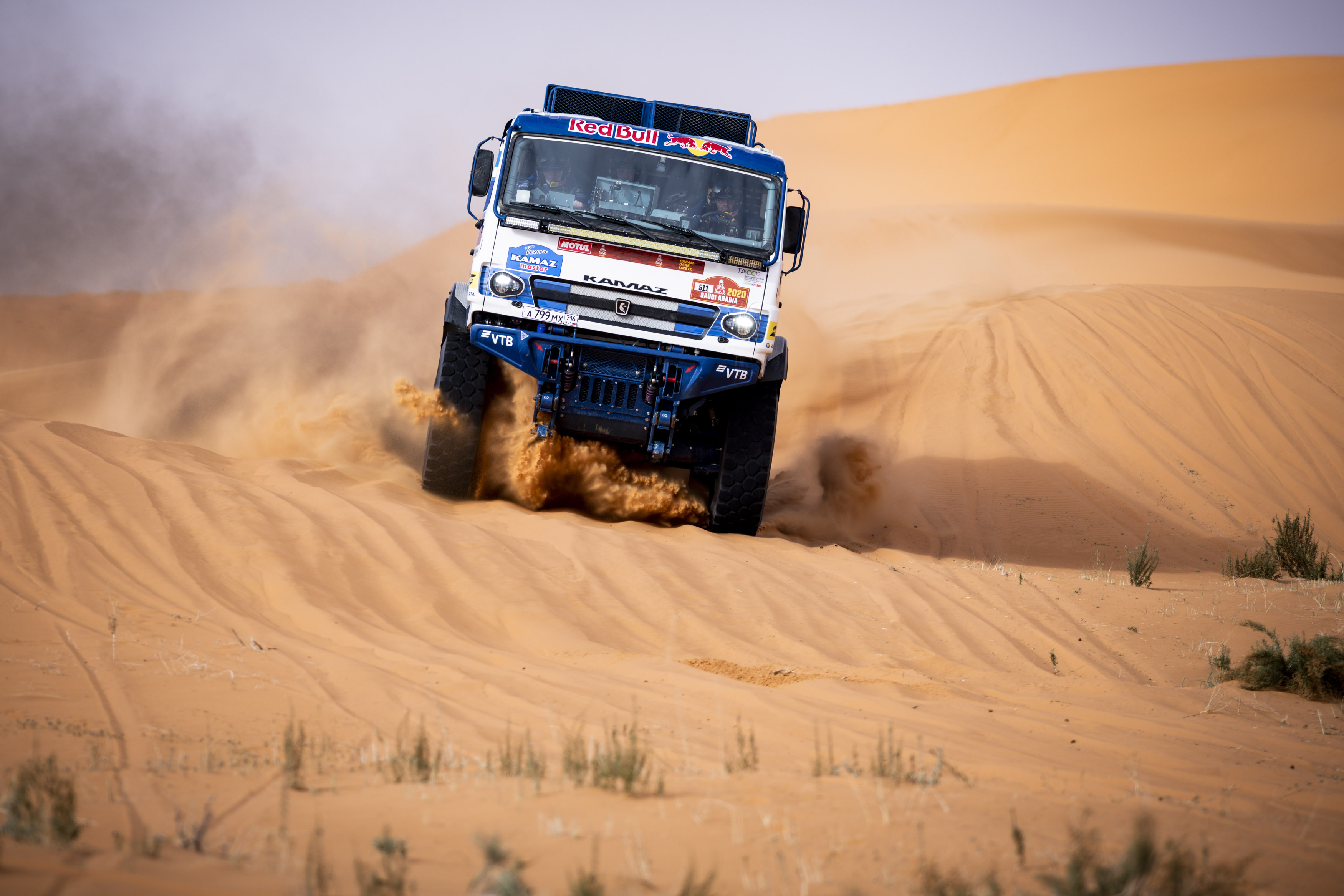 Andrey Karginov, driver of crew No 511: “An interesting sandy special stage, almost without stones, very fast roads. Small dunes began, this is the best thing to roll in, remember them and feel the truck. The truck does not fail, everything is fine. Navigation is difficult, but everything is fine, the whole crew are working on the navigation. We caught up with Anton Shibalov, he let us ahead, and so the two of us reached the finish line."

The third KAMAZ crew showed the fourth time (+14:46). The sixth race day, despite its duration, turned out to be pretty tight according to the results: Janus van Kasteren lost 15 and a half minutes, Martin Macik - 21, and Ales Loprais - 22.

Anton Shibalov, driver of crew No 516: “We are satisfied with the result, despite small problems at the beginning of the race. I think these were the minimum losses relatively to other contestants. We are glad that the Dakar equator has come. The main thing now is to keep the result. Today the route variety has become, there almost were no stones. The whole day there were fast roads, high and uncomplicated dunes, interesting in their configuration. Wedrovesmoothly." 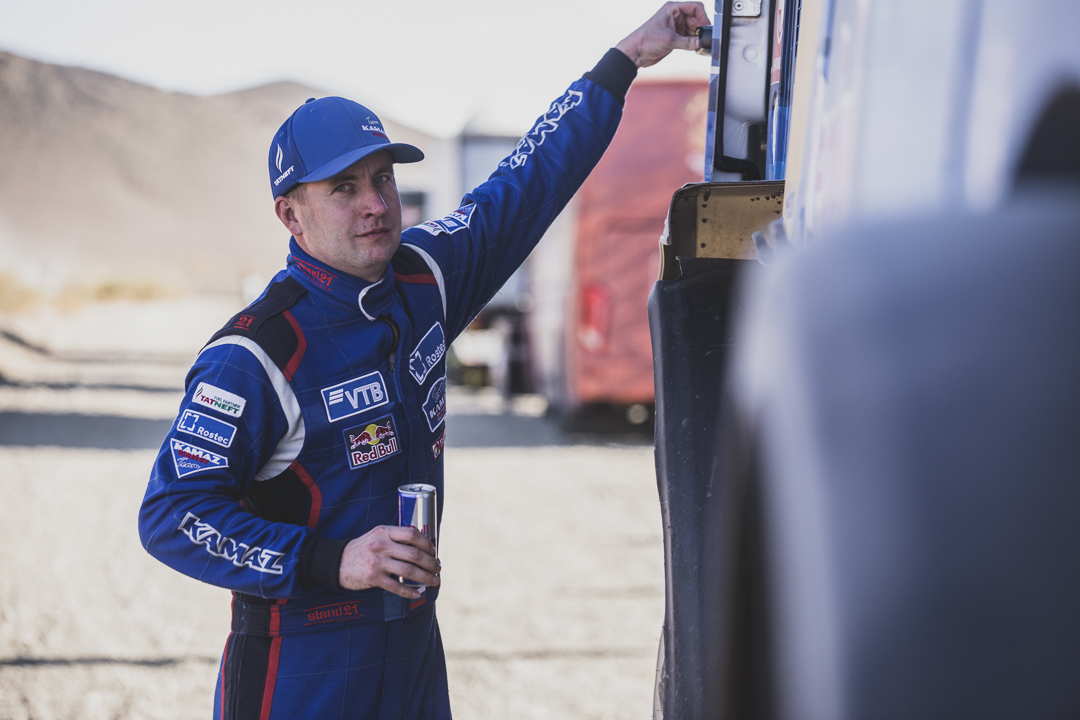 Ivan Tatarinov, mechanic of crew No 516: "Yesterday we had a good result, the same as today. Everything goes well, and the most important – in a stable way. We work calmly, the guys give important tips. I take this opportunity to say hi to my family." 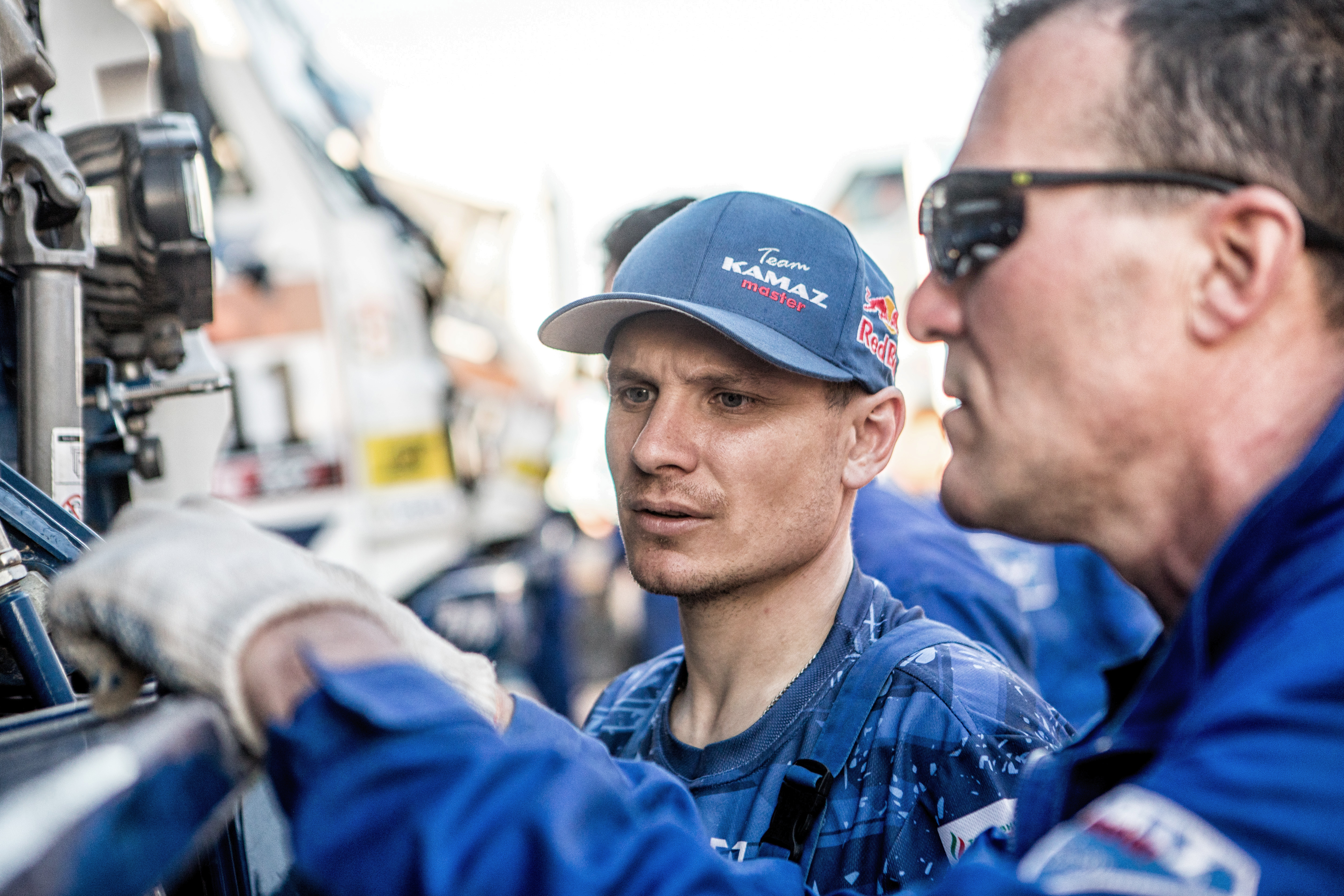 In the general classification Andrey Karginov increased his lead over Anton Shibalov up to 19 odd minutes. The Belarus Siarhei Viazovich loses 36 and a half minutes. The rest contestants in the truck classification lose approximately two hours and more.

Dmitry Sotnikov, driver of crew No 501: “Today we drove in the role of fast assistance truck, covering crews of Karginov and Shibalov, letting both pass. We saw that Viazovich was going behind us. We didn’t try to get away from him, we went calmly and accurately. If he had decided to attack, we would have let him ahead. "

Ruslan Akhmadeev, co-driver of crew No 501: “There was a lot of sand, somewhere were stones. The legend was handed out 15 minutes before the start, we rewrote all the changes that had been announced at the briefing. Despite the long route, the road book was thin. We drove through the sands, the bindings were long - 9-10 km long. It can be said that only a driver worked today (laughs). In some places there were difficult dunes, we took one of them without any difficulty, and went further. Today the terrain was monotonous, there was less grass. We had to watch the pressure in tires. "

On Saturday contestants of the Dakar 2020 will have a rest day in the capital of Saudi Arabia. The race will continue on Sunday with the seventh stage along the route Riyadh - Wadi al Dawasir, its length will be 741 km, 546 of which will be SS. The longest route of the marathon will take place in the dunes and off-road towards the south-west, where navigators will have to demonstrate their experience. 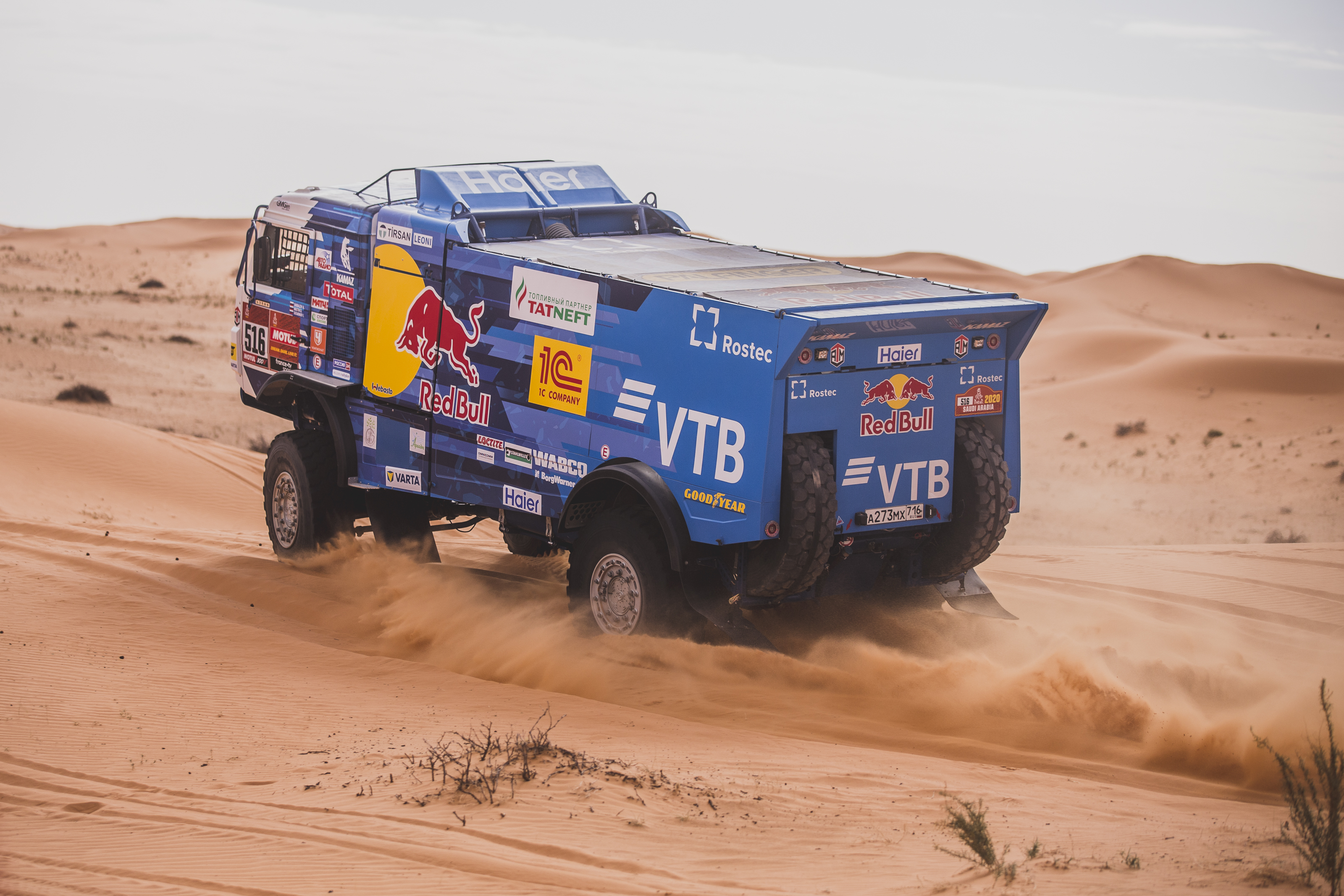