Eduard Nikolaev: “It was a real Dakar day.”

A long two-week journey called the Dakar is coming to an end. Already on Friday the winners and prize-holders will be known in the race, but for now the award contenders have to keep their high positions in one of the most extreme special stages of the 44th edition of the rally marathon.

Thursday in Saudi Arabia was a loop route in Bisha with a length of 346 kilometers. At first it went strictly to the north, crossing the administrative borders from the province of Asir to Mecca, and back - to the south with a stop in the province of Riyadh. Getting lost in the first few kilometers among sandy roads inside dry riverbeds and small winding canyons was as easy as taking a wrong turn at the next intersection of tracks and sandy passages in the middle of a huge plateau where desert was stretching for many kilometers ahead.

The movement of sports vehicles on this hot and windless day was also difficult due to thick dust, which did not allow those who started behind the rivals to gain cruising pace. At any moment stones, bushes and sand springboards were ready to get in the way of a crew and stop it, depriving them of their cherished dream of reaching the finish line and climbing to the podium. Further was a 60-kilometer segment with giant dunes of the third category, reaching a height of tens of meters. And if the ascent into such a dune was visible from far and the overcoming tactics was calculated by a crew in advance, then a sudden steep descent at a sharp angle was fraught with danger to people and vehicles. The pace was also affected by sections of small dunes, where it was not about speed, but about the technique of their passage: trucks in this place looked like ships caught in a storm, going up and down on the waves. 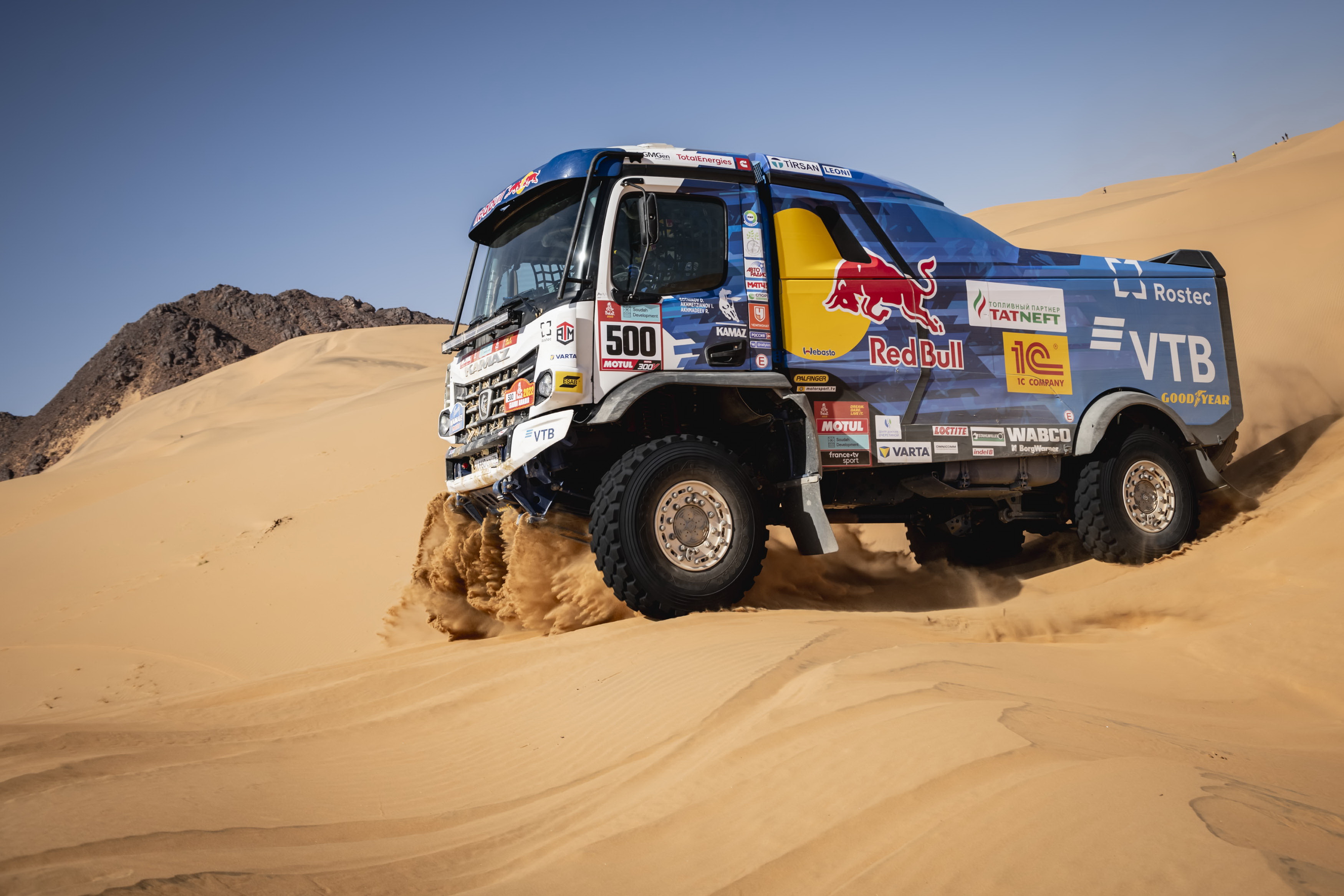 By the start of the penultimate stage, KAMAZ-master crews had created a comfortable advantage over their rivals and eliminated the risks in the race in the final days - reliable passing and not chasing the result at any cost came to the fore. Withdrawal in such a situation would be an unpleasant end to an exhausting marathon, in which dozens of team members expended efforts throughout the year.

At the time point of 43 km, the best time was shown by the leader of the truck standings, Dmitry Sotnikov, but behind the back of the Russian a real battle for the result unfolded. The Lithuanian Vaidotas Pashkevicius at his debut Dakar pleasantly surprised with his aim to get into the top ten of the strongest drivers in the world and lost only 6 seconds to Sotnikov. Martin Macik also showed a high pace, going every year faster in the second half of the Dakar. There also were other contenders for improving positions in the final standings – Victor Versteijnen, Janus van Kasteren and Ignacio Casale. But that was only the beginning.

Around the 30th kilometer, Anton Shibalov's truck encountered technical difficulties with the exhaust system. Most likely the cause of the burst muffler pipe was severe off-road and shaking. Improvised means were enough to secure the damaged element, but this affected the time and subsequent pace of the drivers. At the first way point Shibalov became 35th. Dmitry Sotnikov sat down on the bottom of a high dune. Eduard Nikolaev came to rescue his teammate. This case proves that KAMAZ-master in difficult situations act primarily as a team. Nikolaev, lagging behind Sotnikov in the general classification by only 10 minutes, may not have stopped, leaving Sotnikov at a standstill to the crews of Karginov and Shibalov, going behind. This would immediately make him the leader in the truck classification and practically ensure the award of the sixth in his career "Golden Bedouin" at the finish in Jeddah. But the KAMAZ-master crews put team interests above their own. 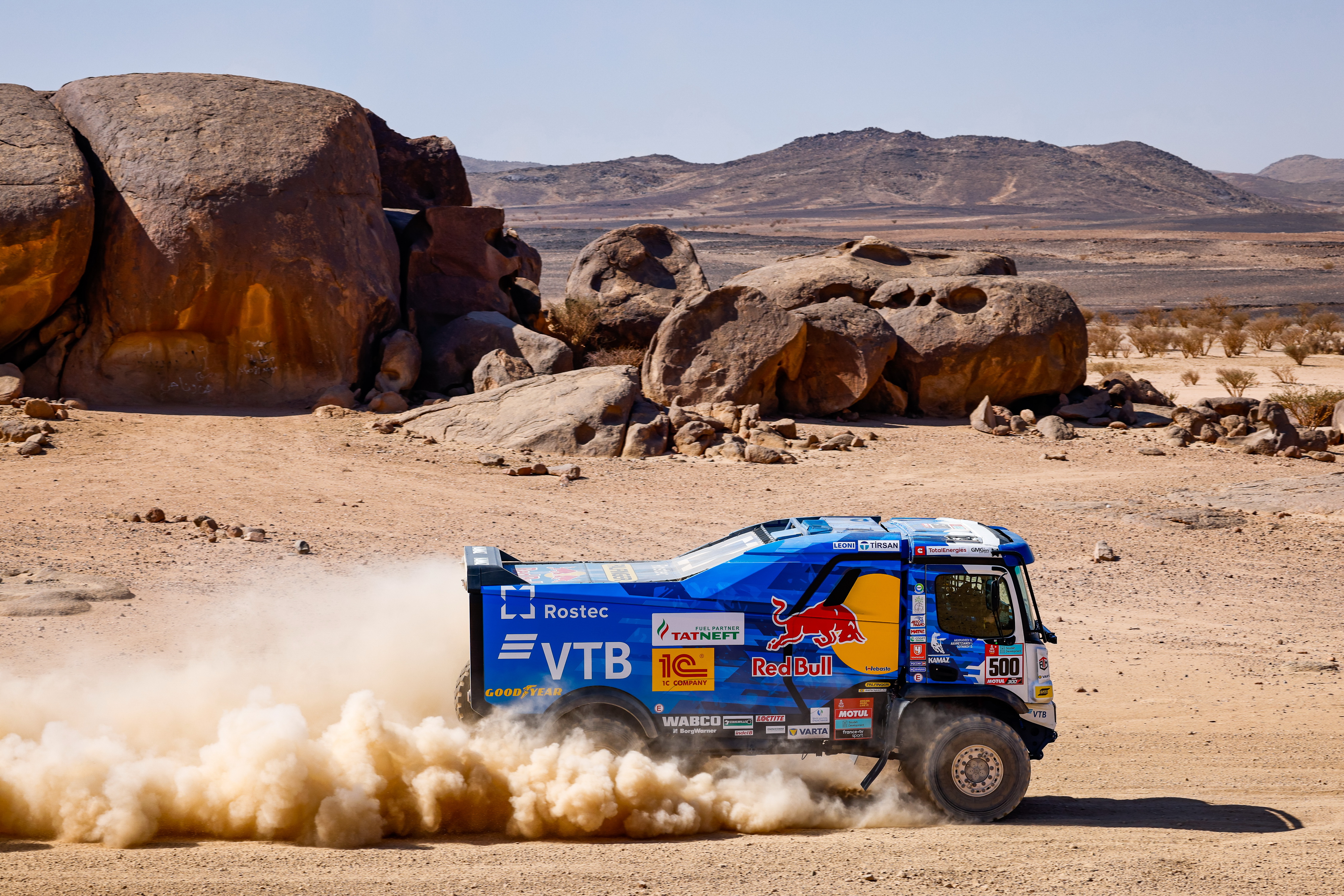 Further in the stage menu were huge dunes and here the situation changed dramatically. The gaps in time between the crews began to grow rapidly, and the three-time Dakar champion in the quad category Ignacio Casale, riding a TATRA truck for the second year in a row, became the leader. The Chilean drove the second segment 5 minutes faster than Sotnikov. Andrey Karginov and Eduard Nikolaev picked up the pace, climbing into the top 3.

The next more than 100 kilometers were also not easy for the rally participants. Stunning landscapes with alternating multi-colored sands and rare mountain heights could distract only novices. Experienced navigators followed the complicated navigation and barely noticeable tracks hidden among the thorny bushes.

In the remaining third of the distance, small and soft dunes once again changed the order in the stage classification. The crew of Casale was twice at a standstill on the track, losing about an hour in total. Crews also spent extra minutes in finding the right course on sandy paths between winding valleys, driving sports vehicles in a channel from which it was not so easy to get out.

KAMAZ-master representatives could take an advantage of the failures of their rivals. Eduard Nikolaev finished with the first time - 3 hours 54 minutes 45 seconds. Andrey Karginov lost 15 seconds, Dmitry Sotnikov - two minutes. For the second day in a row, the family of van den Brink finished one after the other. And for the first time in history, son Mitchel overtook his father Martin - the difference was only 2 seconds after 346 kilometers. In a matter of seconds from the 19-year-old driver, Pascal de Baar and Richard de Groot finished the race. 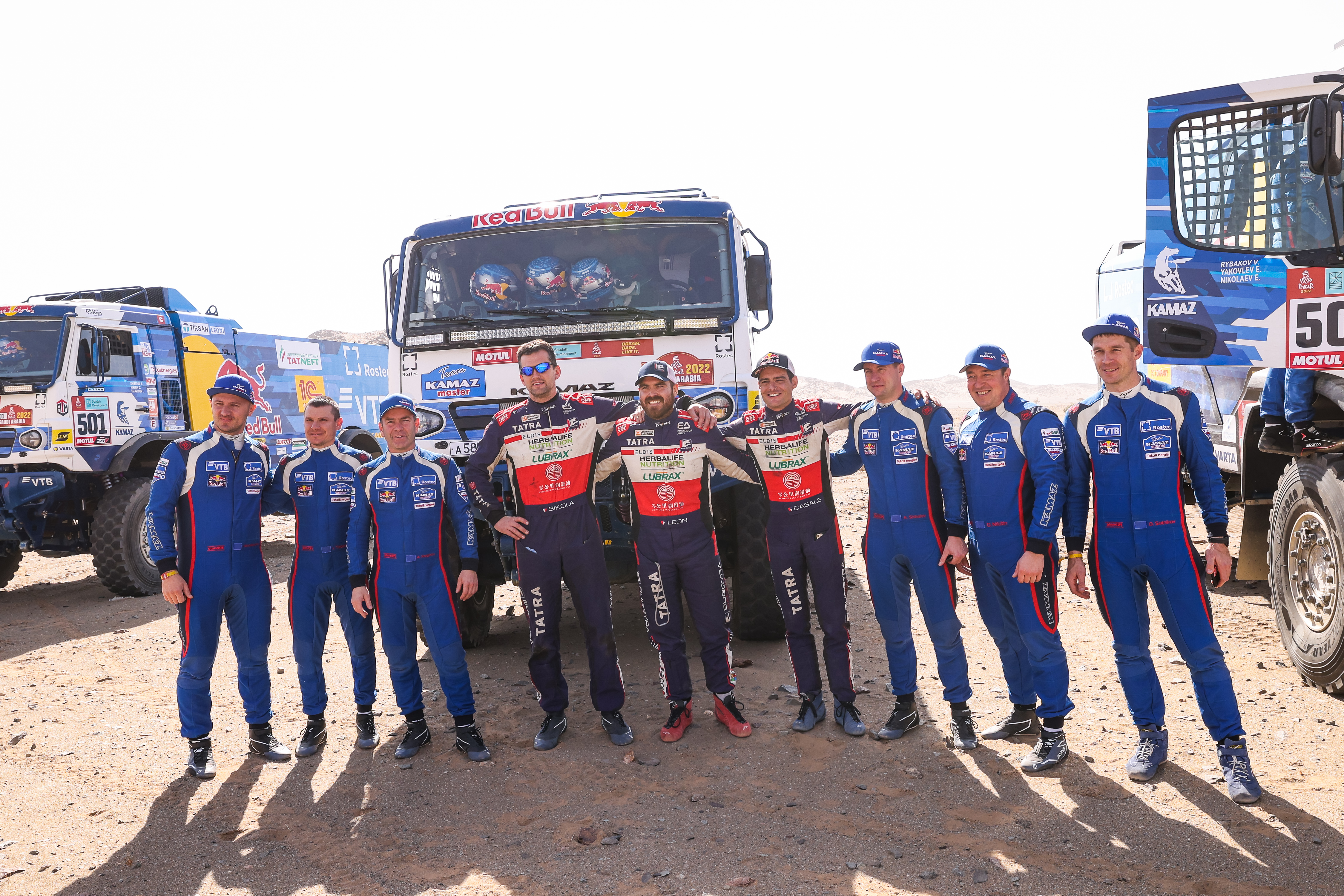 Eduard Nikolaev, driver of crew No 505: “Today was a difficult and interesting special stage, it reminded me of Argentine Dakar stages in South America. The race was for endurance. Very hard off-road, a lot of difficult sands and dunes. But we did it. We had to circle around in search of a hidden control point in one place with other crews. Dmitry Sotnikov got stuck on one of the dunes and we helped our crew to get out. Three of us already reached the neutralization zone, Andrey Karginov joined us. A real working day at the Dakar, we wish there were more of them. For many these conditions were unexpected.

Dmitry Sotnikov, driver of crew No 500: “We started first in the truck category, it was not easy with navigation. There was a large dune of the third difficulty level. The trail went straight, and we went a little to the left and the detour was not visible. We decided to try to drive. But the top turned out very loose, and when I saw a steep descent, I tried to pick up speed, but it was not enough. As a result, Eduard Nikolaev pulled our truck, for which we are very grateful. Then we went after the guys. At the end we saw that Andrey Karginov was looking for a point. The stage was very difficult, a lot of off-road, riverbeds, soft dunes. This hadn't been for a very long time. Today for the first time in Saudi Arabia we “tried” such high dunes. The last time similar dunes were in Peru. It was a working special stage, I think everyone got “hit” today.”

Anton Shibalov, driver of crew No 501: “The stage did not turn out very well for us. Almost at the very beginning problems began with the exhaust system - the muffler pipe burst out. Probably it was due to shaking. We had to stop, contrive with a repair - we built up a pipe, tied it with wire. Due to high temperature, there was a risk of burning plastic pipes and facing serious problems. The remaining 330 kilometers to the finish line we drove more carefully. I think we didn’t lose much time, but the main thing was that we could finish the special stage.”

In the general classification, the struggle for the Golden Bedouin has seriously escalated - Sotnikov and Nikolaev are separated by only 8 minutes.

On Friday the racers will have the final day of the Dakar. It will be the shortest 164-kilometer special stage that takes the rally caravan to the Red Sea coast - to Jeddah. 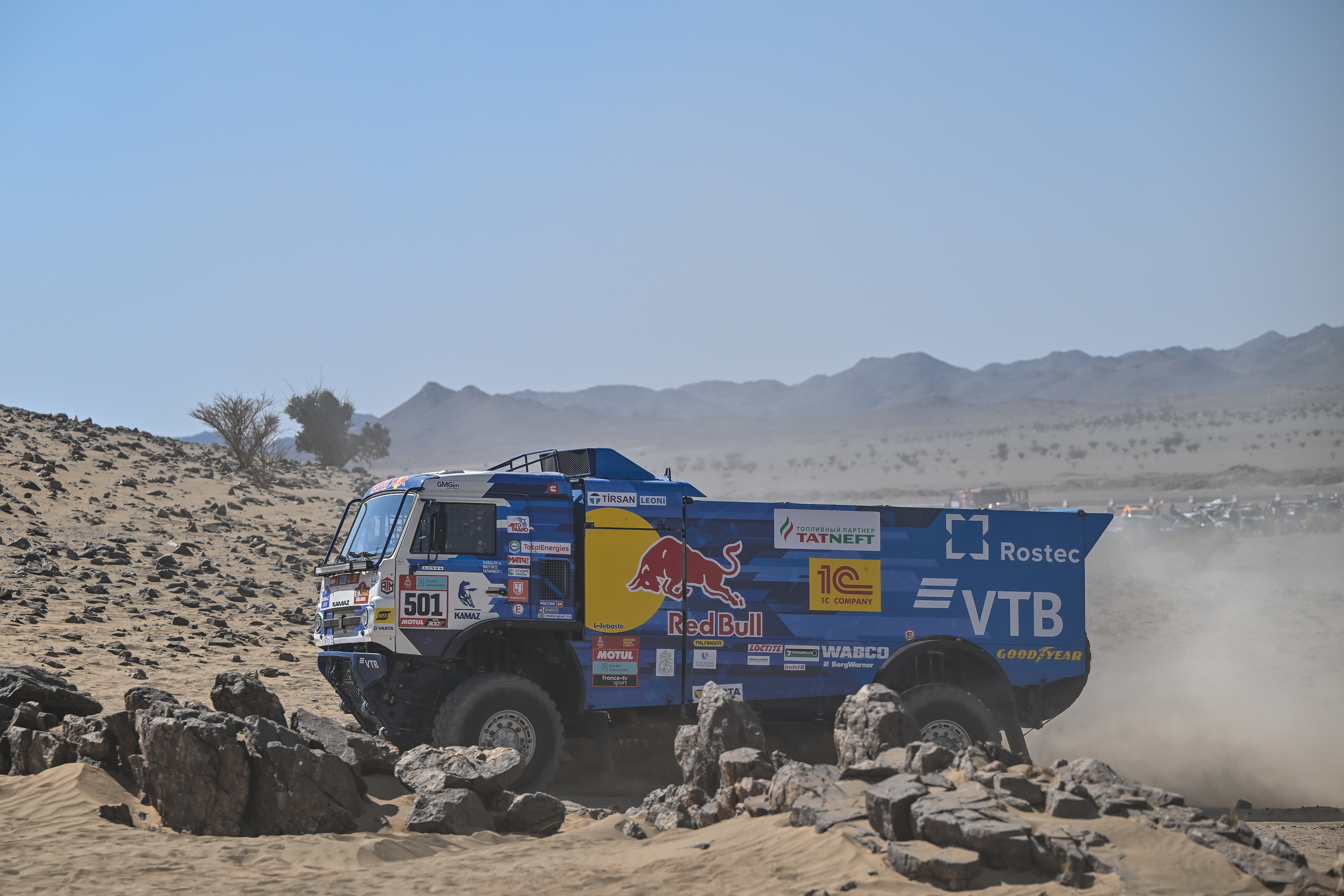 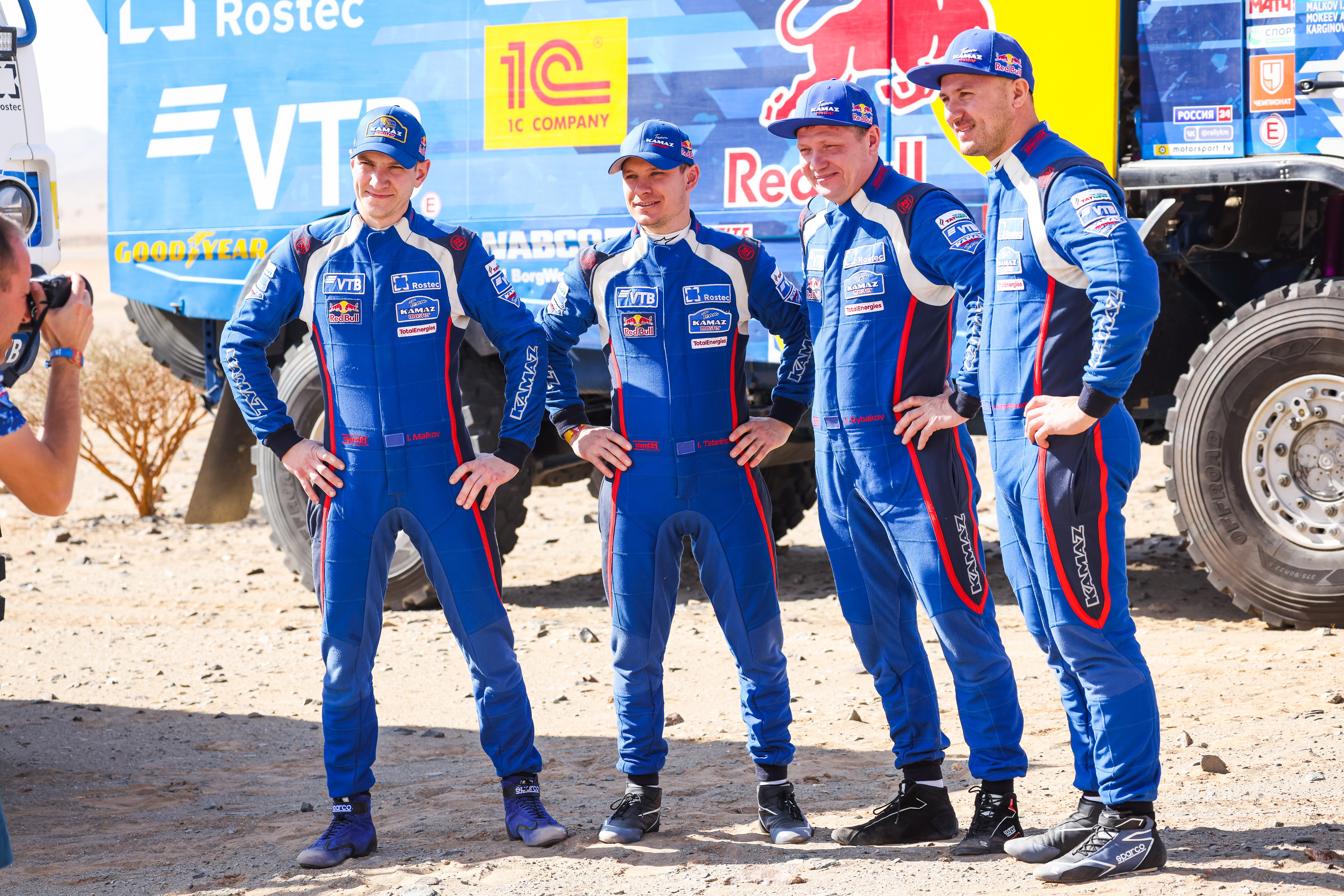 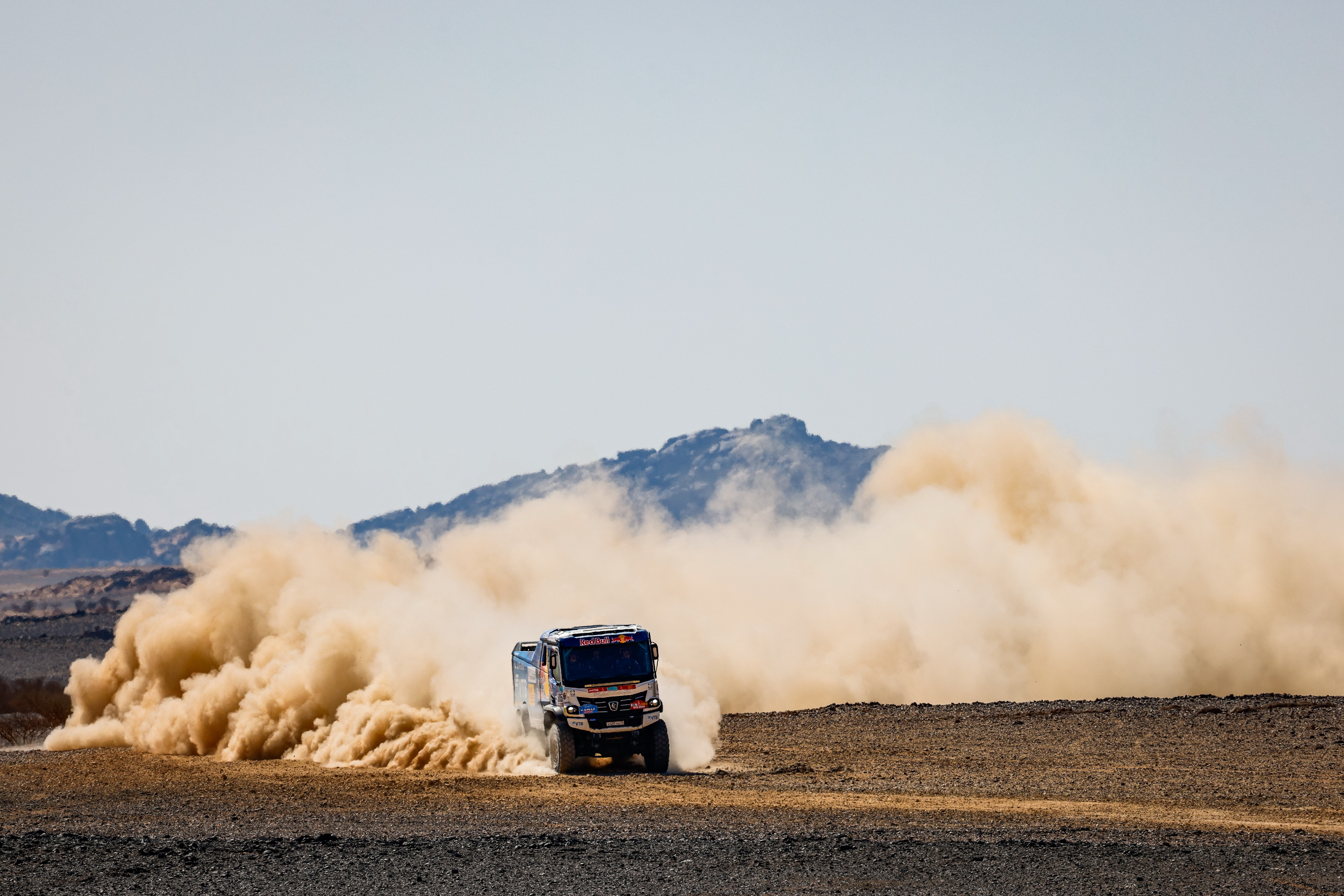