Short high-speed special stages of the eleventh edition of the international Silk Way Rally do not allow rivals to bring serious time margin to the finish line. The time lag between the drivers is calculated in seconds, so stopping for repairs or getting stuck in one of the many rivers or swampy traps will most likely exclude such a crew from the list of candidates for the podium.

As the racers say, it is important not only to attack on the track, but also to maintain a balance between maximum speed and navigation. Yesterday the leader of the truck classification Dmitry Sotnikov, after two victorious stages, became only the fifth, allowing his competitors to come closer to a distance of several minutes. Taking into account that the fourth special stage almost completely repeats the track of the previous one (only at the end the organizers added a 31-kilometer loop, increasing the length of the distance to 164 km), racers should not expect surprises from the route.

The marathon stage makes its own adjustments to the tactics of passing the stage: not everyone was able to keep the wheels safe till the finish in Kosh-Agach, and in order to successfully reach the bivouac in Gorno-Altaisk, where the crews are waiting for a full service, it is important not to stay without a spare wheel at the special stage. And there were enough places where you could make a puncture today. The rally directorate paid special attention of the contestants in the truck category when cutting off: in the steppe area, covered with small grass, there was a large number of stones, and fesh-fesh only hided them from the eyes of drivers and navigators. 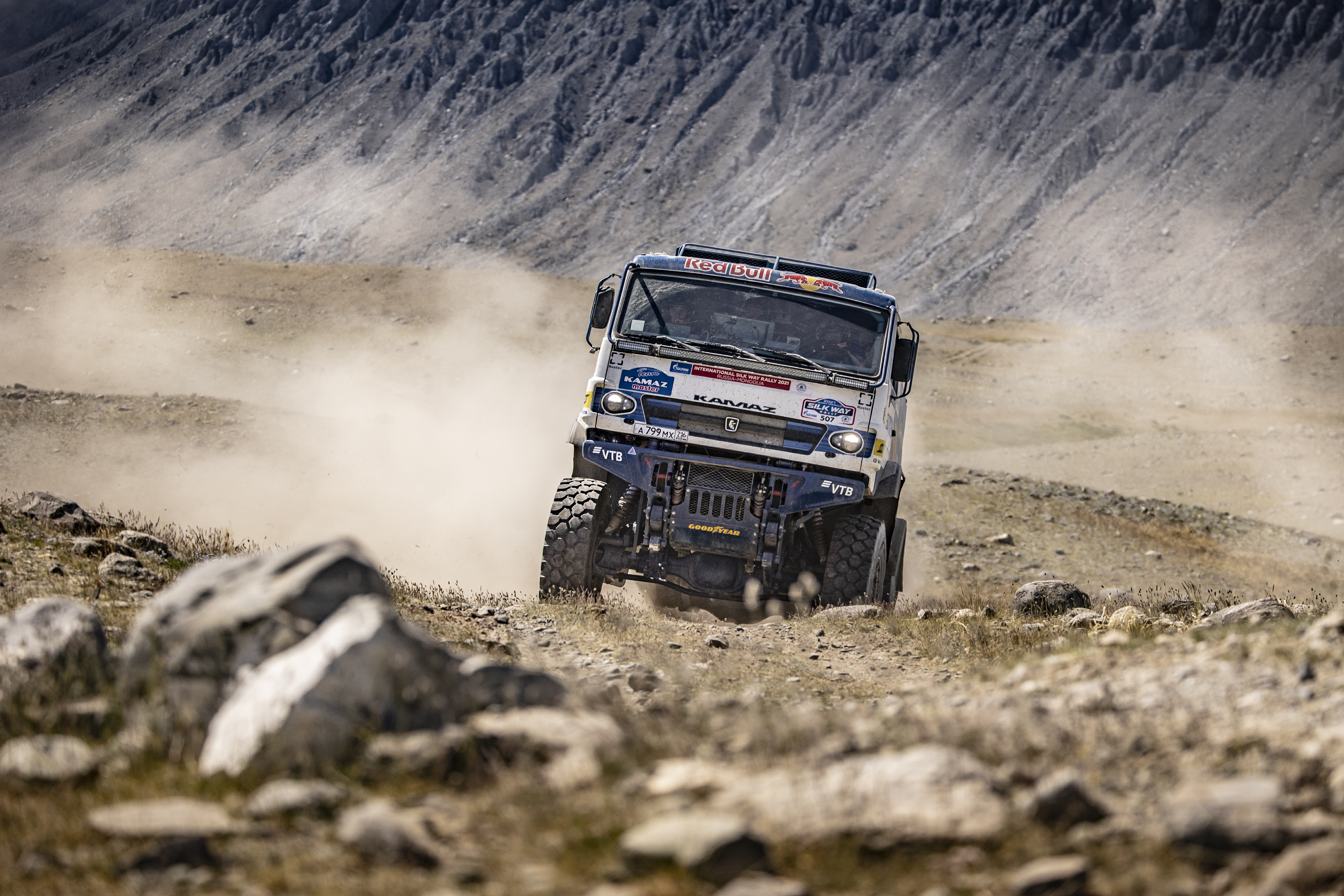 Monday for the rally caravan began very early: already at 2 am Moscow time, the first bike went to the start of the special stage in order to join the racing mode in an hour and a half. But not everyone got to the start: yesterday during the race engine of the leader of the bike category Ross Branch from Botswana broke down, and the American Andrew Short drowned his iron horse in the ford, unable to dry it on the shore. Two retirements a day once again show the cunningness of rally-raids, where even an advantage of many hours does not guarantee a final victory.

The penultimate racing day began with high-speed winding sections on a stone plateau and smoothly turned into steppe paths, alternated with mountain rivers. It seemed that the track was already well studied, but already after 28 kilometers, Eduard Nikolaev, who was going second in the general classification, lost more than 13 minutes to Andrey Karginov. The reason was the very stones that exposed their sharp edges after the intense first marathon stage - the road was literally ploughed by sports cars. Only a few crews could avoid wheel problems. Aliaksei Vishneuski on MAZ punctured three wheels, two of which replaced during the special stage, Airat Mardeev punctured two, but could get to the finish line on pumping.

Andrey Karginov could not avoid serious difficulties as well - after one of the fords on KAMAZ, the cooling fans of the main radiator went out of order. It took about an hour to repair them, and crew No 507 did not stop teammates - there was a fight for the podium, and they could lose precious time. Dmitry Sotnikov's truck was also damaged. Closer to the finish line, at an improvised junction, the leader of the overall standings, when passing a sharp turn, did not notice the ravine and moved into a small ditch, damaging the front plastic body kit of the cab. At the moment of clash with a sheer earthen wall, the speed of the truck was minimal - the crew was not injured and continued to move towards the finish line.

Another stage of the Silk Way Rally was lead by Dmitry Sotnikov - for the current winner of the Dakar this was already the third prize. Anton Shibalov lost less than two minutes, and Siarhei Viazovich showed the third best result, losing only nine seconds to the second place. A high result was shown by 23-year-old Bogdan Karimov, who became the fifth. The SWR rookie is ahead of the experienced Martin van den Brink.

In the overall standings, Dmitry Sotnikov's crew strengthened their lead. The Belarusian Siarhei Viazovich climbed to the second place, Anton Shibalov is the third now. The final day of the race will take place in Gorno-Altaisk on Tuesday. 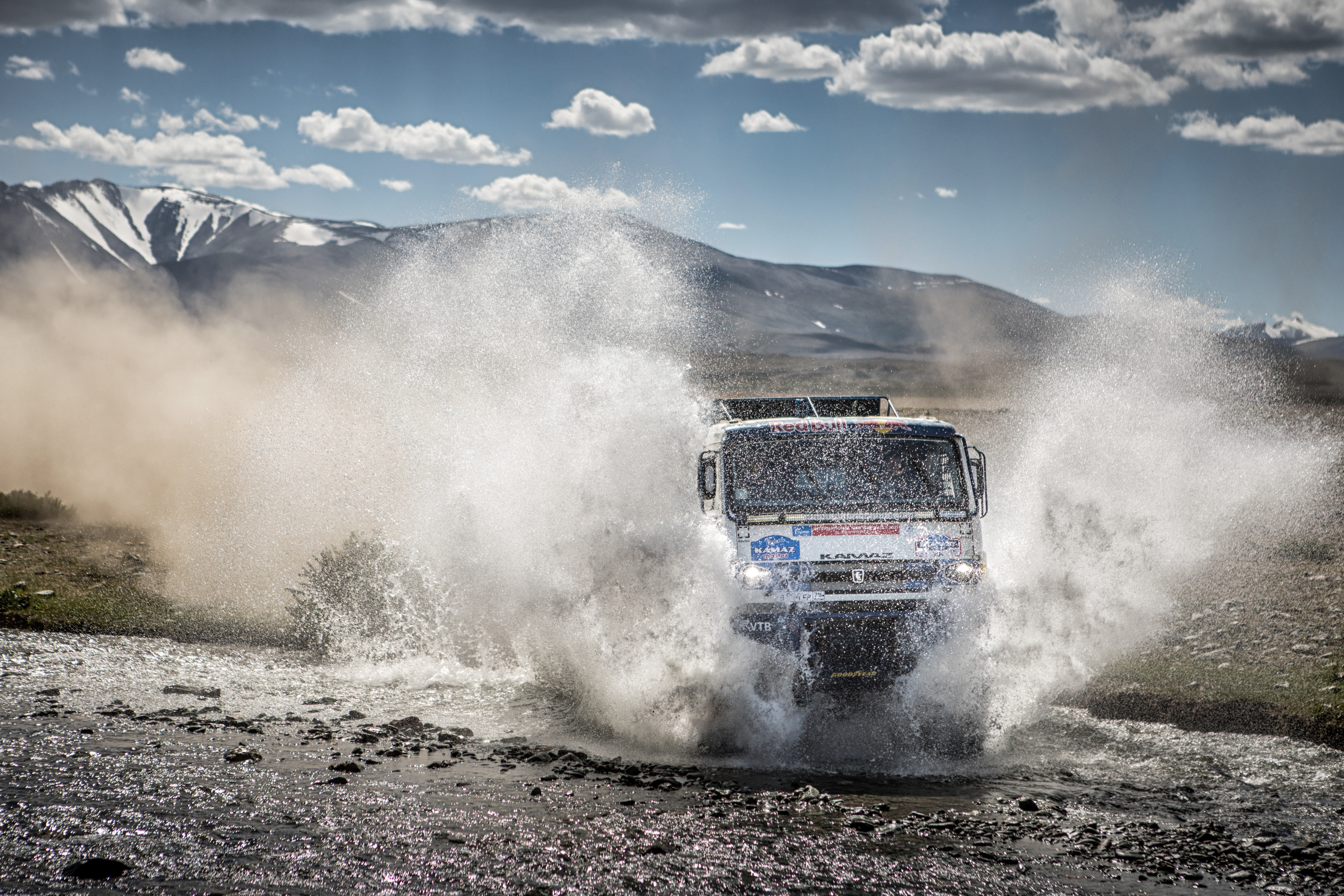 Dmitry Sotnikov, driver of crew No 501: “On the last 6-7 kilometers there was a winding road, all covered with vegetation. The road went sharply to the left and then divided into two. I decided to take more to the right and turn sharp, and when I had already arrived, I saw that there was a ravine. We began to slow down and stopped, coming up against a sheer earthen wall. The damage was minor, it was plastic that had been crumpled. Today we overcame the fords with restraint, we could not waste time. We saw Karginov's truck, honked him, but they showed us to go further. We also didn't have any spare parts to help him. The first part of the track was heavily broken, and fesh-fesh - nothing was visible because of this. We were lucky that leaving the rut, we caught a large stone, but it did not damage the tire. After that, we began to drive more accurately, especially when Anton Shibalov and Siarhei Viazovich appeared behind us. We began to carry out a tactical struggle, to go at the same pace with them."

Airat Mardeev, driver of crew No 505: “At the 20th kilometer we punctured the front right wheel, drove further on pumping. Approximately 30 kilometers before the finish we punctured the rear right wheel. It's good that the system coped with it and we got to the end of the special stage. We lost a little time, driving behind Sergey Kupriyanov - we followed him in the dust, overtaking him for a long time. And when we crossed one of the fords, he stopped and let us ahead. It's good that we found our own pace, which we could not do in the first days of the race. We cut a lot to show a good result. We drove at a maximum speed. Stones were very dangerous, one also had to be careful with hidden points that were not written in the road book: to drive strictly to the intersection according to the odometer, take the point and turn. Even if you see a cut, you cannot move out. This is an interesting feature of the Silk Way Rally, there is no such thing on the Dakar. It's a good experience for navigators and drivers."

Andrey Karginov, driver of crew No 507: “While overcoming the ford, we damaged the cooling fan of the main radiator. We lost about an hour for the replacement. We were coping on our own and there was no need to stop the guys for help. In total the day was good, we started first in the overall, tried to go fast. Although the route remained the same, we were looking for new trajectories, and there were a lot of stones. We avoided punctures today, but a sad breakdown threw us far back in the table. "

Siarhei Viazovich, driver of crew No 502: “Today we drove against Karginov and Nikolaev, the stage was definitely successful for us - we should move up to the second place in the general classification. Both KAMAZ-master drivers lost time, which is good for us. We have completed the minimum program - we have kept our position, which we lost yesterday. The last stage of the race remains, and the fight for the podium will go with Anton Shibalov, but Dima Sotnikov is already far ahead. Dima is going faster, currently we cannot set anything against him. "