The second loop stage of the current Dakar was in the place Wadi Al Dawasir in the south-west of Saudi Arabia. Here, hundreds of kilometers from the kingdom’s capital, the marathon contestants must force march to the northern border of the Rub’ al Khali desert, which stretches for 1200 km along the Arabian Peninsula and is one of the largest in the world.

The new day in the race calendar turned out to be truncated. Due to the death of Paulo Gonçalves, the eighth stage was canceled for bikes and quads. And the evening briefing began with one-minute silence in memory of the Portuguese rider.

As the rally-marathon comes closer to its final point, gaps in the general classification grow as well. Before start of the eighth stage, Top 3 has pulled away at a decent distance - from the first in the truck category Andrey Karginov to the fourth in the rating  Ales Loprais for almost two hours. The Belarus Siarhei Viazovich, taking the third place, was losing more than 46 minutes to the Russian crew. And in order to stop the daily growing lag, he needs to attack. But according to the driver, on the straight sections his truck does not have enough power to keep up with KAMAZ trucks. 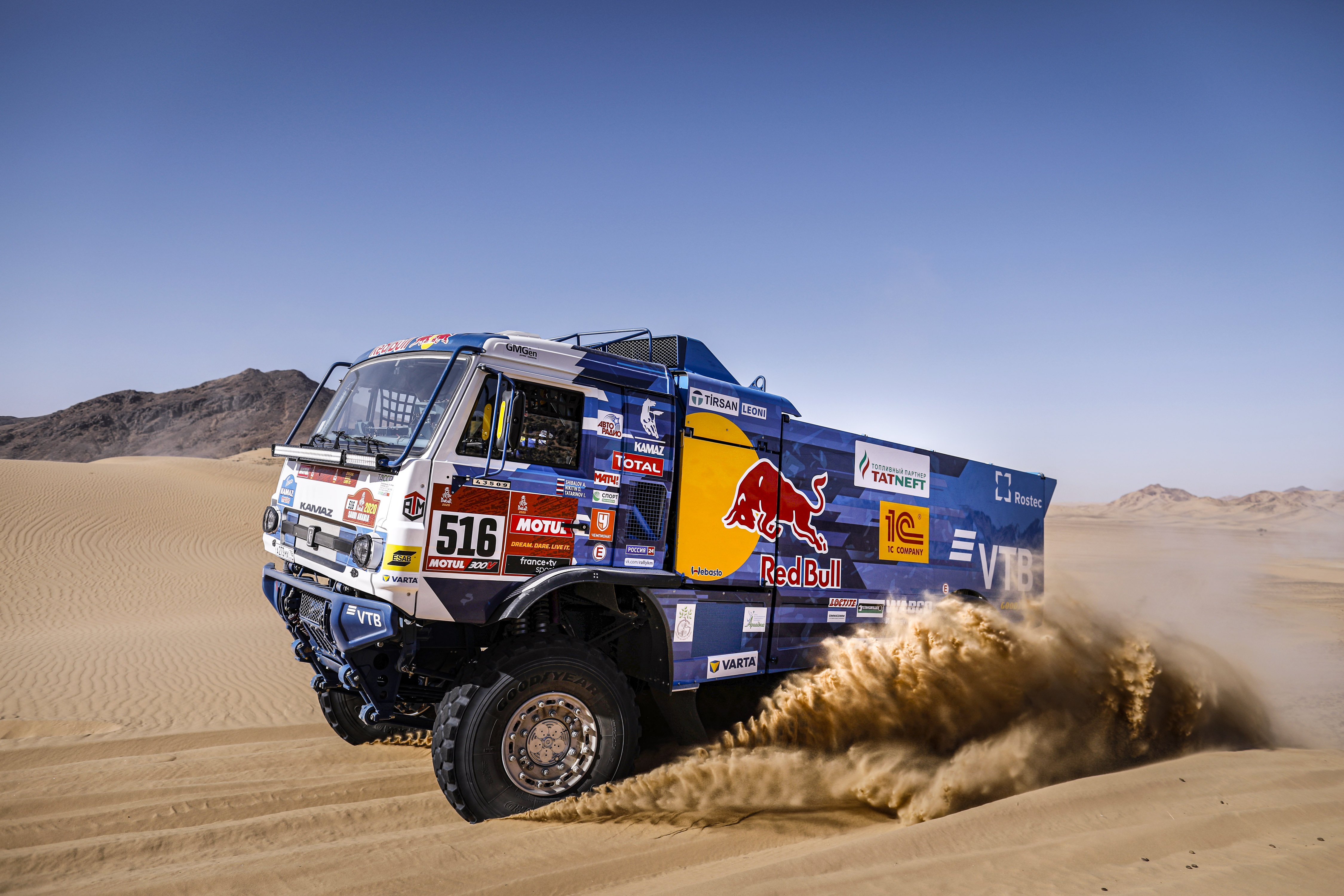 And today the rally organizers prepared a 40-kilometer straight section for the contestants, on which more powerful vehicles can gain an additional advantage in time. At the same time, it could be lost in numerous dunes and sands. What happened with most of the truck crews.

As in previous days, three KAMAZ-master crews were the first at the start of the 474-kilometer special stage in the truck category. The only difference is that Andrey Karginov, Dmitry Sotnikov and Anton Shibalov went on the route with a 30-second handicap from each other. The standings positions allowed Chelny citizens to drive fast, without unnecessary risk. Moreover, all three trucks went close and could count on back up in case of unforeseen circumstances. Eduard Nikolaev, who continues to perform on the Dakar in the separate classification Dakar Experience, started in 75 minutes. And he showed the best time at around 46 km.

Getting stuck in the dunes, Siarhei Viazovich stopped on the 80th km stopped, to the aid of whom came his teammates Aliaksei Vishneuski and Aleksander Vasilevski. The leader of MAZ-SPORTavto lost 13 odd minutes in this section. And the Dutch Victor Versteijnen, who a day earlier became the seventh, lost 41 minutes altogether. Janus van Kasteren lost more than half an hour at two stops. Three Martins had to dig in the sands - Macik was pulled out by Soltys and van den Brink, who got stuck himself a bit later and didn’t reach the finish line at the time of the release publication. The Russians had to draw on the help of trucks - Aleksei Shmotev on SSV and Saudi Yasir Seaidan on a car - both overturned their cars on the dunes. Not in vain the organizers had warned of tricky dunes and sands, to overcome which from the first try is a sign of high skill. 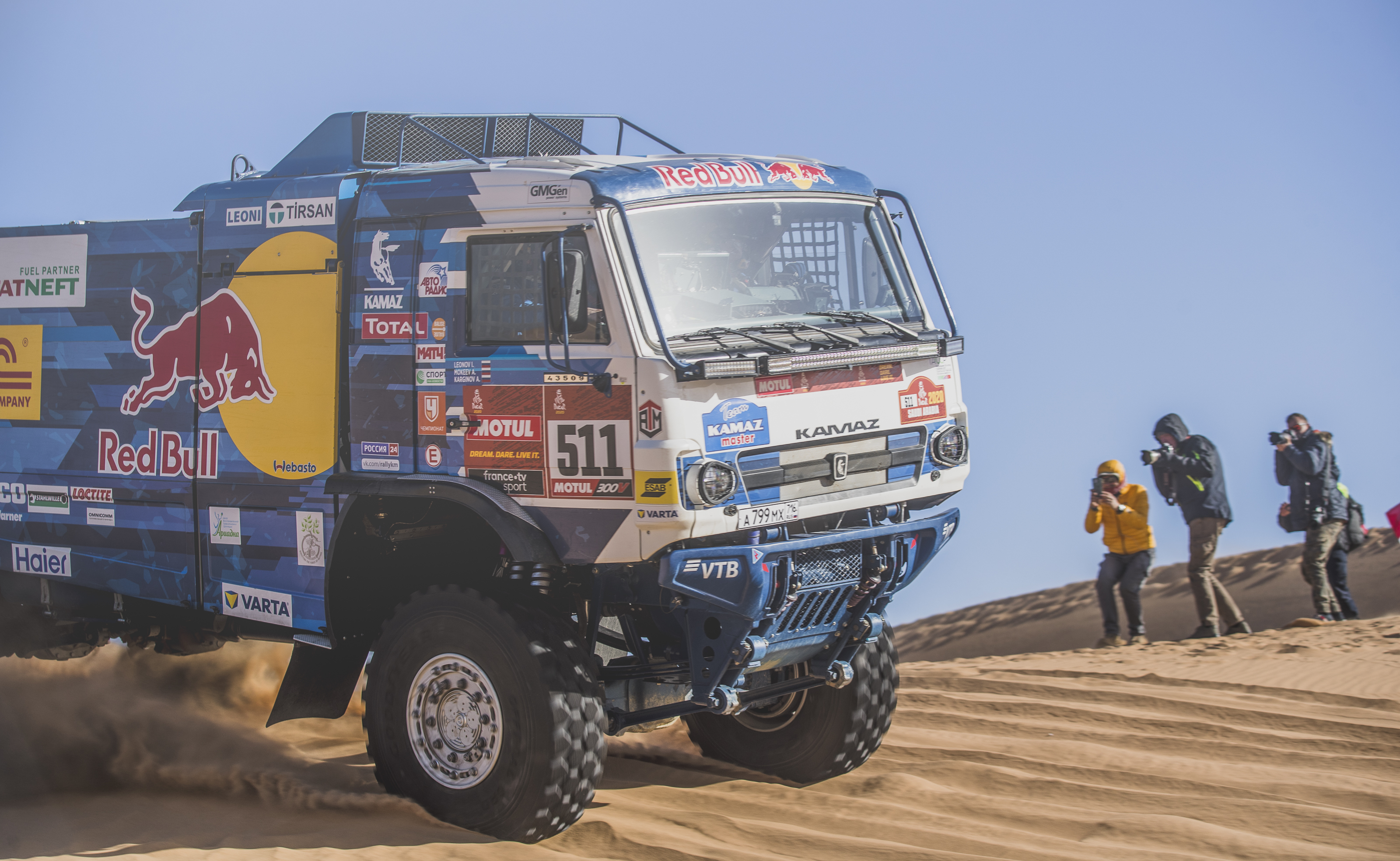 High dunes, alternating with a solid plateau, are a special challenge for the whole crew. And at these moments, the role of a mechanic is important. Throughout the day, he has to monitor the general condition of the truck, pump up or release tire pressure on time. Fact: it takes from three to five minutes to pump the wheel. And a mistake in operation can lead to rapid wear of rubber, which lead to a loss of time on replacing a wheel. Also, a driver and a co-driver should have the maximum concentration: the first - to cope with the dunes, the second to find the right course, when taking the natural barrier. On the 80 km Nikolaev’s crew stopped to replace the wheel. Racers lost 11 minutes, but showed the fifth result on the finish.

Evgenii Iakovlev, co-driver of crew No 500: “There was impassibility and on one of the hillocks we landed on the front left wheel directly to the stone. The air pressure in the tire was not high, because we just got out of the dunes. We changed the wheel for a long time due to problems with jacks, spent 11 minutes. Everything else was fine, we passed the dunes energetically and dynamically, especially the final part of them. Today we didn’t stray. We overtook a lot of the trucks. Before we reached the 80th kilometer, before puncturing the wheel, we saw standing Viazovich and his team partners. Then when we stopped to replace the wheels, they passed us by. And then we buried ourselves in the dust, but began to overtake trucks the second time." 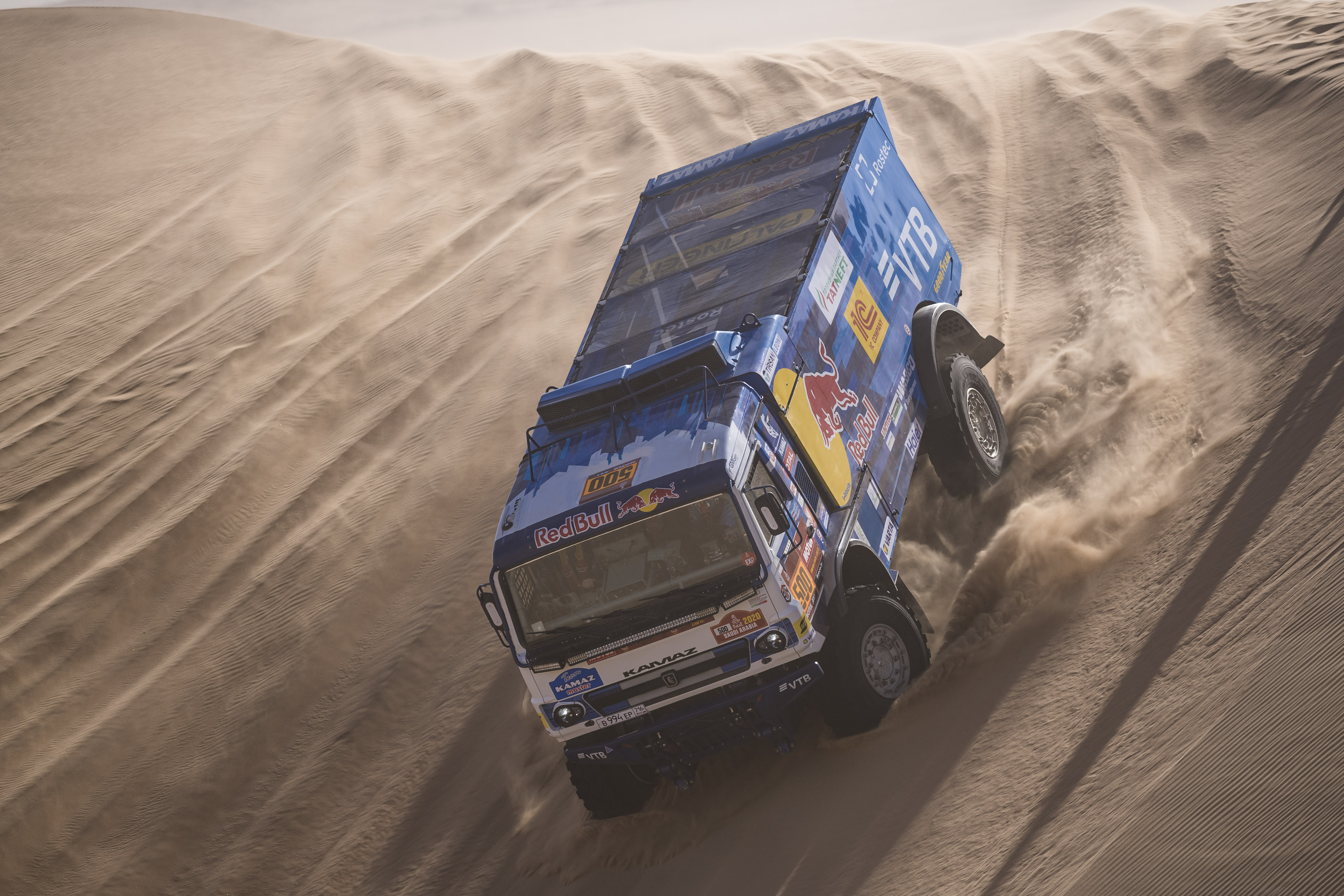 The best at the stage, for the fourth time in Saudi Arabia, was the crew of Andrey Karginov - 4 hours 24 minutes 58 seconds. Anton Shibalov lost almost 6 minutes to him.

Andrey Karginov, driver of crew No 511: “The start was fast, we passed the rocky section quite swiftly. We understood that we had a large gap and we had a cushion of time, therefore we drove quickly but safely, tried to keep up the pace. Dakar is not the last race, it’s important to improve your skills. Then began alternation of dunes and plateaus. We met challenging dunes that passed without difficulty. I remembered the 30 km course reference, there we had a maximum speed of 139-140 kmh. Then we drove another 15 km in this mode. We watched the tires, saved them. There were many tracks where cars were circling around, we had to be careful and self-collected, look for our own trajectory. We did not overtake at the stage." 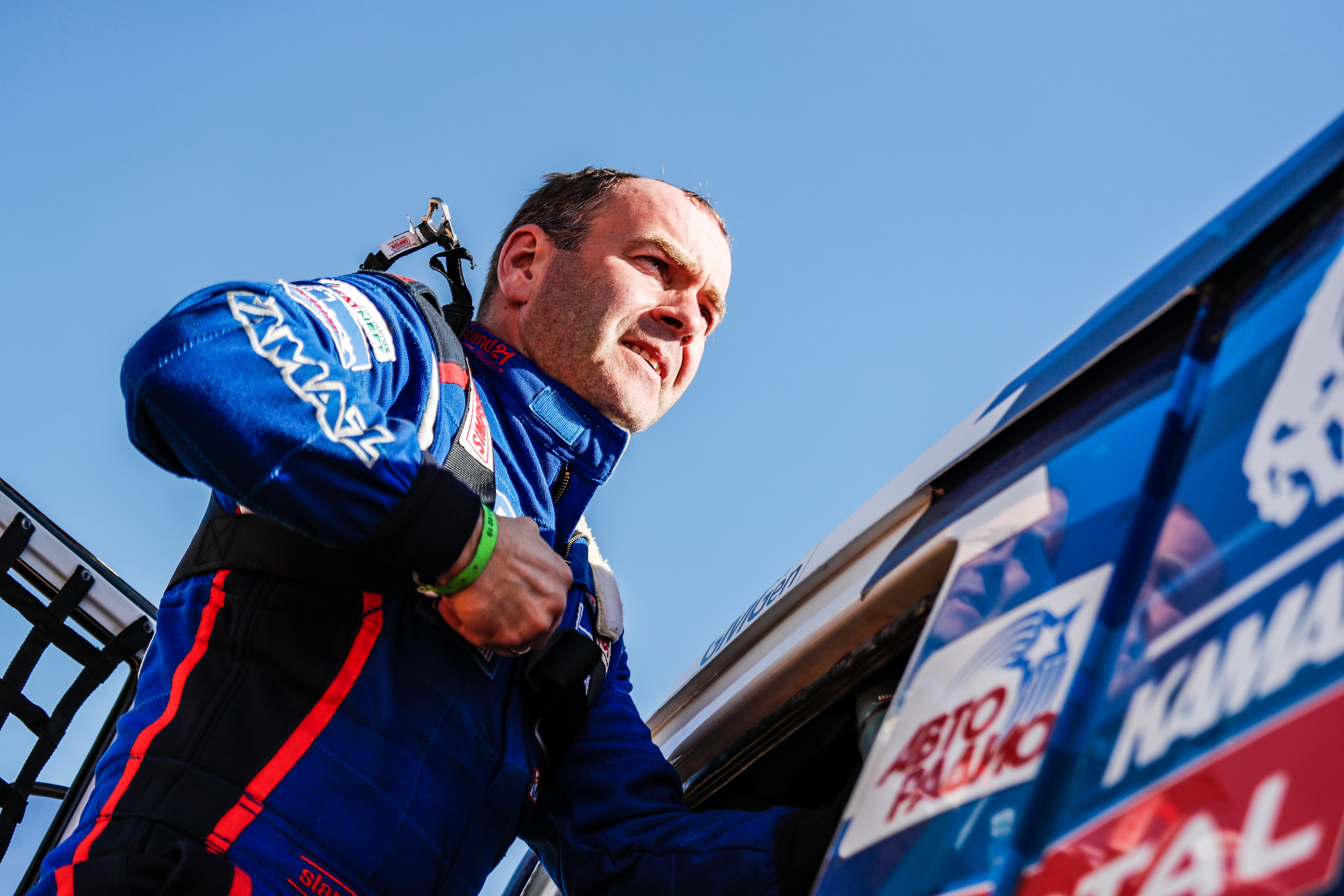 Showing the third time, Ales Loprais prevented KAMAZ from taking the first four places again. Sotnikov is only the fourth, but in the general standings crew No 501 moved up to the fifth line, overcoming Martin Macik.

Dmitry Sotnikov, driver of crew No 501: “The dunes are getting higher and higher, their complexity is growing. Those, that are higher, had a difficult terrain, and it was not always comfortable to cross them. It was especially difficult at the beginning, when the dune sections stretched for 3-4 kilometers, and there was the same distance of a hard plateau between them. We had to inflate pressure in tires on the plateau: speed was maximum, we had to save the wheels, and climbing a dune on the first kilometer was a danger of getting stuck, because the truck went very hard. On the second part of the route dunes were higher and more ridged, difficult descents. In places, we had to leave tracks of cars in order to overcome the obstacle more safely. At the beginning, when we let Anton Shibalov ahead, the cars intervened, they dusted. Then Loprais caught up, tried to go us around. Then we took on the same rhythm with Anton and till the finish went with him and with Andrey Karginov in the visibility distance. There were no problems with navigation, everything was clear. " 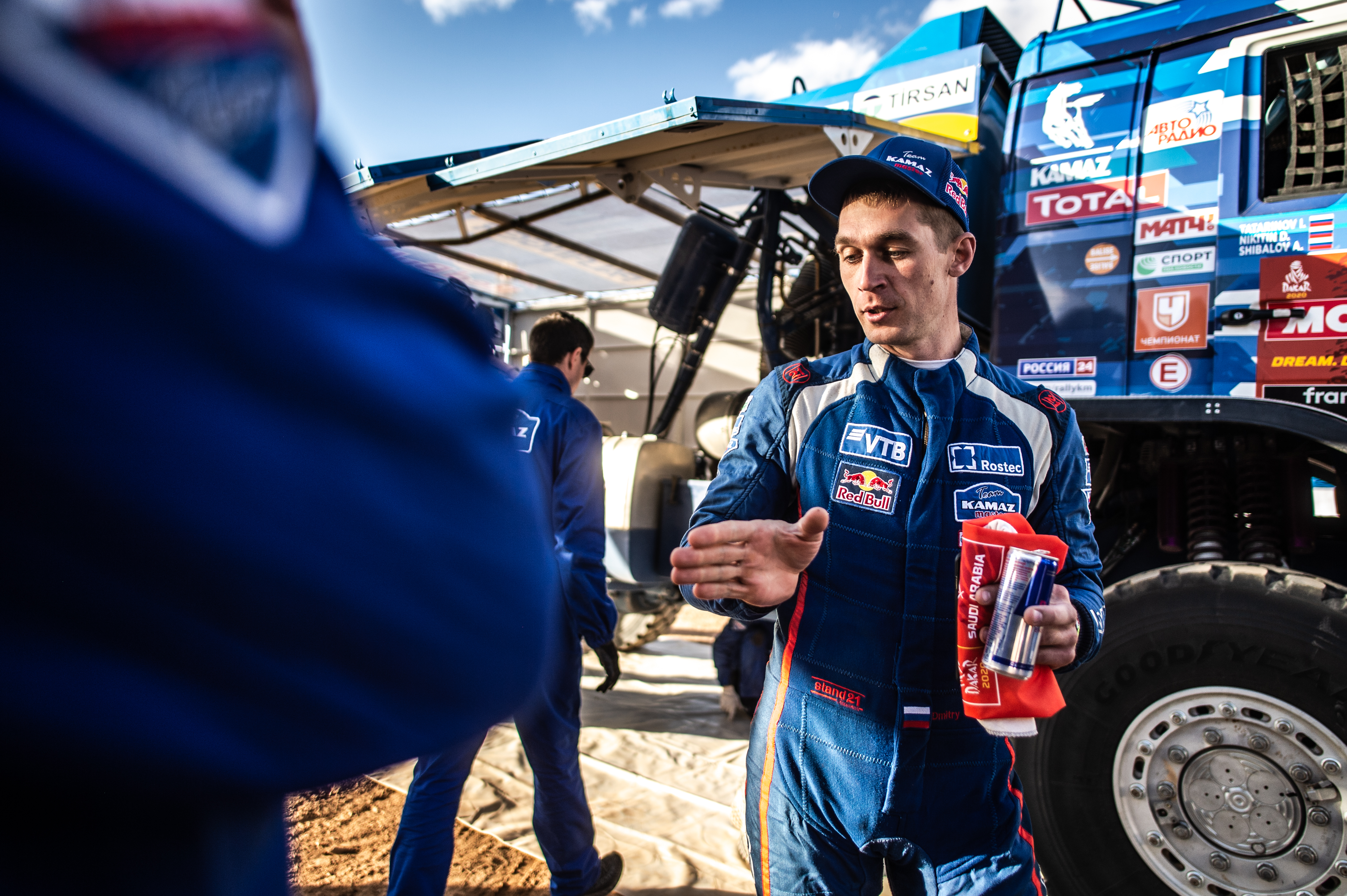 According to the results of eight stages, Karginov in the general classification is ahead of Shibalov by 27 minutes. Viazovich loses more than an hour to the Russians. The lag of the remaining contestants is more than two hours.

Anton Shibalov, driver of crew No 516: “Our crew worked in a team. Despite the fact that there was a fast section, a navigator had to be careful. On such days, a mechanic gets more work, he needs to change the pressure in the wheels, because the special section alternates with dunes and fast sections. Today there was one section of about 30-40 km - a straight wide road with no horizon. Just a flat sandy desert." 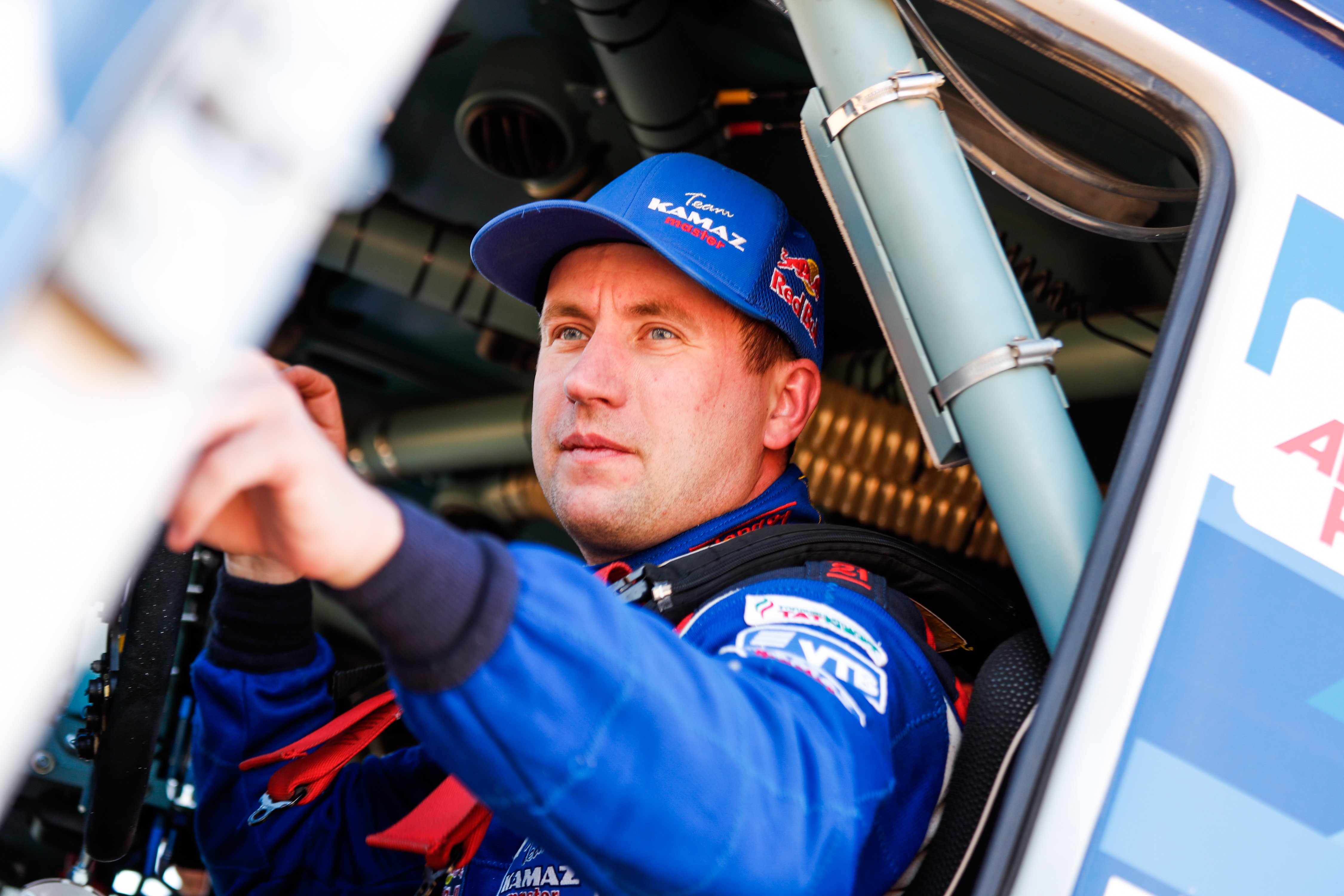 On Tuesday contestants of the Dakar 2020 will travel north-east of the Arabian Peninsula along the route of the ninth stage of Wadi Al Dawasir - Haradh. Its length will be 891 km, 415 of which will be special. Racers will enter the Rub’ al Khali desert for the first time. 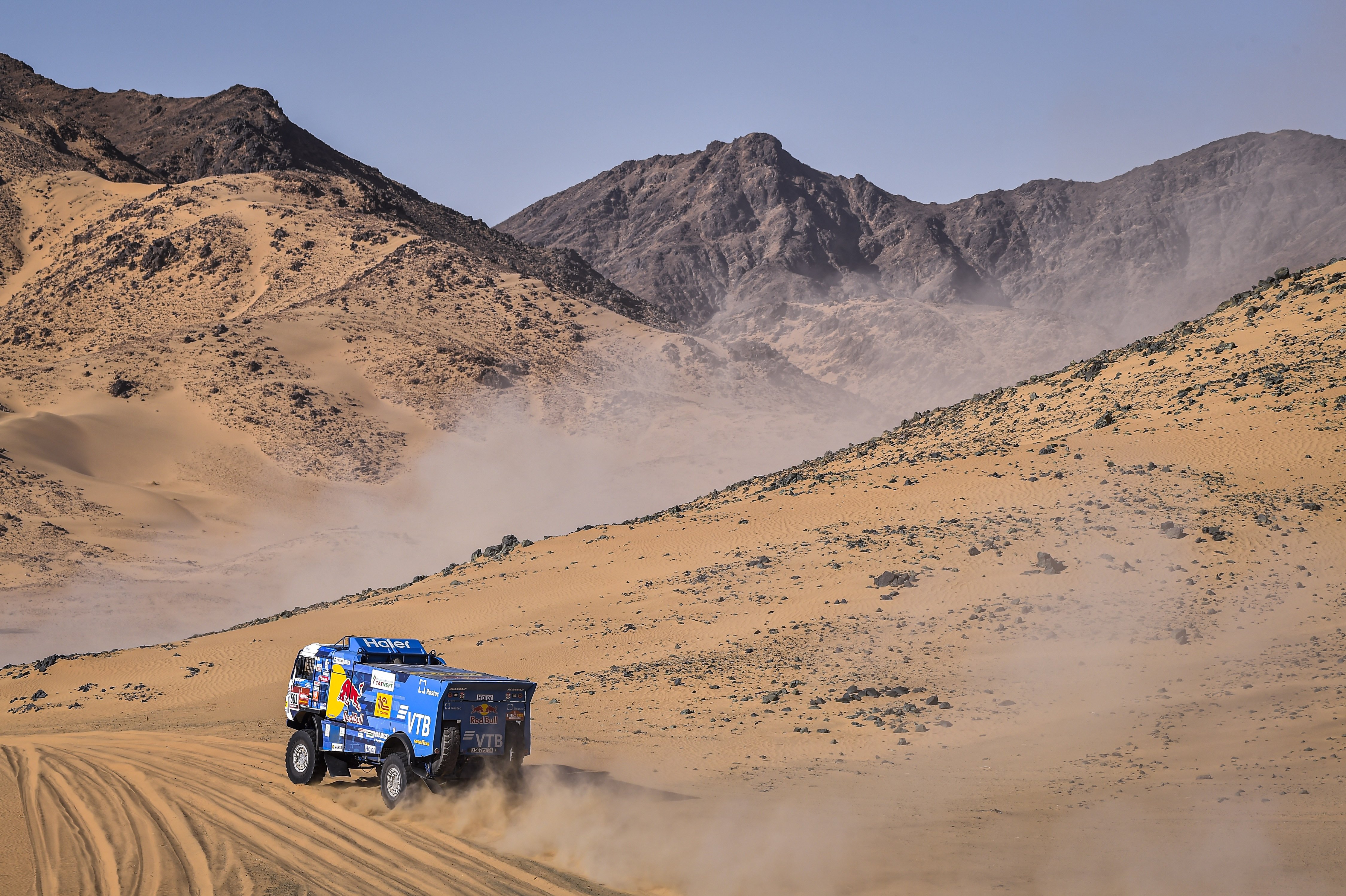