Andrey Karginov set his personal record on the Dakar Rally 2020

The ninth stage of the international Dakar Rally 2020 in Saudi Arabia took place along the route Wadi Al Davasir - Haradh on Monday, January 14.

Having started on the Red Sea Coast in the west of Saudi Arabia 10 days ago, the rally caravan is going to the east of the kingdom. At the end of the ninth stage the race contestants were awaited by the bivouac in the city of Haradh - one of the oil producing capitals of the world with a population of more than 100 thousand people. Haradh is also known as the gate to the Rub’ al Khali Desert, which is translated from Arabic as an “empty quarter”. From this point in Saudi Arabia it is easy to get to most of the Gulf countries. By the way, the city is located just over 200 kilometers from Qatar and the United Arab Emirates, located on the coast. The distances by the Dakar standards are like a drop in the ocean, or rather, in view of the terrain of the country, a grain in the desert.

Route of the special stage returned the athletes to a rocky area, located at an altitude of 1100 meters above sea level. After the "rest" on sandy and dune stages, the racers again had to overcome dangerous labyrinths, covered with many sharp stones, which again and again strove to cut tires of bikes and cars. It was a real trial. Therefore, the first part of the distance set the main task for the racers - to keep the tires unscathed, without losing the race pace. 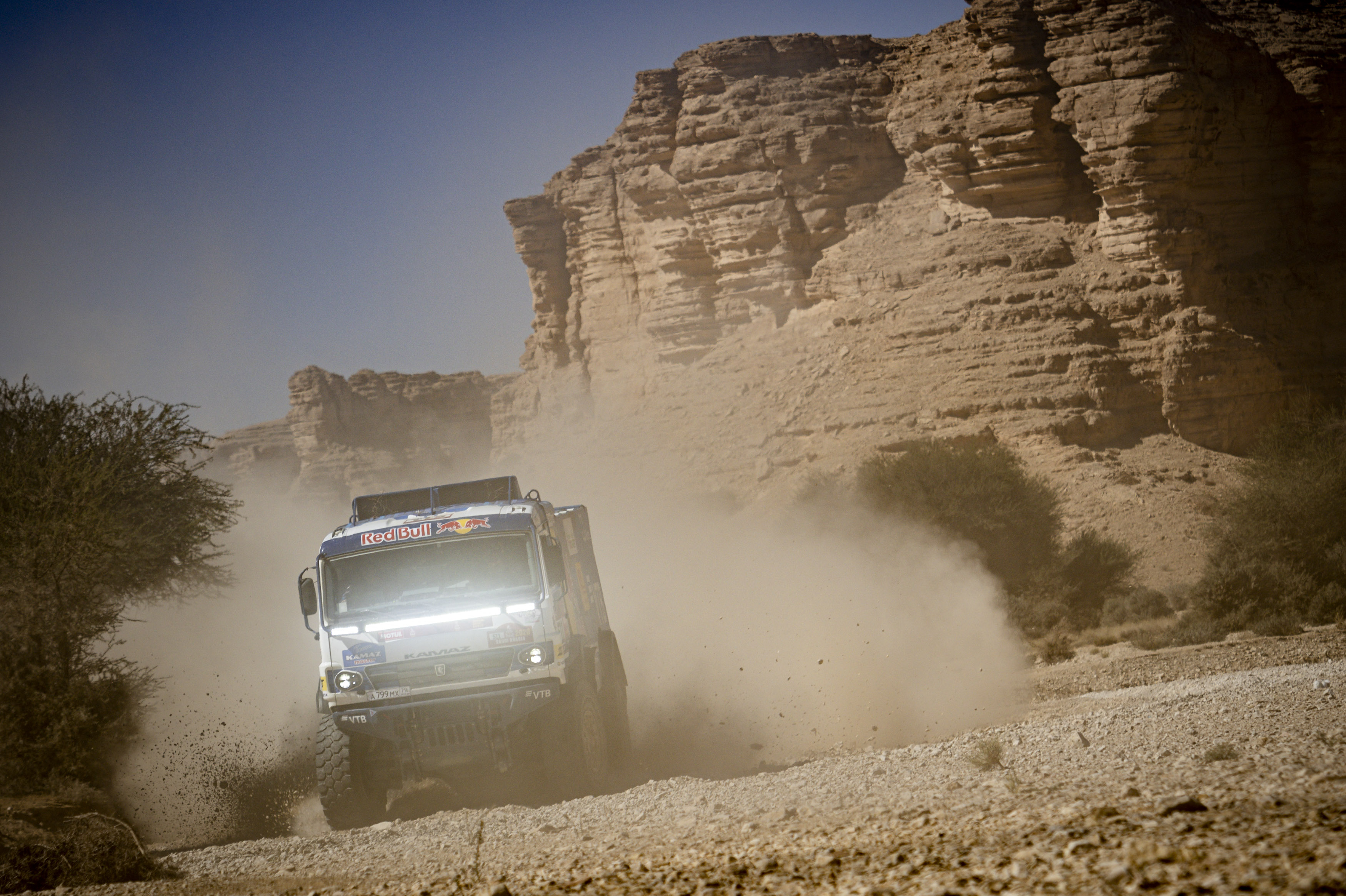 The ninth stage was the longest on the Dakar Rally 2020. Its length, taking into account the liaison, was 891 km. Andrey Karginov and Anton Shibalov, followed by Ales Loprais and Dmitry Sotnikov, were the first to conquer the 415-km special section. Very close was the main rival of crews No 511 and No 516 for top positions in the general classification Siarhei Viazovich. Already on the first kilometers Shibalov faced a puncture. Several cars got stuck in a narrow canyon, therefore the rally directors sealed the channel. The crews had to go round on a steep mountain climb, that led to Shibalov run into a sharp stone. Sotnikov’s crew came to help the teammate. After quick carrying out necessary works, both trucks went on.

Today, the crossing point of the race channel with the assistance route was on the 169th km. In the service area, located directly on the highway, the crews were allowed to receive help of mechanics, whose main work was to replace the wheels. Two more Russian trucks faced this problem: Andrey Karginov cut two rear wheels, Sotnikov cut one. Taking a breath after the toughest section with its hard terrain, which became a test for vehicles and a serious load on racers, the athletes continued their way to the finish line. 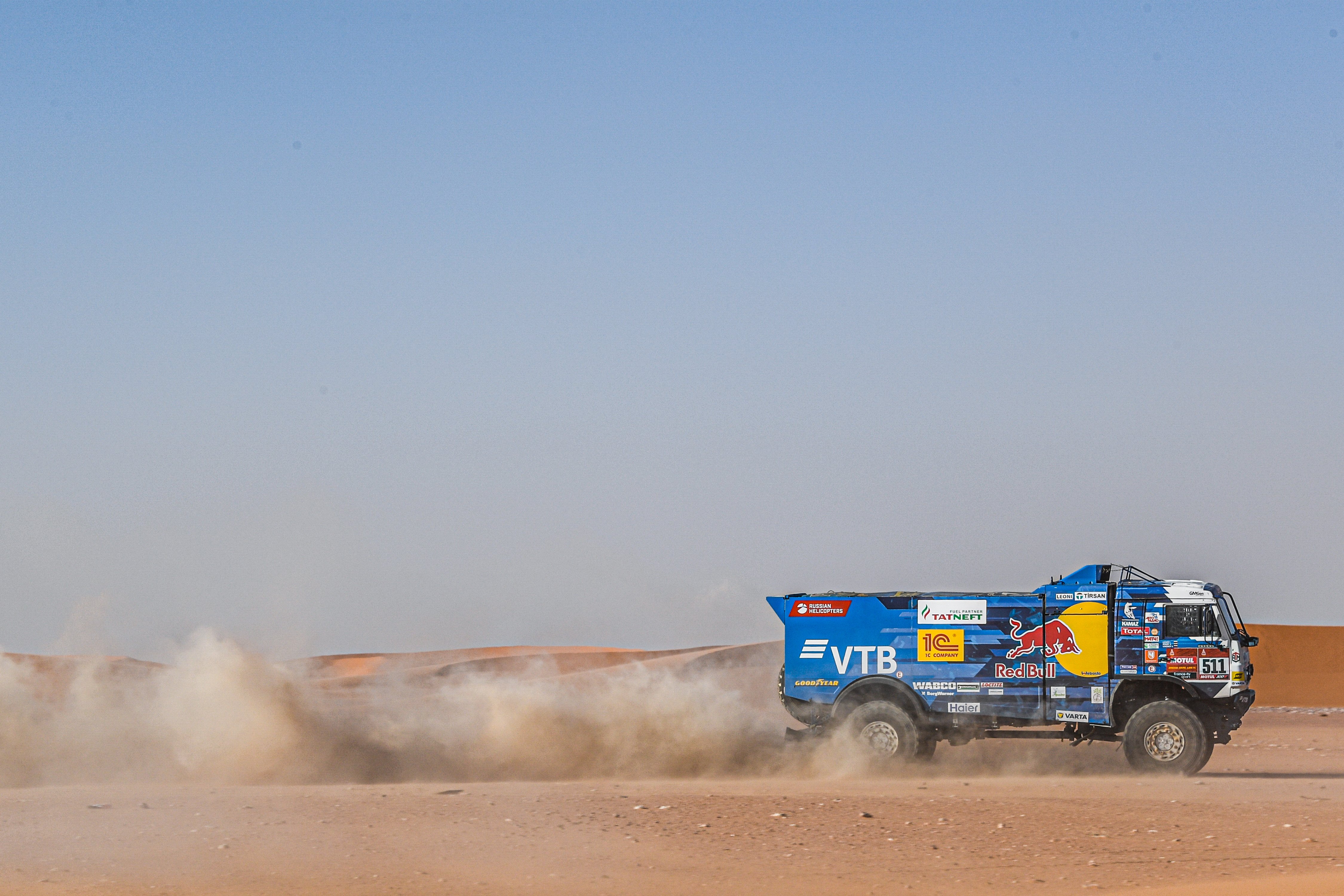 The second part of the route, the finish point of which was more than 700 meters below the start, passed in high-speed conditions along dirt roads and sands. Despite the fact that the dunes were only 5% of the track, a loss of vigilance could easily lead to a rollover or getting stuck. And if the Dakar contestants at yesterday’s stage only crossed the border with the powerful Rub’ al Khali Desert, today they have already left their traces in its sands.

As in previous days, Andrey Karginov was more steady and faster than anyone else in the truck classification, driving from point A to point B, that confirm his intention to compete for the second Golden Bedouin in his career. At the finish of the special stage, his time was 3 hours 33 minutes 42 seconds, fixing the Russian’s record fifth victory on stages of the Dakar 2020. The previous achievement was established in 2014, when Karginov won four stages.

Andrey Karginov, driver of crew No 511: “The beginning of the stage was fast, we had to cut in some sections, because everyone was driving at a maximum speed and we had to look for other advantages. Then small dunes started, which the organizers warned about. The engine stopped, we started it and drove further. If we had a manual gearbox, we wouldn’t have to stop - we would have started the engine on the move, but with automatic transmission we had to make a complete stop. We lost a few seconds. The last 100 km were at the maximum speed, the whole horizon fused as if it was a flat track, and obstacles were only seen when we drove up to them. Today the truck caught it seriously. The roads that were in the past stages were a real test for the truck, they showed that the vehicle was coping with them. The main dunes will start tomorrow, we are looking forward to them." 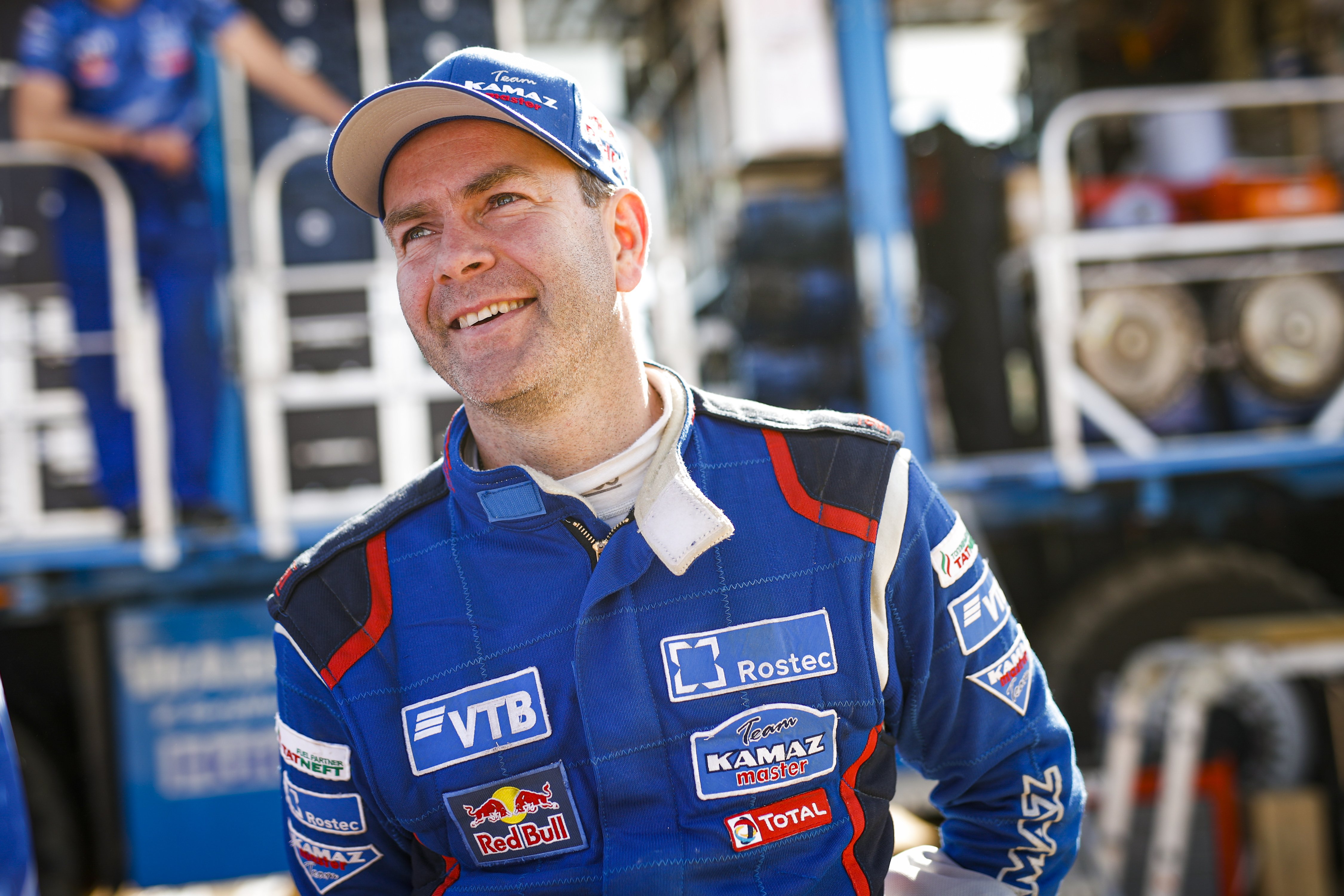 The second result of the day was shown by Siarhei Viazovich, driving the bonnet truck. The Belarusian crew was 3 minutes 19 seconds behind and became the only one who was able to keep the high pace of Karginov. Thereat, the final kilometers almost costed MAZ an accident - the truck on hilly terrain was close to overturn through the hood, but the drivers could get out of the tight spot. The real decoration of Tuesday was a battle for the third position. In a tough struggle it was taken by Eduard Nikolaev. Following him, at a distance of 43 seconds, were Ales Loprais (going third during the whole stage, at the end the Czech had to slow down to 15 kmh due to technical problems), Gert Huzink and Dmitry Sotnikov.

Dmitry Sotnikov, driver of crew No 501: “It’s not an easy day for us. Anton punctured a wheel at the beginning of the special stage. We helped him, then tried to catch up with Loprais, but he was fast today. Wewillprepareforthemarathon.” 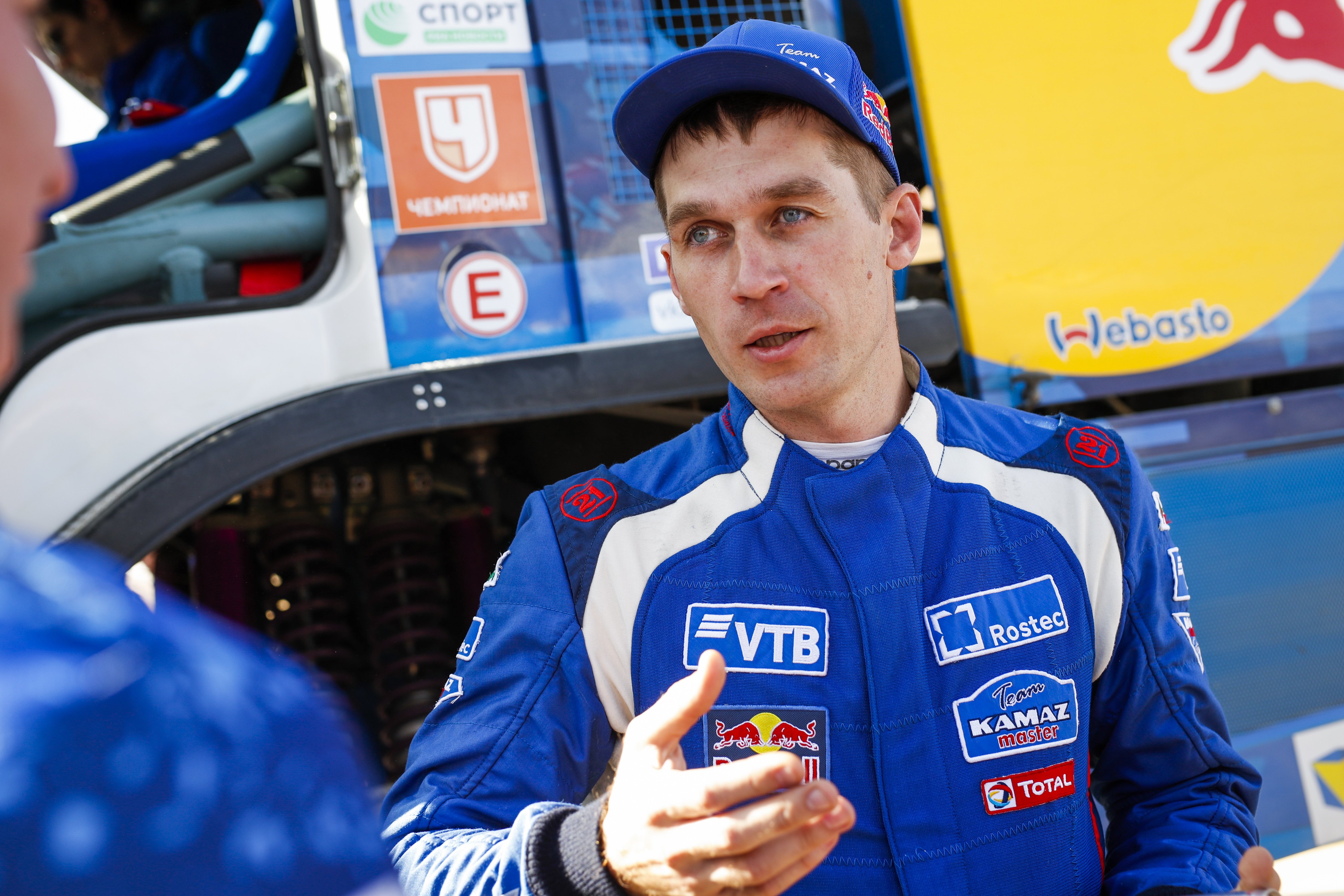 Seventh position against Anton Shibalov was won by Aliaksei Vishneuski - they were separated by 24 seconds. The results of the race day did not change the top 10 of the general standings.

On Wednesday the first part of the marathon stage along the route Haradh - Shubaytah awaits the contestants of the Dakar 2020. Its length will be 608 km, 534 of which will be a special section, going to the southeast. The racers will spend the whole day in the Rub al Khali Desert: its beginning will take place in vast sandy expanses, and they will have to overcome dunes for the final 30 km. Their height can reach 250 meters. Upon arrival at the bivouac, racers can rely only on themselves and other sportsmen at the repair. The help of mechanics is prohibited on the 10th stage of the competition, the entire race camp will stay in Haradh and wait for the racers to return on Thursday. 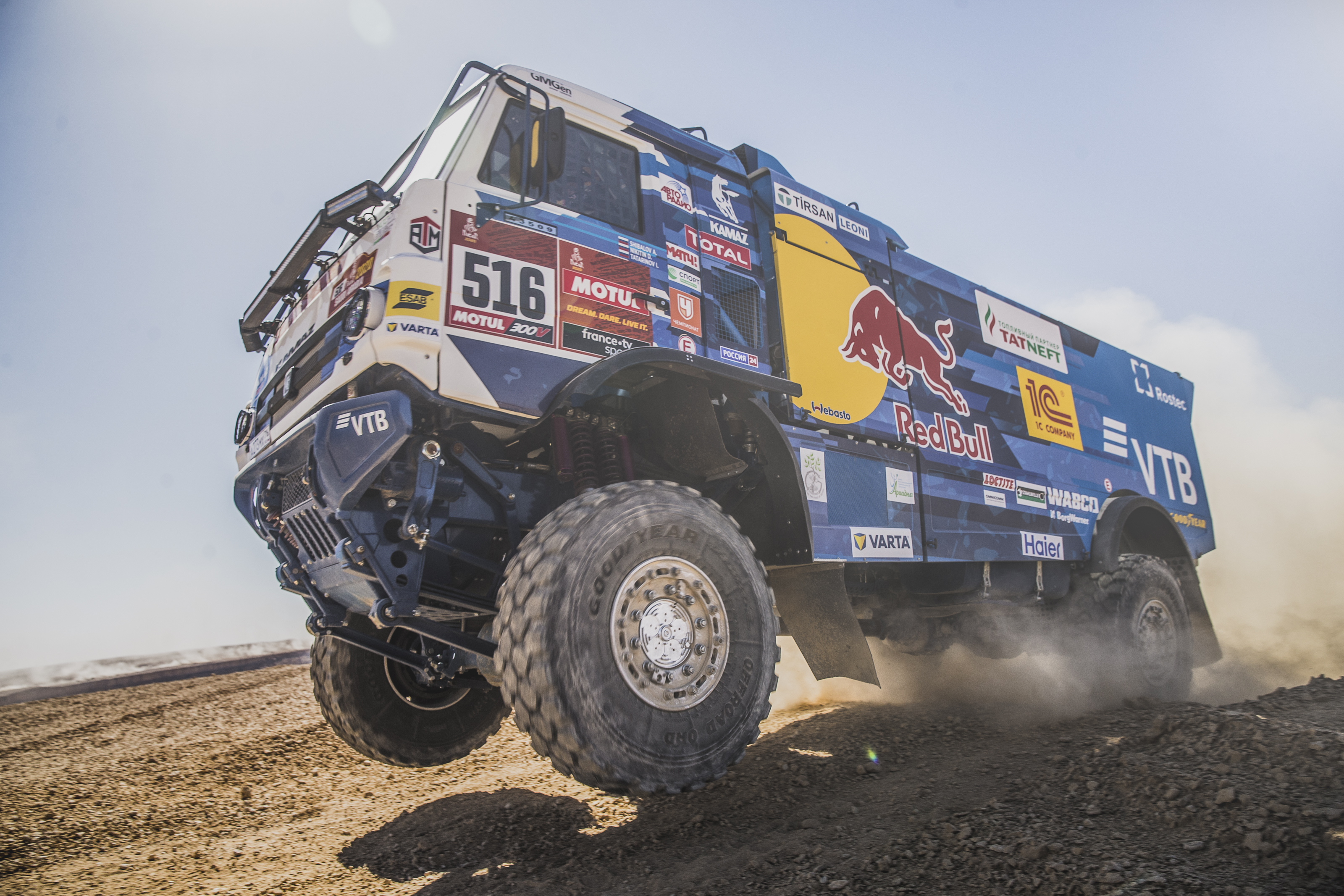